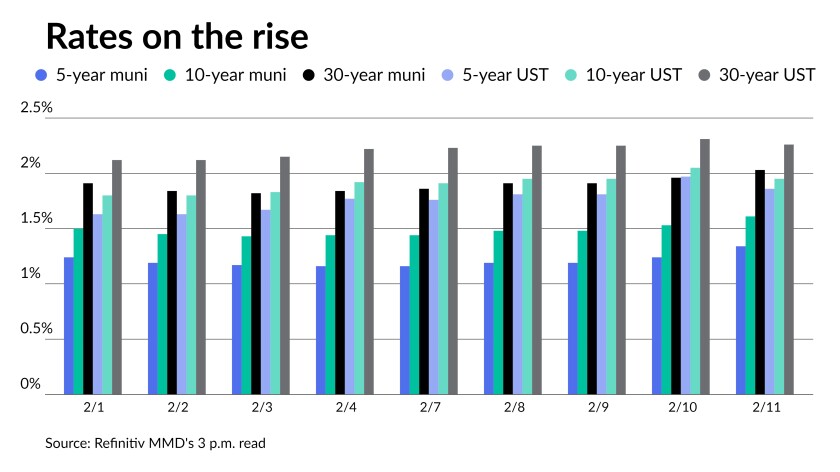 Munis sold off, playing catch-up Thursday’s U.S. Treasury selloff, while taxables pared back some of those losses in a flight-to-quality bid Friday as equities were hit hard on U.S.-Russia tensions.

“This is not surprising given the significant outperformance versus Treasuries yesterday with the largest single-day move in the two-year Treasury since 2009,” he said Friday.

The municipal market continues to grapple with the prospects of higher inflation and, in turn, higher interest rates, according to Golden. “While it is understandable that valuations/ratios would widen out on the heels of the Treasury selloff yesterday, the silver lining for municipals remains their resiliency in the face of volatility,” he said.

“We would expect the relative outperformance versus corporates and Treasuries to continue,” Golden added.

A little more than a month into the new year, elevated bid-wanted flows have allowed for a shift to more of a buyer’s market.

“Buyers now have the freedom to be more selective in adding both credit and duration risk,” Golden said.
Golden said a flattening yield curve must have the Fed’s attention “and they will be walking a tightrope, balancing and trying to combat inflation with not tightening financial conditions too much.”

“With inflation running hotter than we have seen in decades and action by the Fed seeming imminent, we believe municipal investors must be cautious here,” Golden said.

The volatility of Treasury rates will inevitably be more significant for munis until they settle into more stable levels, BofA Global Research strategists said.

“The Fed’s rhetoric and aggressive market pricing of short-end Treasuries have kept long-term Treasury yields in check and resulted in a significantly flatter Treasury curve,” Yingchen Li and Ian Rogow, BofA Securities strategists said. “At this point, the market has assigned a 50% probability that in March the Fed may hike 50 basis points instead of 25 basis points.”

The flatness of the Treasury curve has historically dictated how far the Fed will go, and it is likely to do so again this cycle.

With Treasury yields already much higher this year, Barclays strategists believe it’s difficult to expect strong performance from fixed-income assets, which have suffered losses across classes. Municipals, particularly the muni high-yield index, have been more defensive and have somewhat outperformed thus far, but they are far from out of the woods, said Barclays strategists Mikhail Foux, Clare Pickering and Mayur Patel in a weekly report.

Fund inflows reported this week were an aberration, they said.

Mutual funds have lost $5 billion in the last six weeks, the highest level of outflows since the COVID-19 pandemic began in March/April 2020. They said while there were 20 months of inflows in the subsequent rebound beginning in May 2020. A new outflow cycle began this year, spurred by a steep sell-off in rates amid inflation fears and a hawkish Fed.

Barclays strategists expect fund flows to remain anemic for some time, and similar to previous years, there could be more outflows next month, as investors generate cash to pay their tax bills in April and harvest tax losses for the upcoming year.

The new-issue calendar is about $5.19 billion with $3.622 billion of negotiated deals and $1.571 billion of competitive loans. The lower supply is being credited with keeping munis from seeing yields rise further.

Treasuries were better while equities ended in the red.

Inflation on everyone’s mind
While the Federal Reserve ponders how to rein in inflation, consumers’ weariness about rising prices becomes more evident.

The University of Michigan’s consumer sentiment index sank to its lowest level in a decade in February, 61.7 after posting a 67.2 read in January. Economists polled by IFR Markets expected a bump to 67.5 in the month.

The survey’s chief economist Richard Curtin said, “The recent declines have been driven by weakening personal financial prospects, largely due to rising inflation, less confidence in the government’s economic policies, and the least favorable long term economic outlook in a decade.”

And, he noted, the drop in sentiment was fueled by households earning more than $100,000.

“The details of the report suggest weaker expectations around consumers’ financial situation was the main culprit behind the decline,” they said. “Consumers’ views of their finances versus a year ago fell to the lowest level since 2013. This shouldn’t come as a surprise when considering the massive amount of fiscal support reaching households at the onset of the pandemic has now ended, and households continue to contend with higher prices.”

While inflation should wane, they said, it won’t be for a “few months.”

Indeed, Morgan Stanley researchers, led by Chief U.S. Economist Ellen Zentner, said they raised their inflation forecasts, and expect Federal Reserve officials will do the same in their dot plot at the March 16-16 meeting. They said three factors led to their revisions, “a mark-to-market for higher inflation at the start of the year, updated component weights reflected in the latest CPI data, as well as a firmer path for shelter inflation resulting from continued pressures in rental markets.”

They see inflation, as measured by the consumer price index, peaking next month at a 7.9% annual rate and core also at its worst (6.4%) in February. “Early evidence is starting to appear, in both high frequency data on auto prices and our broader global supply chain index, which continue to point toward a turn in the goods inflationary impulse,” the Morgan Stanley researchers said. “As a consequence, we continue to see sequential declines in goods prices helping to bring down the sequential trend in overall inflation.”

But that doesn’t mean inflation won’t remain “elevated” on an annual basis most of the year. They expect in the fourth quarter, the annualized core personal consumption expenditures index will show a 3.2% gain, a half point higher than the Fed’s December expectations. “We expect a material upward revision of inflation in the upcoming March projections, which should be accompanied by a similar revision in the policy path from a median of 0.875% to as high as 1.625% — front-loaded inflation to be met with the intention to front-load hikes,” Zentner’s group said.

With inflation at its highest level in four decades, and “accelerating faster than most continue to anticipate,” Craig Erlam, senior market analyst, UK & EMEA, at OANDA, suggested the Fed may follow the Bank of England’s approach, with a number of hikes before summer, “then hope inflation peaks late in Q1/early Q2, as they anticipate, and falls significantly enough after to considerably ease the pressure.”

But markets are taking a pessimistic view, he said, “pricing in plenty more hikes in the second half of the year on the belief that the central banks will once again prove too optimistic.” While that may cause short-term stock market instability, he said, “it could become a useful tailwind in the second half of the year if inflation does fall considerably after peaking and allow for some of the interest rate positioning to be unwound.”

But Roosevelt Institute Chief Economist Joseph Stiglitz, said, “Although it is anyone’s guess what will happen next with inflation, the data show that there is no reason to react rashly with large across-the-board interest-rate hikes. The economy is working through an unprecedented transition that could ultimately be a boon for workers; but only if policymakers let the process play out.”

The biggest risk, he said, “is that central banks will overreact, raising interest rates excessively and hampering the nascent recovery.”

Since the pandemic poses unique challenges, “we can’t be sure of how things will evolve,” he said. “Nor can we be sure what to make of the Great Resignation.”

But raising rates is not the answer in Stiglitz’s opinion. “We should not attack a supply-side problem by lowering demand and increasing unemployment.” Instead, he suggested, “targeted structural and fiscal policies aimed at unblocking supply bottlenecks.”

Lynne Funk contributed to this report.

Sam Bankman-Fried’s trading shop was given special treatment on FTX for years
Coca-Cola FEMSA and Adidas AG: 11/30/2022 Bull & Bear
Is The Bay Area Housing Market Cooling Off?
EU warns Musk that Twitter faces ban over content moderation
These are shaping up to be the best and worst luxury real estate markets for 2023