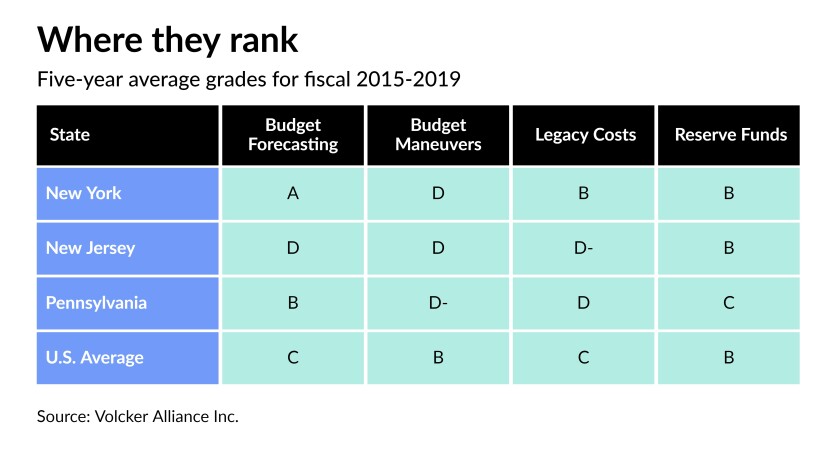 How much debt does New York State have outstanding and how is it issued? The answer for inquiring investors is “It may be more than you imagine.”

The nonpartisan Volcker Alliance released an issue paper on Feb. 3 that takes an in-depth look at the Empire State’s municipal bonds and other debts the state owes to the federal government and future state government retirees.

New York’s practice of delivering services through independent public authorities which issue bonds makes its overall debt structure more complex than most other states, according to the report, “New York: State of Debt,” written by Matt Fabian and Lisa Washburn of Municipal Market Analytics Inc.

The state and its entities, such as the New York Metropolitan Transportation Authority and the Dormitory Authority of the State of New York, have about $102.91 billion of municipal bonds outstanding. Its debt profile rises to $186.57 billion when the other liabilities such as unfunded pensions and OPEBs are added in.

Fabian and Washburn say the state’s borrowing practices have helped contribute to its D average grade fiscal years 2015-19 in what the report calls “Budget Maneuvers,” or one-time actions, that are used to balance its annual budgets.

New York is one of only four states to receive the second-lowest possible mark for its reliance on some of these potentially unsustainable maneuvers. The other three were New Jersey, Illinois and Kansas.

Despite an improving economy, New York’s use of one-time actions to achieve balance accelerated over the study period, they said.

The report is the first in a series of studies that will look at state and local budgeting in the COVID-19 era.

“Even with trillions of dollars in federal pandemic aid to the U.S. economy, COVID-19 has exposed new long-term fiscal challenges for states and municipalities,” says William Glasgall, the Alliance’s senior director, public finance. “As we have done in our annual ‘Truth and Integrity in State Budgeting’ evaluations since 2015, this issue paper identifies budgetary practices that need improvement and highlights best practices states and localities should follow to ensure their continued financial stability.”

DASNY ranked as the number one issuer of municipal bonds in 2021. DASNY sold more than $8 billion of bonds last year that funded school districts, higher education and non-profit organizations.

Writing in a commentary piece for The Bond Buyer, Fabian, Glasgall and Washburn said there are two sides to the state’s indebtedness.

“Without borrowing, the Metropolitan Transportation Authority wouldn’t have been able to keep the subway running during the COVID-19 pandemic and the state unemployment trust fund wouldn’t have had enough cash to pay the benefits that kept many residents afloat during layoffs,” they write.

However, the state has been a habitual user of debt to balance its budgets, something they have said is a fiscally risky strategy avoided by most other states.

“Under New York State’s diverse debt structure, investors may have made artificial distinctions among state borrowers and overallocated their portfolios to bonds from New York issuers than their usual limits on risk might otherwise allow,” the paper says. “This may pose challenges for New York in a fiscal or financial crisis. In such a crisis, investors might ignore distinctions among securities — as they did in the Detroit and Puerto Rico bankruptcies — and spark a selling wave just when the state would most need access to credit markets.”

Looking at states that use traditional debt practices, like California, Florida, Michigan and New Jersey, the paper recommends a series of reforms New York can undertake.

The reforms offered include having the state clearly show which debts are the direct responsibility of state government, adopting administrative controls over the overall debt portfolio and increasing transparency over all categories of debt.
In addition, the paper recommends New York’s unfunded liabilities, such as retiree health care, should be consolidated into existing debt limits for better management and oversight.

The paper also urges the state to create a centralized entity to collect data on all state debts.

In a webinar the Alliance held on Thursday, Fabien said that while the state’s debt load is high this doesn’t mean that more debt is necessarily bad.

“The question is always about whether there is transparency with respect to the borrowing and is the borrowing paid for?” he said.

Additionally, New York has historically shied away from asking voters to approve bond referendums for general obligation debt because of the perception of a debt-averse electorate that’s wary of future tax increases tied to the full faith and credit pledge on the bonds. So the state has sought to find other ways of raising capital without going to voters, such as creating a personal income tax revenue stream structure to issue bonds.

“You would think that the voters would be a hurdle to being able to issue debt, which is the reason that many of these other states use these other forms of debt to evade the limits on general obligation debt,” Washburn said. “But we found that that’s not the case at all in California. The voters have been very accommodating in terms of approving debt.”

Speaking Thursday at Cornell University, Gov. Kathy Hochul noted her new initiatives for environmental programs will be buttressed by a $4 billion GO bond referendum that voters will decide on in November.

“We have an opportunity to really make a mark. Not just on our state or on our county but on our planet by the decisions we are making today,” she said.

She added that the state was pushing to build resiliency into its infrastructure and was requiring buildings to adopt green policies.

“But it’s also about putting money on the table,” she said.
The state’s bonding totals don’t include debt issued by New York City.

At of the end of the second quarter of fiscal 2021, the city had about $38.57 billion of GO debt outstanding, not counting the various city authorities that issue debt.

The city’s GOs are rated Aa2 by Moody’s, AA by S&P, AA-minus by Fitch and AA-plus by Kroll.

In the Big Apple, the mayor and comptroller have been on different sides of the debt debate, with a proposal by the mayor to raise the debt capacity of the NYC TFA causing a rift between the two men.

Mayor Eric Adams has asked for state legislation to increase the amount of debt the TFA is allowed to issue. City Comptroller Brad Lander opposes the request, saying additional bonding capacity is not necessary at this time.

Testifying before the state Legislature in Albany on Wednesday, Adams asked for state support “to authorize an increase in the Transitional Finance Authority’s borrowing capacity to return the city’s debt incurring power to its pre-pandemic level.”

He noted this was not the same proposal former Mayor Bill de Blasio made two years ago.

“This is not the borrowing request proposed in 2020, which requested borrowing authority to cover operating expenses,” he said. “This new request is for the city’s capital program, and is necessary because of reduced commercial property values, which is tied to the borrowing capacity for our capital program. This costs the state nothing and will provide support for the city to carry out its much-needed long-term capital plan.”

He also requested that the state codify the Debt Service Provision into state law in order to maintain the city’s strong credit ratings.

“This will be important to signal to investors that New York City will always be a safe investment,” Adams said.

Lander refuted the need for an increase in TFA bonding capacity during his testimony.

“I urge you to reject the city’s request to increase the Transitional Finance Authority debt limit by $19 billion, more than doubling the current authorization of $13.5 billion. This request is premature — city projections show sufficient borrowing capacity over the next three years,” he testified. “Any request to increase the city’s borrowing capacity should be predicated on a clear assessment of the city’s infrastructure needs, available sources of funding, and shortfalls in current capital project management plans.”

Stocks making the biggest moves premarket: Intel, Chevron, American Express, Silvergate and more
HMRC admits errors in responses to FoI requests over ministerial probes
Why are Bitcoin and crypto pumping after the Fed meeting? Watch Market Talks live
60 Organizations Launch Campaign Urging US Congress to Protect Privacy
What is a ‘rolling recession’ and how does it affect consumers? Economic experts explain