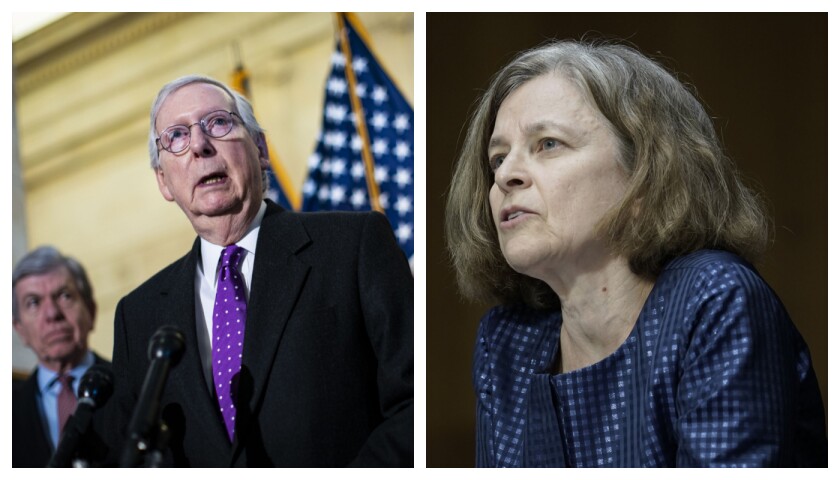 Republicans’ procedural blockade of President Biden’s Federal Reserve nominees has left Senate Democrats with few options and could delay for months the revamp of the central bank’s board, according to analysts and political strategists.

The 12 GOP members of the Senate Banking Committee decided not to show Tuesday for a scheduled vote by the panel, preventing a quorum. They primarily object to the nomination of Sarah Bloom Raskin for Fed vice chair for supervision, having raised concerns about her views on tackling climate-change risk in the financial system and about her involvement in a fintech company after an earlier stint in government.

The move also left in limbo the renomination of Jerome Powell for Fed chair and the naming of Lael Brainard to be vice chair as well as Lisa Cook and Philip Jefferson to be governors. (Powell will continue to serve as chair and Brainard as a governor in the meantime.)

The White House on Wednesday slammed Republicans for boycotting the committee vote.

“Republicans are AWOL on the fight against inflation at this pivotal moment in our economy,” said White House press secretary Jen Psaki during a press briefing Wednesday afternoon.

“Everyone understands we need a full Federal Reserve board.”

Psaki also said the White House was opposed to breaking up the package vote to gain support from Republicans. “We believe Republicans need to do their jobs and show up to vote for these nominees,” she said.

Senate Banking Chair Sherrod Brown, D-Ohio, is determined for the nominees to be voted on together because all five are qualified and are needed to fight rising inflation, his office said in a statement Wednesday.

Brown’s success may hinge on Raskin’s ability to meet with committee Republicans and provide satisfactory answers to their questions. They want to know whether she would interfere with oil and gas companies’ access to credit and whether she played any improper role in the granting of a Fed master account to Reserve Trust, a fintech on whose board she sat from 2017 to 2019.

That process could take months, Jaret Seiberg, an analyst with Cowen Washington Research Group, said in a note to clients Wednesday.

“We see this as political posturing and believe all five will get confirmed, though the fight could extend into the spring,” Seiberg said.

Under current Senate rules, Brown could move Raskin’s nomination to the floor once the other nominations are cleared but would need 60 votes in the chamber to do so, since that maneuver would be subject to the Senate filibuster. But given that Senate Minority Leader Mitch McConnell on Tuesday criticized President Biden’s nomination of Raskin, Democratic leadership is unlikely to secure enough support from Republicans to do so.

Analysts say that one of the only moves left for Senate Democrats would be to use a simple majority vote to change the chamber’s rules around nominees, allowing Brown to discharge Raskin from the committee without the Senate Banking Committee’s approval. Such a procedure would be similar to the rules already in place in the event of a tie vote for nominees before any Senate committees.

In order to get the 51 votes needed for the rule change, some moderate Democratic senators, like Joe Manchin of West Virginia and Kyrsten Sinema of Arizona, who have resisted similar proposals to sidestep filibuster rules for legislation, would have to support the idea.

The blowup at the Senate Banking Committee was not entirely a surprise.

Democratic leadership has been wary of Republicans using quorum rules at the committee level to block Biden’s nominees heading into the midterm elections this year, according to a Democratic strategist, who asked not to be named.

“It’s a concern, and it has been for a while,” the strategist said.

It’s unlikely that Senate leadership would seek the procedural rule changes over Raskin’s nomination, but the pressure could mount as a fight potentially looms over Biden’s upcoming Supreme Court pick, analysts and strategists said.

Brendan Pedersen contributed to this article.