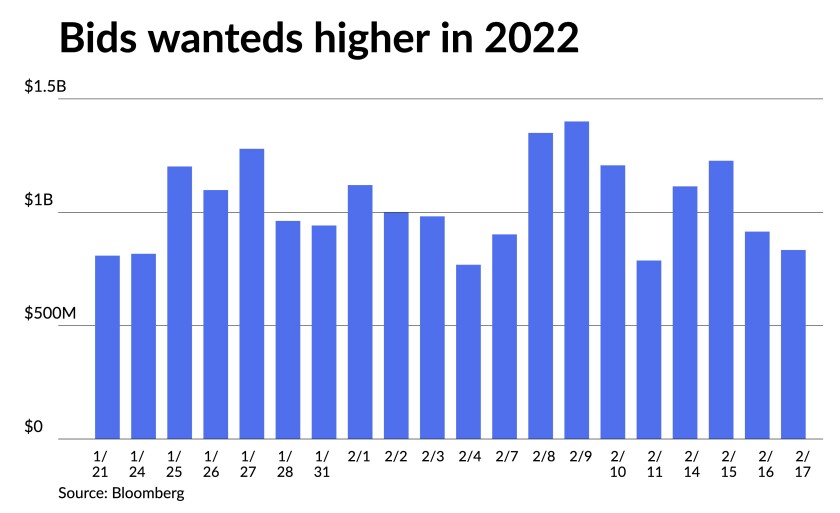 Triple-A benchmark yields fell further Friday, as U.S. Treasuries were better in a continued flight-to-safety bid, while equities ended in the red again.

Traders and managers reported a firm tone and trading showed it on Friday ahead of next week’s lower new-issue calendar.

“It’s pretty quiet,” a New York trader said on Friday afternoon, pointing to the anticipation of $4.98 billion in municipal volume next week, which he said is considerably low compared to recent months.

“It seems like the market is pretty firm, but we don’t have a real big calendar next week,” he said. “People are trying to position bonds if they can.”

The one saving grace this year is that supply has been relatively modest; otherwise, tax-exempts would have underperformed much worse, according to a Barclays PLC report.

The new-issue calendar for the holiday-shortened week is $4.98 billion, with $3.633 billion of negotiated deals and $1.347 billion of competitive loans.

The largest deal of the week comes from the Virginia Small Business Financing Authority with $1.109 billion. Other notable deals include $412 million from the Nature Conservancy, Virginia, $236.975 million of taxable general obligation refunding bonds from Wisconsin, and $367.07 million from the District of Columbia Water and Sewer Authority.

Howard Mackey, managing director at NW Financial, Hoboken, N.J., noted that the market was continuing its firmness on the heels of Thursday’s improvement in yields.

“We had an up day because [Refinitiv] MMD yesterday improved, after several previous corrections,” he said. .

There are also concerns about potential spread widening, according to Mackey.
“Spreads seem to have caught up with the market, but if there is more downdraft from [benchmark yields] and if the adjustments are not enough, spreads will increase across the market,” he said.

But that’s not all bad news.

“If new issues are priced to reflect the market at the time they will get done because people still have ample cash available and demand for tax-exempt paper,” he said.

Spring redemption season will arrive as investors still have a lot of existing cash available — and even more cash coming in from coupon and maturity payments — but the strength of rollovers will depend on the prognosis of Fed action in the following month, according to Mackey.

“Typically, that puts more cash into the system, which will increase demand, but it depends on the tone of the market at the time,” Mackey said.

“If sentiment reflects tightening, the investment market will require spread and price adjustment to reflect a weaker market,even if they have cash on hand,” he said.

“We have seen some of that happen recently,” he said, adding “people are concerned if they buy bonds now and they will be available at 10 to 15 basis points cheaper in two weeks, they are not going to just buy bonds to put cash to work.”

Regardless of what rates do, Barclays said tax-exempts have underperformed Treasuries, demonstrating the muni market’s weakness.

Another source of pressure points for investors is low-coupon debt. Nearly 70% of the 2% debt — totaling over $30 billion and largely issued in the last one to two years — has fallen below the de minimis threshold. This is a significant reversal from last summer, when few municipal bonds traded below these levels, according to Barclays strategists.

“At this point, very few, if any, 3% bonds are trading below de minimis, but many are trading close enough, which should also put pressure on prices,” they said. “As more and more low-coupon debt comes under pressure, and there is nearly $500 billion outstanding, there might be some forced liquidations by investors; that is the main risk we see for munis near-term.”

Taxable municipals are performing quite well in contrast, outperforming corporates this year and trading at the highest level relative to the corporate index since the COVID crisis, they said.

On the one hand, taxables have once again demonstrated their defensive tendencies, which all crossover investors should be aware of. On the other hand, they are rather rich, and their upward potential is currently clearly constrained, Barclays said.

Unless the corporate market improves and the spread differential between these two market groups narrows, Barclays said investors should be cautious and maybe wait for a better entry moment.

Federal Reserve Bank of Chicago President Charles Evans said, “the current stance of monetary policy is wrong-footed and needs substantial adjustment.” Inflationary pressures, while mostly resulting from supply-side issues related to the pandemic, he said, “clearly have widened in the broader economy to a degree that requires a substantial repositioning of monetary policy.”

Meanwhile, Federal Reserve Bank of New York President John Williams said inflation above 2% means “it is time to start the process of steadily moving the target range back to more normal levels.” He expects a March rate hike.

After March, however, things are less clear. Peter Berezin, chief global strategist at BCA Research, expects the Fed to raise rates to a neutral level, which the Fed sees as 2%, by early 2023. Inflation waning will allow the Fed to hold rates next year, they said.

“Unfortunately, the respite from rate hikes will not last,” he added. “The neutral rate of interest is around 3%-to-4%, significantly higher than what either the Fed or investors believe.”

Late next year, the “wage-price spiral will intensify,” Berezin said, “setting the stage for the second and more painful round of tightening.”

Indeed, January economic data “keeps the pressure on the Fed to hike the fed funds rate at a quicker pace than they assumed at the December FOMC meeting,” said Scott Anderson, chief economist at Bank of the West.

The Fed will raise rates five times this year, a quarter point each time, he said.

“Kicking off the tightening cycle with a 50 bp rate hike would certainly send a strong and decisive message about the Fed’s intent to bring inflation down,” they said, “yet we ultimately think that policymakers can ultimately achieve the same effect by guiding for more rate hikes across the cycle. Therefore we look for some significant changes coming in the March SEP.”

Of course, in his monetary policy report to Congress, Fed Chair Jerome Powell can “align expectations for the upcoming March meeting, and whether or not he chooses to leave open the option to surprise with a 50 bp hike.”

In data released Friday, the January Leading Economic Index declined 0.3% after a 0.7% gain in December, while the coincident index rose 0.5% and the lagging index gained 0.7%.

“Most of the softness can be chalked up to jobless claims experiencing their first monthly increase in a year,” noted Wells Fargo Securities Senior Economist Tim Quinlan and Economic Analyst Sara Cotsakis, “but we do not see this print as a significant warning sign in the labor force, as the level of claims remains historically low.”

“Despite this month’s decline and a deceleration in the LEI’s six-month growth rate, widespread strengths among the leading indicators still point to continued, albeit slower, economic growth into the spring,” said Ataman Ozyildirim, senior director of economic research at The Conference Board. “However, labor shortages, inflation, and the potential of new COVID-19 variants pose risks to growth in the near term.”