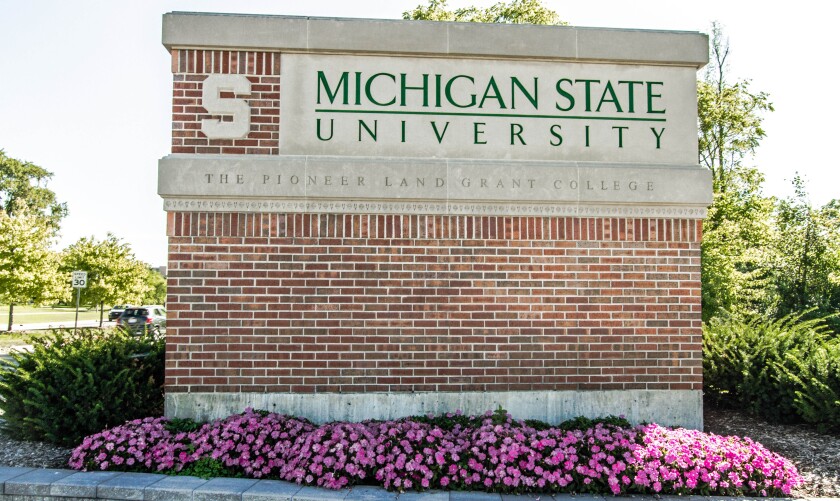 Michigan State University got a rating outlook boost as it heads into the market with a $500 million century bond.

S&P Global Ratings revised the outlook on its AA rating to stable from negative ahead of the deal, citing the university’s management through the operational turbulence caused by the Larry Nassar sexual abuse scandal.

The East Lansing-based school unveiled its plan to join the small club of century bond issuers in the not-for-profit higher education sphere in December. The taxable bond proceeds will finance initiatives related to the university’s long-term strategic plan, including infrastructure and technology investments and research programs.

“Borrowing allows the ability to support strategic objectives as outlined in the Empowering Excellence, Advancing Equity and Expanding Impact [MSU’s 2030] Strategic Plan,” Lisa Frace, MSU’s chief financial officer and treasurer, said in an email Thursday. “It also allows us to address both near- and long-term capital needs, as well as providing a stewardship tool to invest in innovative and transformative projects now and for future Spartan generations.”

The pricing is expected in the final week of February or early next month but “rate pricing is important and may influence the timing of the bond issuance,” Frace said.

The bonds pay interest through 2123 when the principal is due in a bullet payment.

The debt is being sold under a new trust agreement designed to provide future flexibility by allowing for the removal of all non-tuition, fees, and student charges from the general revenues pledge without bondholder or trustee consent if, after the removal, general revenues in the most recent fiscal year are not less than 150% of maximum annual service. The new trust also removes the rate covenant for bonds.

“This additional flexibility and removal of the rate covenant will not occur until all of the university’s outstanding parity bonds are either retired, redeemed, or defeased, or the terms of the prior agreements are amended,” Moody’s Investors Service said. “Under the most narrow revenue pledge of
just tuition and fees, the university would still have over $1 billion of pledged revenue available for debt service.”

Moody’s affirmed Michigan State’s A2 rating and stable outlook. The borrowing will bring the school’s debt load to $2.18 billion.

“The outlook revision reflects our view that, although there are still some changes occurring at the senior leadership level, MSU’s management has managed recent transitions well, especially in light of the pandemic,” said S&P analyst Jessica Wood.

“While additional impacts are possible from the fallout of the Nassar scandal and associated lawsuits, the demonstrated stability in the senior leadership team and board, as well as maintenance of enrollment and demand and financial metrics, supports the stable outlook at the current rating,” Wood said.

Nassar, a team doctor for the university, sexually abused student-athlete gymnasts. Officials at the university and USA Gymnastics, which also employed Nassar, came under fire for letting it happen over many years. University President Lou Anna Simon resigned over the scandal and initially faced criminal charges, although a judge later tossed them.

Others also stepped down amid ongoing investigations of the school’s handling of situation. Former Gov. John Engler was named interim president but later forced out over controversial remarks made about Nassar’s victims. Samuel L. Stanley Jr. has led the university since July 2019.

The school in 2019 borrowed to help cover a $500 million legal settlement that resolved many cases. The U.S. Education Department also ordered changes at the school and imposed a $4.5 million penalty. The university sold $323 million of taxable bonds.

The university exhausted a $75 million settlement reserve fund in fiscal 2020 that was dedicated to additional Nassar-related claims. The university, which refers to Nassar only as a former physician in the offering statement documents and not by name, said it can’t predict the size of future claims.

The university doesn’t expect a material impact of any future claims but an unexpected large wave of additional claims against the university could lead to credit pressure, Moody’s said.

MSU would become the first Michigan-based university to use the 100-year repayment structure. Century bonds saw an uptick in 2019, but that tapered off with the onset of the COVID-19 pandemic as schools focused on managing the costs and the shift to remote learning.

Such long-dated structures are typically limited to either highly rated universities or ones with a long history and expectation they will remain intact for a long time to come. The low interest rate environment and a healthy taxable market drew universities to the structure before the pandemic.

“We saw a lot of century bonds in 2019. We have not seen much in 2020 and 2021,” Wood said in an interview after MSU announced its plans. Market participants said expected federal fund rate hikes this year could prompt more to jump into the market to beat the Fed.

In a 2019 report, Moody’s noted the University of Virginia and State University of New Jersey (Rutgers) both “received an attractive long-term cost of capital with flexible use of proceeds” and the move was a credit positive because the funds helped with capital planning and investment over long-term horizons.