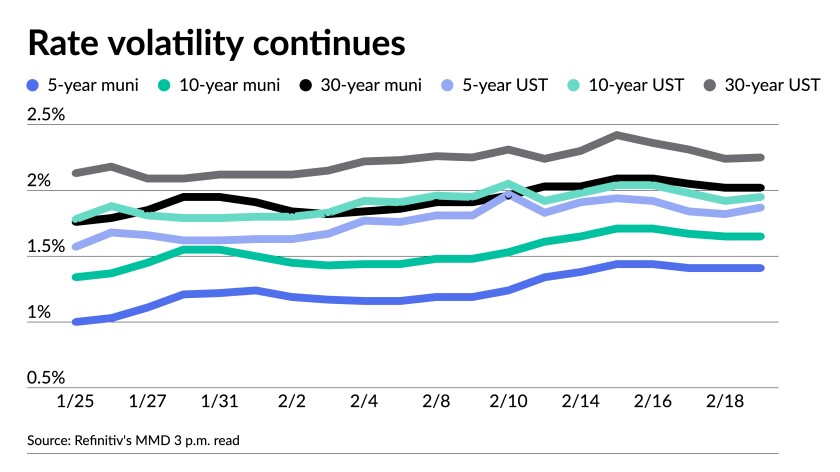 Municipals were mixed on Tuesday with U.S. Treasuries providing little guidance while equities sold off on increasing concerns over Ukraine and Russia.

Municipal triple-A yields were unchanged on Refinitiv MMD and Bloomberg BVAL scales while experiencing up to three basis point bumps on the long end of ICE Data Services’ curve and two basis point bumps along IHS Markit’s. Secondary trading was light and prints were mixed.

Between the long holiday weekend and investors trying to absorb the Russia-Ukraine developments, it was a slow start to the week in the municipal market.

“I think people are trying to get their heads around what’s going on overseas, with the concern that we might see some widening of credit spreads,” the trader said. “You would normally see a risk-off trade from people selling their riskier assets and buying higher-quality assets, like municipals.” .

The rest of the week’s primary begins pricing Wednesday, with a mix of credits. The New York Metropolitan Transportation appeared on the competitive calendar with two deals, $175.09 million at 10:45 a.m. and $207.85 million at 11:15 a.m. Wednesday.

Muni to Treasury ratios are marginally cheaper as a result of the underperformance. Credit and structure-related spreads are greater in some areas, particularly for sub-5% coupons, he said.

Block anticipates munis to continue to underperform for a few more weeks, especially if new-issue supply rises to $10 billion to $12 billion per week as investors reassess their muni holdings.

“Fortunately, many issuers are cautious on the market at this time, given the unsettled macro backdrop. Many deals are on week-to-week status given sensitive refunding savings targets,” he said.

For the time being, municipal bonds are attempting, if unsuccessfully, to recoup from historic losses in January, said Jeffrey Lipton, head of municipal credit and market strategy and municipal capital markets at Oppenheimer & Co LLC.

“As we consider municipal bond performance, there is certainly plenty of red, although the losses being posted for UST securities are almost double the negative returns currently being earned month-to-date by munis,” he said.

While February appears to be less painful for munis than January, the near-term picture will be influenced by market sentiment and, if they materialize, reducing anxieties about Central Bank policies, Lipton said.

In contrast to 2021, he said outsized withdrawals from mutual funds are at levels not seen since March 2020.

He does expect episodic outflows to continue until more clarity and stability return to the markets, which may take some time, but he also doesn’t anticipate a long period of persistent withdrawals.

Muni participation has been shaky among both retail and institutional buyers, as well as primary market interest, with many new deals categorized as day-to-day. And with higher rates — up around 60 basis points on the 10-year and 50 on the 30-year since the start of 2022 — retail may be slowly returning to the asset class.

“At these higher entry points, there is retail emergence, but again with a very selective bias with respect to structure and we would argue for a cautious and thoughtful deployment of cash,” he said.

Given the number of unknowns, the institutional business has likewise been quiet. Aside from the rising interest rates, he said the growing geopolitical risk has given corporate buyers pause. Security selection and suitable valuations have become critical components of the investing arithmetic, especially as the more desired ratio values have returned to historical norms, presenting investment opportunities at specific rating levels.

As interest rates rise, higher-quality and premium bonds might offer investors with a protective tilt. Although the bond market sell-off appears to be slowing, he believes there is still room for munis to outperform USTs and corporate bonds, Lipton said.

“For now, we remain committed to our initial call of modestly positive performance for munis by year-end, yet we are mindful that out-sized disruptions in the Treasury market could upend our outlook and catalyze more systemic outflows,” he said. “At the heart of the resiliency backdrop is a favorable credit profile for munis that is likely to improve further as well as what we expect to be a constructive technical environment.”

Treasuries were mixed while equities sold off.

The consumer confidence index slipped to 110.5 in February from 111.1 in January, which was better than the 109.8 expected by economists polled by IFR Markets.

With expectations off, first half growth will likely moderate, said Lynn Franco, senior director of economic indicators at The Conference Board. “Concerns about inflation rose again in February, after posting back-to-back declines. Despite this reversal, consumers remain relatively confident about short-term growth prospects. While they do not expect the economy to pick up steam in the near future, they also do not foresee conditions worsening. Nevertheless, confidence and consumer spending will continue to face headwinds from rising prices in the coming months.”

Indeed, fewer consumers said they’d buy a home, car, major appliance or take a vacation in the next half year.

Respondents now expect inflation at 7.0% a year from now, up from 6.8% last month.

“Consumer confidence is weakening but the growth story for the year still remains intact,” said Edward Moya, senior market analyst at OANDA. “The headwinds are visible to everyone but the weakness is modest at best. The economy and the consumer are still on solid footing and that should support a strong economic recovery once inflationary pressures that are stemming from geopolitical tensions abroad subside.”

While consumer confidence is usually high in tight labor markets, Wells Fargo Securities Senior Economist Tim Quinlan and Economic Analyst Sara Cotsakis said, “the highest inflation in 40 years may be too much of a problem to overlook.”

With the latest retail sales figures posting the largest rise “since the stimulus-fueled surge in March of last year,” they said, it suggests “a contradiction: consumers say they feel lousy, but they do not act like it.”

Separately, the Federal Reserve Bank of Philadelphia’s nonmanufacturing survey improved in February, with the employment index also gaining, but the price indexes hit record highs, suggesting “widespread increases in prices for inputs and the firms’ own goods and services.”

The Federal Reserve Bank of Richmond said manufacturing activity in the district “softened in February,” on drops in shipping and new orders, which both had negative index readings this month.

Employment rose and prices moderated, but remained elevated. “Firms continued to report increasing wages while also citing challenges finding workers with the necessary skills,” the report said. “Firms expect this challenge to last for at least the next six months as the expectations index remained in negative territory.”

The Richmond Fed said the service sector improved in the month, with little change in hiring while prices continued to climb.

Christine Albano contributed to this report.