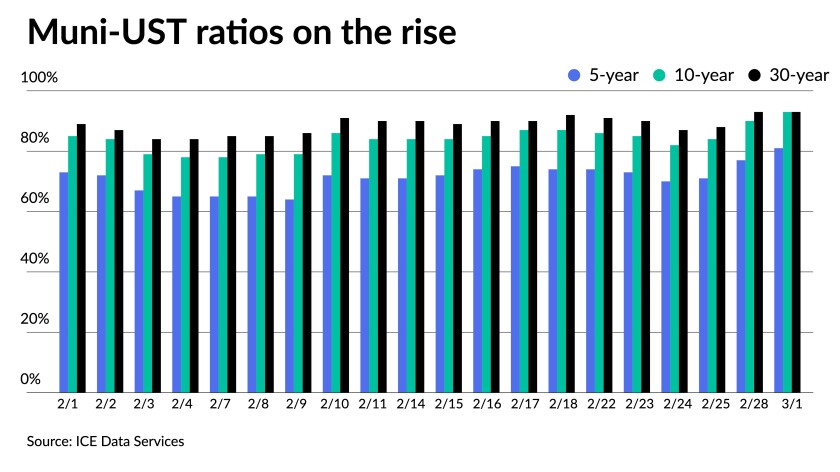 Municipals improved on Tuesday as the U.S. Treasury flight-to-safety bid continued and equities sold off on the escalating turmoil in the Ukraine.

The primary was active Tuesday with the New York City Municipal Water Finance Authority seeing bumps on the short end for an institutional pricing with cuts on bonds in 2039 from Monday’s retail offering.

Municipals should underperform Treasuries in March — and possibly April — as a result of high net supply and continued fund outflows, according to Peter Block, managing director of credit strategy at Ramirez & Co.

“Assuming the market settles down and new issue supply materializes as we expect at $70 billion over the next two months, reinvestment is fairly light at $56 billion, resulting in $14 billion positive net supply,” Block said in a weekly report Monday.

“Still, the flight-to-safety rally in municipals was a relief to sector participants who have been wrestling with January’s only half-completed municipal price correction,” Fabian said.

While shorter-maturity high grades weakened as accounts sought liquidity at the front of the curve, he said, selling did not extend to lower-rated high-yield paper, and high grades had not yet recovered to lower yields.

Furthermore, Fabian said mutual fund outflows have persisted, approaching $12 billion so far this year, depriving market makers of their go-to source for leading-edge demand and price discovery for the past five years.

All of this made credit and term spreads too tight to trade comfortably, further reducing dealer interest in risk-taking — inventories have fallen to levels last seen in the fourth quarter of 2021, he said.

“This is why a sustained push richer in muni triple-As would help liquify lower-rated paper and help unlock secondary liquidity,” he said. “Lower new-issue supply has also been a hindrance to liquidity by removing primary market price discovery, clouding the worth of evaluations and other marks.”

This is unlikely to change in the foreseeable future, especially if the economic disruption caused by the invasion forces issuers to reduce and/or postpone new-money borrowings, he said.

Overall, fund outflows remain an issue due to year-to-date negative returns, fear of higher rates, and likely further reinforced by tax season redemptions and sales driven by 2021 strong equity returns, according to Block.

Municipals see continued low risk for defaults and offer a window of opportunity for value, according to Jennifer Johnston, director of research for Franklin Templeton Fixed Income municipal bond team.

“If investors have been on the sidelines, this is a great time to get involved,” she said, noting that municipal credit is stable despite some fears over inflation and market volatility over the last month driven by rate concerns and potential Federal Reserve action.

“There is opportunity to find value across the credit spectrum,” especially among sectors that have responded differently to the volatility surrounding inflation, the roll off of federal aid, as well as labor market challenges when it comes to finding and maintaining workers and dealing with any ongoing COVID mandates.

From a credit standpoint, some municipalities are also facing operating pressures, credits pressures, and headline risk, according to Johnston.

Johnston said there could be potential value in credits that have not recovered at the speed of others and are priced incorrectly because of weakness due to the removal of federal aid after the pandemic.

“We like to capitalize on credits we believe can fundamentally recover well,” and offer a pricing differential, she said.

On the other hand, stronger credits exist in the market today that have gained structural balance on their own due to being weaned off federal aid in the post-COVID world.

Treasuries rallied while equities ended the day in the red.

Economy
The Russian invasion of Ukraine could slow interest rate hikes and has led the market to pull back on the chances of a 50-basis-point liftoff.

“The Russian invasion of Ukraine caused a rush to safer assets and a drop in Treasury yields,” said Bill Merz, head of fixed income at U.S. Bank Wealth Management. “Interest rate hike expectations fell slightly, but the market still anticipates more than five increases from the Fed this year.”

Peter Berezin, chief global strategist at BCA, agreed. “Central banks will temper their plans to raise rates in the near term,” he said. “Investors and speculators are net short duration at the moment, which could amplify any downward move in bond yields.”

But longer term, the Russian incursion “will lead to both higher inflation and interest rates,” Berezin said. “Larger budget deficits will sap global savings. The retreat from globalization will also put upward pressure on wages and prices.”

While oil prices have spiked, they will come down eventually, he said, as long as any Russian energy export reduction is short-term. Global economies should also fare well this year as the pandemic issues wane “and fiscal policy turns more expansionary,” Berezin said.

“Apart from the horrific human tragedy of the Russian invasion of Ukraine and the disruption to world order, the likely impact on the U.S. economy and financial markets will be minimal,” he said.

Any increase in oil prices won’t be “material,” Skancke said, leading to a headline inflation gain of 0.2%, while cutting GDP 0.1 point.

“Consumer and business balance sheets are in good shape, with consumer spending and business investment expected to boost economic growth into the range of 4% in 2022,” he noted.

While the impacts of the invasion “will negatively drag on the markets as long as the conflict lasts and until a sense of normalcy returns,” said Matt Regan, president of Wealthcare, “there is an argument to be made that the market may have been looking for an excuse to sell off after a 12-year bull run that pushed valuations towards nosebleed levels.”

“One thing that we know is that the market hates uncertainty,” he continued. “Geopolitical turmoil is high on the list of items that provide that uncertainty, particularly in our globally connected world.”

But the sanctions imposed on Russia concern Wells Fargo Securities Chief Economist Jay Bryson and Economic Analyst Nicole Cervi. “Even if a full-blown financial crisis does not ensue,” they said, “the sanctions could lead to significant economic and financial weakness in Russia. Consequently, countries with meaningful amounts of economic and/or financial exposure to Russia could experience some negative repercussions as well.”

Expect this situation to linger. Tom Siomades, CIO of AE Wealth Management, said, “This mess is far from over and the repercussions will continue to hamper us going forward, so geopolitical risk is squarely on the table as a major potential market disruptor.”

The price dip in ISM “may prove to be short-lived with commodity prices — especially oil — surging after Russia invaded Ukraine,” said Scott Anderson, chief economist at Bank of the West. “Finally, manufacturing employment gains may be cooling down. The employment index dropped to its lowest level since October, pointing to a below consensus gain in manufacturing payrolls when the BLS employment report is released on Friday.”

Construction spending soared 1.3% in January following a revised 0.8% gain in December, first reported as a 0.2% increase.

“The construction sector will continue to face higher prices and worker shortages as more projects come on line. Russia’s invasion of Ukraine and the subsequent sanctions will drive up energy prices and add to supply chain bottlenecks and shipping times,” said Grant Thornton Economist Yelena Maleyev. “We still expect the Federal Reserve to begin raising interest rates at its March meeting, as it is now chasing inflationary pressures.”

The Virginia Transportation Board (Aa1/AA+/AA+/) is set to sell $263.985 million of transportation capital projects revenue and refunding bonds, Series 2022, at 10:30 a.m. Wednesday.

Thailand’s Crypto Utopia — ‘90% of a cult, without all the weird stuff’
Top Stock Picks for Week of August 9, 2021
How They Closed It: Selling The Rich History Of A Landmark Australia Estate
Stocks making the biggest moves premarket: Walgreens, Constellation Brands, RH and others
Here’s what China’s real estate debt crisis could mean for Asia junk bond investors