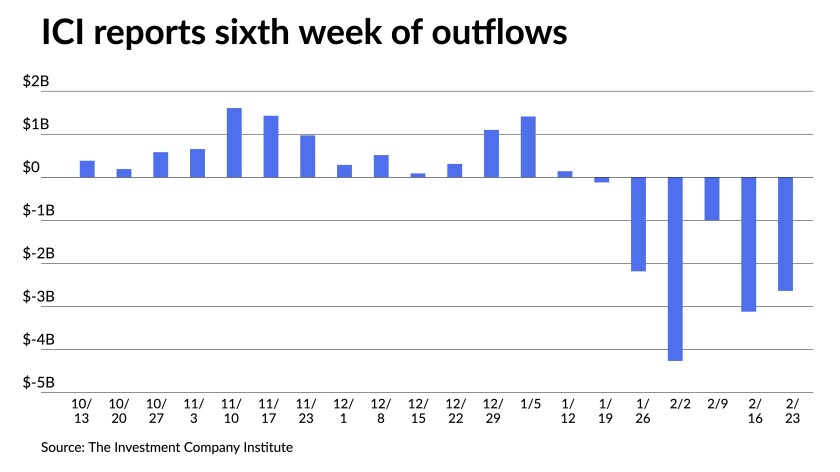 A 25-basis-point rate hike should be appropriate later this month, the first in a “series” of increases, Powell told the House Financial Services Committee Wednesday, but the Fed is prepared to raise rates by a larger amount in coming meetings if inflation doesn’t moderate later this year.

“To the extent that inflation comes in higher or is more persistently high than that, then we would be prepared to move more aggressively by raising the federal funds rate by more than 25 basis points at a meeting or meetings,” Powell said at the hearing.

Thursday may be a better indicator of how munis will react, as the asset class was slow to show weaker trades until later in the day Wednesday and may play catch up. Refinitiv Lipper fund flows will also be telling as to how much the improvements of Monday and Tuesday have had on retail sentiment.

Exchange-traded funds saw inflows at $556 million versus $627 million of inflows the week prior.

“Municipal funds are sitting on lofty cash balances, while their AUMs have dramatically increased over the past decade — meaning that massive muni fund outflows would be needed to move the needle,” Barclays said in a monthly strategy report.

Poor secondary liquidity due to much lower dealer appetite for risk and the abundance of low-coupon debt trading close to de minimis or even below it, thus causing profit and loss pain and extending portfolio duration, are also a concern, according to strategists Mikhail Foux, Clare Pickering and Mayur Patel.

Going into March’s FOMC, there might be more rate volatility, they said, adding that credit spreads have not widened enough, and they prefer the “up-in-quality approach,” although at cheaper levels they “would consider some low single-As, BBBs and possibly high-yield bonds.”

Tax-exempts continue to underperform and the market “remains vulnerable, as fund outflows and rate volatility have not been conducive for risk-taking,” they said. “If supply picks up, munis may underperform even more.”

They also note that more and more low-coupon debt is coming under pressure and there might be some forced liquidations by investors, the main risk they see for munis near term.

“Taxable municipals are doing well by comparison, but have become quite rich versus corporates and their upside is clearly capped at the moment,” the report said.

Treasuries sold off while equities ended the day in the black.

“Making appropriate monetary policy in this environment requires a recognition that the economy evolves in unexpected ways,” he said. “We will need to be nimble in responding to incoming data and the evolving outlook.”

When asked if the Fed made a policy mistake by not raising rates earlier, Powell said the Fed pivoted quickly once it was clear inflationary pressures were not as transitory as expected.

“The Fed has room to move on inflation and the market shouldn’t see it as taking away the punch bowl,” said Eric Merlis, managing director of corporate risk solutions at Citizens Bank.

The Russian invasion of Ukraine “has deflated expectations for the Fed to be super aggressive in its rate hikes,” said Scheherazade Rehman, professor of international finance at George Washington University. “At least for now it is proceeding carefully.”

But the situation will not stop the Fed from removing accommodation at its upcoming meeting, said Chris Low, chief economist at FHN Financial. “The conflict in Ukraine is another reason to be nimble in tightening, but not a reason to avoid it,” he said.

“Frankly, given the inflation shock from the loss of Russian commodities in the world market, the war is further reason to tighten, though Powell does not say that,” Low continued.

The crisis in Ukraine is worse than markets expected, said R.J. Gallo, senior portfolio manager and head of municipal bond investment group at Federated Hermes. This could “complicate” the Fed’s plans. A 50-basis-point liftoff has been ruled out, Gallo said, and the terminal rate “is potentially lower too.”

Rates shouldn’t go much higher short-term, he said, “but longer term, the moderation of global activity related to the effects of the invasion will only take some of the steam out of the inflation kitchen for the Fed.”

“While it could be argued that this is only a shock to headline inflation and not the core CPI, the backdrop is that U.S. core CPI inflation is running at three times the Fed’s target,” he said. “Headline inflation shocks matter if they keep on coming.”

If inflation remains elevated this year and medium-term inflation expectations grow, Fitch said, the Fed may have to raise rates as high as 3% before yearend.

“A more abrupt adjustment path could take a big toll on GDP including through tighter credit conditions and a sharp rise in long-term U.S. bond yields,” Fitch said. Economic growth may be below 0.5% next year in that case, although Fitch’s base case is 1.9% growth.

Look for the Fed to note “rising risks on both sides of the outlook,” said Rhea Thomas, senior economist at Wilmington Trust. “The bias is to continue hiking in 2022 in light of the inflation outlook but they will be sensitive for any signs of consumer weakness.”

The report “shows broad based job growth for February which is a positive indicator,” said Steve Skancke, chief economic advisor at Keel Point. “It is a big turnaround from a huge miss in January so it’s hard to know how much is correcting for January and how much is showing strong employment growth in February.”

Despite Powell’s statement regarding a 25-basis-point rate hike at the March 15-16 meeting, Friday’s employment report will be watched by the markets.

Skancke expects about 600,000 jobs added. “Part of this is the post Omicron-COVID rebound and part is the employer survey catching up to the household survey, which has been more positive over the past several months.”

“The key is labor market participation and whether it continues to expand,” said Wilmington’s Thomas. “We expect it will have picked up in February after being held down by Omicron in January.”

“High frequency data on job openings suggest employers may be cooling their appetite to hire as they deal with rising labor costs and are figuring out how to manage with current levels of employees,” Thomas said.

What is a ‘rolling recession’ and how does it affect consumers? Economic experts explain
Secure Gun Storage Is A Wellness Design And Real Estate Benefit
Gilead’s Stock is on Sale: Should You Buy?
Bitcoin Difficulty Set to Rise 3.82% to All-Time High of 39 Trillion Following Recent Increase
Mega-mergers stand out amid a 2022 dip in hospital consolidation