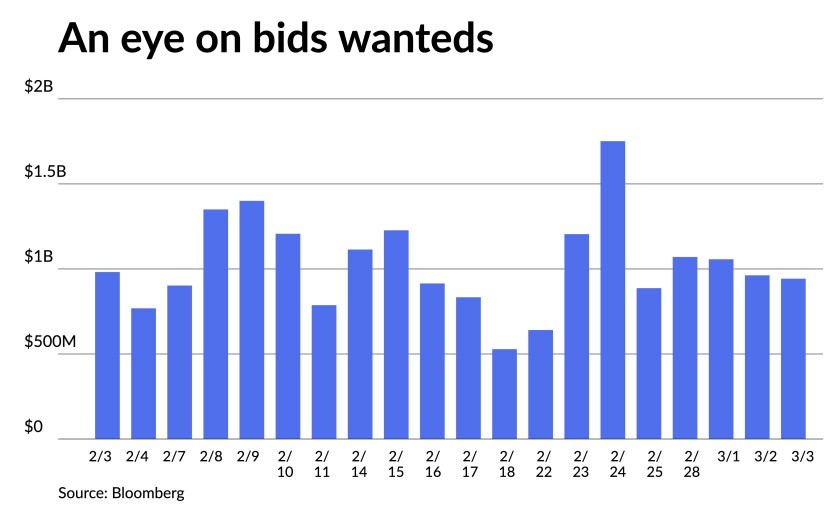 Municipals ended the week mixed, while the swings in U.S. Treasuries continued and equities sold off as Russia’s invasion of Ukraine escalates.

Triple-A yield curves saw one to four basis point cuts while UST yields fell up to 12 basis points on the 10-year, with ratios inching closer to 100% as a result.

Bond markets are caught between a rock and a hard place, according to Barclays PLC in a weekly report. Investors are focused on the Russia-Ukraine conflict, which is frequently resulting in a flight-to-quality, but they are also monitoring inflation and the Federal Reserve’s rate hike schedule, which is pushing yields higher, said Barclays strategists Mikhail Foux, Clare Pickering and Mayur Patel. Market volatility has risen significantly, particularly in the last several weeks, with daily Treasury yield swings of 10 basis points or more becoming the norm.

“This year, investors are faced with some of the hardest market conditions in recent history, as muni-Treasury ratios keep oscillating, and rate volatility is never conducive to risk-taking,” they said. “We think that the belly of the curve has adjusted enough that it is starting to get interesting versus Treasuries.”

Mutual fund outflows continue with about $8.6 billion so far in 2022, per Refinitiv Lipper data, and bids wanted lists have surpassed $1 billion 16 times. Those two factors have been a leading challenge to the market as well.

Supply has been lackluster so far this year as a result of the volatility but issuers are ramping up with next week’s potential volume hitting $10.406 billion, $8.919 billion of which are negotiated deals and $1.477 billion of competitive loans. Thirty-day visible supply now sits at $16.27 billion, per Bond Buyer data while net negative supply is at $3.461 billion, per Bloomberg data.

This influx of new-issues may add pressure to municipal yields.

The largest deal of the week comes from California with $2.2 billion of general obligation bonds, its first large issuance of the year. Other notable deals include two deals — $1.5 billion of bonds and $583 million of taxable revenue bonds — from the Regents of the University of Michigan, $845 million of future tax-secured subordinate bonds from the New York City Transitional Finance Authority and $560 million of taxable bonds from the University of Massachusetts Building Authority.

The Board of Trustees of the University of Alabama System and a New York City Transitional Finance Authority taxable deal lead the competitive calendar with deals over $100 million.

Investors should be more selective in their approach amid this volatile time, analysts say.

Barclays strategists said they believe the ideal place for investors to be is at the upper-end of the quality spectrum. Single-A and triple-B spreads have begun to widen but are still lower than they were in 2021, and the high-yield high-grade index difference is at historic lows. Barclays strategists said they would be more comfortable with lower-rated names if spreads were far wider than they are now.

Taxable muni spreads have widened in lockstep with corporate spreads, Barclays said, with the yield differential between the two indexes narrowing. Barclays remains cautious on taxable municipals, since the new-issuance pipeline may put more pressure on spreads. They prefer the belly of the curve because a flatter UST yield curve might lead longer-dated credit spreads to widen even further.

Treasuries were better while equities ended the day in the red.

Jobs
The employment report came in stronger than expected (678,000 jobs added vs. 450,000 projected by economists polled by IFR Markets), but with a 25-basis-point rate hike all but guaranteed for the March Federal Open Market Committee meeting, analysts’ focus is elsewhere.

“The labor market recovery remains very robust across the board as more Americans are returning to work,” said Eric Merlis, managing director, global markets at Citizens Bank. “Geopolitical issues and inflation pose ongoing threats to the U.S. economic recovery, but pandemic restrictions are being lifted and we continue to see strong job growth.”

The report “won’t move markets,” said Ron Temple, head of U.S. Equities at Lazard Asset Management, but it shows “an economy firing on all cylinders.”

“The U.S. economy is open for business,” said Morning Consult Chief Economist John Leer. “Omicron is in the past, and businesses expect demand to remain strong going forward.”

The summer should bring “robust jobs growth,” he said, as the pandemic eases, warm weather returns and mask mandates are lifted.

“The crisis in Ukraine overshadows the positive job numbers as we see the flight-to-safety in our Treasury market,” said John Farawell, managing director and head of municipal trading at Roosevelt & Cross. “Until we see a settling in the Ukraine the weekly economic releases should continue to take a back seat.”

“The increased availability of workers appears to be taking the edge off current wage pressures,” they said. “While we suspect wage pressures will remain fairly strong in light of the overall tight state of the labor market, the easing in February reduces concerns about wage growth running away and taking inflation with it.”

Despite the flat wages in the month, the three-month annualized pace remained “elevated in February (+4.6%) compared to the average pace of gains in the years before the pandemic (3.0% from 2017-2019),” noted Rhea Thomas, senior economist at Wilmington Trust.

The weakness in month-over-month wage growth may be overstated, said Marvin Loh, senior macro strategist at State Street Global Markets. “We suspect that there was some Omicron impact at work in this figure, as hours worked increased, reversing prior month weakness. This does not explain all of wage weakness however, and we may be getting towards equilibrium, with worker shortages becoming less acute, thereby relieving wage pressures. Nonetheless, if wage gains moderate, it will lessen concerns over upwardly spiraling wages.”

But, the report will not change the Fed’s plans to raise rates 25 basis points at its upcoming meeting, he said. “The strong report will give the Fed comfort that the employment landscape is adequately healed to start the tightening process.”

However, if wage gains remain moderate, the Fed may be “less active than expected in the second half of the year,” Loh said. “But with other inflation pressures building in food, energy and shelter, the uncertainty over the correct path for policy in late 2022 and 2023 remains high.”

The report reflects “past conditions,” noted Noah Williams, Manhattan Institute Adjunct Fellow. “That is no less the case now, with the turmoil from Russia’s invasion of Ukraine roiling world markets, with the impact of the invasion and the global sanctions in response still mostly yet to be felt. These shocks will continue to strain supply chains and increase price pressures.”

This report suggests the U.S. economy was strong entering “this period of increased uncertainty,” and even if economic growth cools in the near future, he said, “the robust recovery is likely to continue.”

Noting that Federal Reserve Board Chairman Jerome Powell termed the labor market “overheated” in testimony, Grant Thornton Chief Economist Diane Swonk said, “That begs the question of whether rate hikes that slow the pace of hiring will be enough to derail inflation; the Fed may also have to allow unemployment to rise to boost the supply of workers.”

The numbers suggest “there won’t be many FOMC members left who think the maximum employment threshold for raising interest rates has not yet been reached,” said Brian Coulton, Fitch Ratings chief economist. “But from an inflation perspective there might be some reassurance drawn from this report by the slowdown in month-on-month wage growth, which came as the labor force participation rate increased again and the number of people prevented from looking for work due to the pandemic fell.”

The rise in nonfarm payrolls and the 3.8% unemployment rate are “clear proof that the labor markets are at full, if not maximum, employment,” said DWS Group U.S. Economist Christian Scherrmann.

“That clearly is a very hawkish input for the upcoming March meeting,” he said. “But central bankers might draw some comfort from overall stagnating monthly gains in wages, which might ease a little their fears on a potential wage/price spiral.”

But any comfort is “limited” by inflation, which could “approach 8% in February.”

The employment-to-population ratio in the 25-54 age category is nearing pre-COVID levels, said Jeffrey Cleveland, chief economist at Payden & Rygel. “Good news and not a sign of stagnation.”

The weaker wage growth “could be due to compositional effects (e.g., lots of hiring in leisure & hospitality),” he said. “Given the strength in labor market wage growth will probably continue to accelerate this year.”

Still, he is concerned about “real wage growth,” which depending on the inflation measure used “is either barely positive or negative.”

Also causing worry, oil price spikes have historically “preceded recessions,” Cleveland said, although the U.S. is now one of the leading producers. Finally, he is watching the 2s10s yield curve, which “is collapsing.” Inversion of that part of the curve “led recession by 22 months in the 2000s, 13 months in the 1990s and 5 months in the COVID era.”

The Regents of the University of Michigan (Aaa/AAA//) is also set to price next week $582.74 million of taxable general revenue bonds, Series 2022C. Goldman Sachs.

The Dormitory Authority of the State New York (A3/BBB+//) is set to price Wednesday $148.015 million of tax-exempt The New School Revenue Bonds, Series 2022A. Goldman Sachs.

Lynne Funk contributed to this report.

Common investing mistakes – part 3
Directional Vertical Strategy with Protection from a Shorter Duration Vertical (Members Preview)
Puerto Rico’s December revenues 28% ahead of projections
Shell profits more than double to record $40bn
The Federal Reserve is likely to hike interest rates again. What that means for you