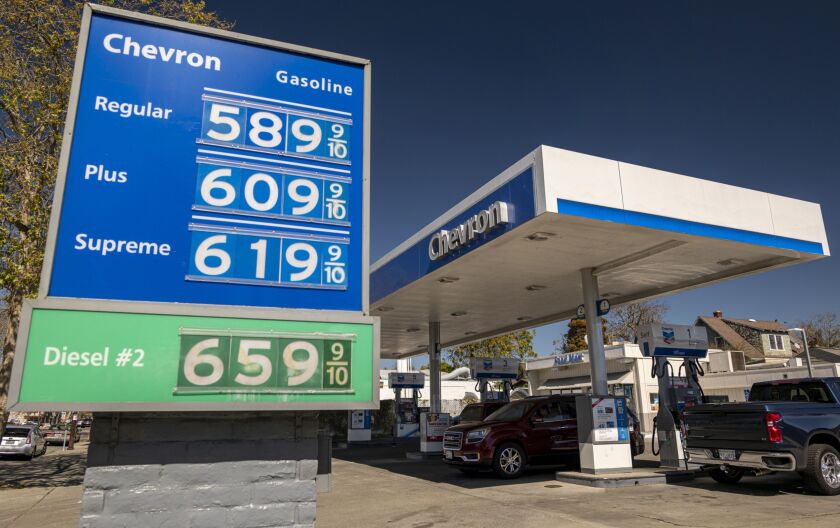 Tackling California’s housing crisis and alleviating the financial blow of rising gas prices and inflation are hot button issues as the governor’s May budget revision draws near.

Gov. Gavin Newsom promised a gas tax rebate in his State of the State speech Tuesday night and unveiled a CARE Court program last week aimed at getting mentally ill homeless people into treatment and off the streets.

“In January, we proposed a pause to the gas tax increases. Now it’s clear we have to go further,” Newsom said. “I will be submitting a proposal to put money back in California’s pockets to address rising gas prices.”

The governor said he would include the rebate in the revised budget he submits to the state Legislature in May.

Gas prices nationally jumped to $4.17 per gallon by Wednesday, up more than a dollar from 2021, according to the American Automobile Association, but the situation is more stark in California where the average price of regular was $5.78 per gallon Thursday, a nearly $2 increase from last year, according to Gas Buddy.

The same day as Newsom’s speech six Democratic governors sent a letter to Congress urging leaders to pass the Gas Prices Relief Act to suspend the 18.4-cent federal gas tax for the remainder of 2022. Newsom was not among them.

The House was expected to vote this week on bipartisan legislation banning the import of Russian oil, natural gas and coal. That could impact prices some — Russian imports account for 1% of crude oil processed in the U.S., according to the refinery lobby, but more on the West Coast — though rising world oil prices are the biggest factor. A barrel of Brent crude, $71 as recently as Dec. 20, topped $125 this week.

Whether or not Newsom can get the support he needs to include the gas tax rebate in the budget from fellow Democrats remains to be seen.

He included a gas tax vacation in his January proposed budget that would postpone a 3-cent-per-gallon increase expected in June that was opposed by leading Democrats, including Assembly Speaker Anthony Rendon, D-Lakewood. They have said the money is essential for paying for infrastructure improvements and other vital programs statewide.

“Californians are rightfully upset at the skyrocketing cost of fuel,” Senate President Toni Atkins and Rendon said in a joint statement. “Gas, food, and other prices are up, so our focus cannot be a small cut to the gas tax that might not get passed on to consumers.”

The Democrat leaders added that they would rather the tax break be borne by the general fund, in order to avoid “taking critical funds away from road repair and improvement.”

Republicans are proposing a bill that would suspend California’s entire 51-cent-per-gallon gas tax for six months.

Assembly Bill 1638 introduced in January by Assemblyman Kevin Kiley, R-Sacramento, proposes using part of the state’s estimated $46.5 billion surplus to cover the $4.4 billion in revenue that would be lost during a six-month suspension of the gas tax.

“We have a bill to suspend the gas tax, which would save 51 cents a gallon. We would love for the governor to come in on it,” Assembly Republican Leader James Gallagher, R-Yuba City, said during a press conference held after Newsom’s speech with Senate Republican Leader Scott Wilk, R-Santa Clarita.

“I love the idea of giving taxpayers back their money,” said Gallagher, one of nine Republicans in the 40-member Senate. “We would love to work with him on a tax rebate. But why not just suspend the gas tax, we have money to do that now, and then taxpayers would not have to wait for the rebate to come in the mail.”

The minority party has found some success on gas taxes previously.

The GOP was able to recall state Sen. Josh Newman, D-Fullerton, based on his support for Senate Bill 1, a 2017 gas tax to support transportation projects that ultimately passed. Newman won his seat back in the 2020 election and a statewide referendum to repeal SB 1 failed in 2018.

A similar effort by Washington state Republicans to provide a gas tax vacation through Senate Bill 5897 was rejected by majority Democrats on Tuesday.

Sen. Simon Sefzik, R-Ferndale, said the bill would save families $1 billion for the rest of the year. Democrats there say gas tax holidays benefit oil companies more than taxpayers.

California’s Republican leaders said they are also prepared to work with Newsom on his proposal for a Community Assistance, Recovery and Empowerment, or CARE, court that targets people living with untreated mental health and substance abuse problems.

“It’s the same idea as having a drug court, which I support,” Gallagher said. “I am all for a drug court that gets people treatment, rather than putting them in jail.”

The court-ordered plan would enable first responders and family members to sign off on a court-ordered care plan for treatment that would run 12-24 months. A judge would mandate that a clinical team create a plan for the mentally-ill person.

Newsom called his CARE court proposal another tool in the arsenal he has unleashed to get at what he called the “crisis of homelessness.”

He claimed there was no state strategy to tackle the housing crisis three years ago, but all that has changed.

“In just three years, we have new accountability and unprecedented investments. That is why we moved 58,000 people off the streets,” Newsom said. “We also recognize there is more work to do.”

Contrary to what Newsom said, the state has introduced and passed bond measures and had approved billions for housing at the city and state level over the past several years to try to get at the problem. Voters approved a $3 billion statewide bond measure in November 2016 for low-income housing though then-Gov. Jerry Brown did turn down a request by mayors that he declare a state of emergency on homelessness.

As of January 2020, California had an estimated 161,548 people experiencing homelessness on any given day, as reported by Continuums of Care to the U.S. Department of Housing and Urban Development. HUD only counted sheltered homeless in 2021, reporting an 8% decline in the nationwide numbers. California had 51,429 sheltered unhoused people in 2021, an increase of 3,541 homeless people living in shelters from the prior year.

In order to deal not only with homelessness but also housing affordability, Newsom has estimated the state needs to build 3.5 million new homes by 2025. Lawmakers approved $12 billion to build housing for unhoused people in last year’s budget and another $2 billion is included in the proposed budget for fiscal 2022-23.

In a report Wednesday, UCLA Anderson Forecast Director Jerry Nickelsburg wrote that though home building is expected to result in 123,000 net new unit permits in 2022 and permitted units to grow to 151,000 in 2024, the prospect for the private sector to build out of the housing affordability problem over the next three years is nil.

In his press conference unveiling his plan last week, Newsom said CARE Court was an effort “to break the pattern that leaves people without hope and cycling repeatedly through homelessness and incarceration. This is a new approach to stabilize people with the hardest-to-treat behavioral health conditions.”

The concept is intended to be early intervention, helping people with severe mental illnesses, before they are hospitalized or end up in jail. It would enable family members, first responders, intervention teams and mental health providers to refer people.

CARE court received support from a bipartisan group of eight California mayors who held a press conference Friday to endorse the proposal.

“It’s time we face the painful, but obvious truth: our behavioral health system in California is broken. All of us see it every day on our streets — and it’s long past time we fix it,” said San Diego Mayor Todd Gloria. “Governor Newsom’s CARE Court proposal is a major step forward.”

Bakersfield Mayor Karen Goh, a Republican, said “our state’s mental health crisis is not a partisan issue, and it is not a regional issue.”

“Bakersfield is dedicating much funding to emergency and police sources to deal with the mental health crisis,” Goh said. “Nevertheless, I watch in horror as mentally ill individuals dive through dumpsters for scraps in 100 degree heat behind my office. I’m disturbed by frequent reports of people running naked in front of businesses. The despair and neglect is unacceptable. There is nothing compassionate about allowing people to decompose before our eyes.

“We can all agree our mental health system is broken – and that we must find better solutions for our homeless residents,” Goh said.