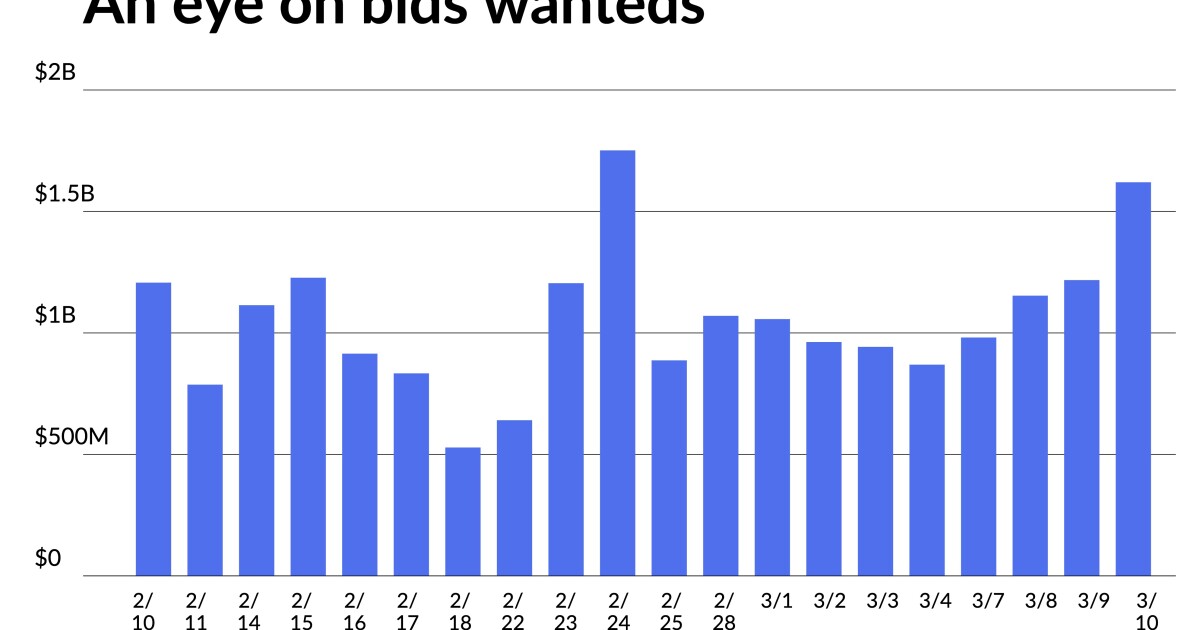 Municipal yields rose Friday to close out a rough week ahead of a smaller new-issue calendar and the Fed’s expected rate hike.

“The yield curve has been — and will continue to be — the most important indicator we watch during Fed tightening cycles and rising rate environments,” said Wells Fargo Investment Institute Investment Strategy Analyst Luis Alvarado. “Fixed income still plays a key role inside a portfolio for investors in search for yield, but also as a potential stabilizer when unexpected risks surface.”

Supply has been lackluster so far this year, and next week’s calendar is relatively light, as issuers hold back due to the Fed’s expected 25 basis point rate hike at its next FOMC meeting.

Next week’s potential volume is slated to be $5.110 billion, $4.392 billion of which are negotiated deals and $718.1 million of competitive loans.

Following Russia’s invasion of Ukraine, the flight to Treasuries came to an end this week as the 10-year Treasury yield rally came to a halt on Monday with yields subsequently rising throughout the week, said BofA Global Research strategists.

Treasury rates have increased to levels close to those seen in February’s first half. The Fed futures market now expects almost seven rate rises in 2022, they said.

“Beside the geopolitical uncertainty and the resulting impact on various entities and asset classes, the fact that the Fed ceased quantitative easing operations and is imminently preparing for a rate hike, and then quantitative tightening, appears to have led to some liquidity issues in Treasuries and elevated volatility,” they said.

The liquidity issue can also be felt in munis, as bid/ask spreads for both tax-exempt and taxable bonds widened slightly compared to last year. BofA strategists said both primary and secondary market volumes have plummeted to dangerously low levels.

Bids wanteds reached $1.62 billion on Thursday after $1.217 billion Wednesday. Bids wanteds have eclipsed $1 billion 19 times since the start of the year.

Treasury market volatility and the consequent outflows from mutual funds are mostly to blame for muni liquidity concerns. When the economy was rocked by the COVID-19 crisis in March 2020, the liquidity problem was credit-driven, but this time, the root of the liquidity problem is solely rate-related. Municipal credit quality continues to improve, according to BofA strategists.

As triple-A rates soared, mutual fund outflows became increasingly negative. While the Fed or the Treasury Department may have a role in improving Treasury liquidity, they said muni liquidity is mostly determined by mutual fund flows, high net worth investors’ participation and the dealer community’s willingness to take on greater inventories.

Barclays strategists said the most popular question that municipal investors are asking these days is when they should start actively buying, given that munis have consistently underperformed rates this year and muni-UST ratios are cheap at the moment — especially compared with the levels of late-2020 through 2021 when tax-exempts became extremely rich both outright and versus Treasuries.

They said investors may start buying even at current levels but believe that the 100% level on the 10-year and the 105%-110% level on the 30-year constitute solid buying indications, at least historically, if such levels are achieved.

They predict tax-exempt pressure to increase in the short term, as rate volatility will likely continue high, fund outflows will persist, and supply will gradually increase, as some issuers may contemplate expediting their deals owing to inflation and rate volatility.

As much bad news is being priced in at current levels, Barclays strategists said muni ratio highs for the year might be achieved in March and April, and investors should stay patient for now.

But while muni ratios are cheap, credit spreads are still very tight, albeit they have begun to expand in recent weeks.

“Taking the richness of credit spreads into account, investors should exercise the up-in-quality approach when accumulating municipal exposure, at least until credit spreads widen further,” they said. “Municipal credit is still in very good shape at the moment, and pressure is unlikely to build on the vast majority of municipal names, but to us it is a valuations, rather than a credit quality, call.”

Treasuries were weaker while equities ended in the red.

FOMC preview
Predicting the future is never easy. The Federal Reserve’s job entails predicting the economy’s path and coming out of a pandemic and with a war raging, the task gets harder.

“The Fed is currently navigating in an economic and financial environment that is more complicated than any other in recent history,” Wells’ Alvarado said. “We believe that the number of rate hikes in 2022 remains flexible and dependent on how the economy, the pandemic, and inflation levels continue to evolve.”

The first of those 25 basis point hikes is expected on Wednesday, after the Federal Open Market Committee’s two-day meeting. What happens after that is unknown.

“Ostensibly, the Fed is trying to balance inflation and economic growth,” he said. “However, historically runaway inflation has proven harder to break than growth.”

And while he thinks the Fed doesn’t consider this runaway inflation, policymakers’ concerns will lead to “continued hawkish rhetoric as they collect more data.”

Things are “far more challenging for central bankers,” said DWS Group U.S. Economist Christian Scherrmann “Geopolitical risks emanating from the Ukraine/Russia conflict have made the economic outlook far more uncertain and have worsened financial conditions and may prolong some price pressures that might otherwise have moderated.

Also, monetary policy cannot solve some issues that have elevated inflation. “Price pressures provoked by global supply chain disruptions, for example, will not vanish because policy rates are raised,” he said. “For now, the central banks’ primary target must therefore be to control inflation expectations, which depends on central bankers retaining people’s confidence that they will enact the policies needed to stabilize prices.”

The meeting, Scherrmann said, “will therefore be an important test of credibility.”

The uncertainty may mean balance sheet reduction “could be more moderate than initially expected,” he said, although when the minutes of the meeting are released, they provide insight “on how the Fed intends to design the reduction of its balance sheet.”

Directing a soft landing “won’t be easy,” Scherrmann added, “but at present we don’t believe the economy is set on a path to recession as rates rise.”

While labor markets are “recovering” and the economy appears “robust,” he said, growth probably falls victim to inflation and higher interest rates. “We expect that scenario to be reflected in the FOMC’s updated Summary of Economic Projections,” Scherrmann said. “In terms of credibility, the longer-run projections on the appropriate policy path will be crucial in the March meeting. Too low interest rates might suggest to the markets that the Fed is not taking its inflation fighting role seriously enough. Too high rates, on the other hand, might weigh heavily on financial conditions.”

The Fed may still view inflation as transitory, said Jeff Klingelhofer, co-head of investments and portfolio manager at Thornburg Investment Management, “but officials have been forced to quiet their rhetoric on the notion because it’s no longer politically acceptable to utter the word transitory.”

And while the Fed was likely to face a hiking cycle, he said, “President Biden strong-armed” them to abandon “the word transitory and commit to a hiking cycle.”

As a result, Klingelhofer said, “the Fed has painted themselves into a corner, holding a timeline for transitory,” which forces them to continue raising rates as long as inflation is elevated. “Officials at the Fed have their fingers crossed that inflation falls before they get much above a 1% fed funds rate which is likely to be close to neutral.”

And this is bad for the bond market, he added. “Spreads entered the rising rate environment from an already tight positioning, even with the belief that rising rates resulted from strong and sustained rates of growth,” Klingelhofer said. “Simply put, spreads have minimal room to continue to tighten. On the flip side, rates have moved higher and can absolutely move up from here, resulting in a tough outcome for many bond investors.”

But there’s hope for investors, he said. “Higher rates aren’t a recipe for doom and gloom,” Klingelhofer said, especially if the Fed negotiates a soft landing.

The Fed hikes might come “at precisely the wrong time,” he said, as inflation wanes and the economy slows. “We take solace in that the Fed remains patient and will pause at a level that remains below neutral.”

But a 50-basis-point liftoff was never considered by Julian Brigden of Macro Intelligence 2 Partners, “in part because such a move would suggest the Fed was behind the curve, something a central bank doesn’t want to admit.”

Also, since this will be a tightening cycle, he said, “there is no need for initial shock and awe. Better to start slow and steady.”

Federal Reserve Board Chair Jerome Powell’s will offer a hawkish message in his press conference, Brigden said. “Bottom line, even if headline inflation peaks into the summer, the Fed is embarking on a multiyear tightening of rates and reduction in the balance sheet. That’s the message that Powell will have to convey.”

The Fed faces “an unenviable choice,” said Huw Roberts, head of analytics at Quant Insight. “Their ability to engineer a soft landing was already fraught but now the Ukrainian conflict and its impact on energy and food makes it nigh on impossible.”

The question is how tight financial conditions become in response to Fed tightening, he said. “That answer will include the level of credit spreads, shape of the yield curve, currency strength etc.”

Turning to the Summary of Economic Projections, Ivan Naranjo, fixed income portfolio manager at Homestead Funds, expects “a more hawkish tone from the Fed to counterbalance the latest uptick in inflation.”

The median long-term expectations will offer a clue about where the Fed expects the terminal rate, he said, “and could give us a hint of how worried they are about higher inflation for longer.”

At future meetings, Naranjo said, “the possibility of a 50 bps rate hike … is very real.”

Most “FOMC participants will raise their inflation and rate hike forecasts in the Summary of Economic Projections next week, but reduce GDP expectations,” they said. “That’s not necessarily stagflation, but it puts them in an increasingly uncomfortable spot with higher inflation and slowing growth.”

And uncertainty will take center stage, with a reminder that policy will depend on data, Tilley and Thomas said. “That need to remain nimble is always the case, but should get more air time in the current environment.”

Separately, the University of Michigan consumer sentiment index fell to 59.7 in the preliminary march read from the final 62.8 in February, as the war in Ukraine has caused gas prices to spike.

The Regents of the University of Michigan (Aaa/AAA//) is set to price daily $582.74 million of taxable general revenue bonds, Series 2022C. Goldman Sachs.

China’s real estate crisis isn’t over yet, IMF says
Rent prices have dropped the most in these 5 U.S. metro areas. Why it’s cheaper to rent in many markets
Ethereum Network’s Rising Gas Fees in 2023: A Balancing Act of Growth and Cost
LTC, AVAX, APT and FTM prepare to rally as Bitcoin price targets $24K
Munis firmer across the curve, outflows return