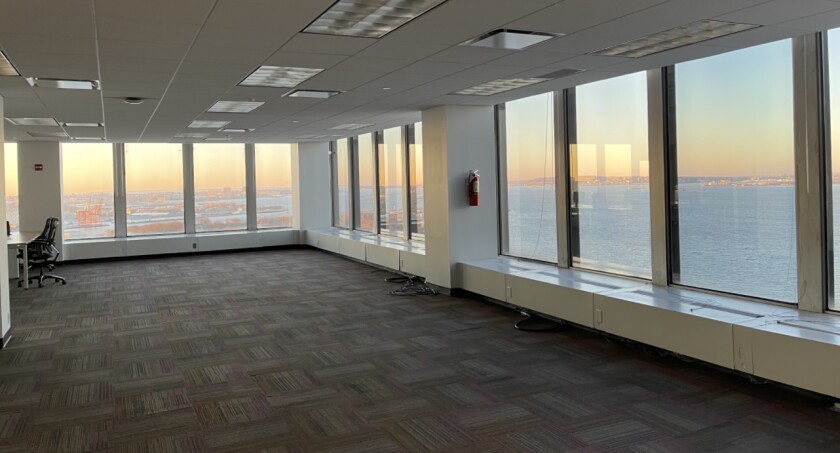 News about the “novel coronavirus” was intensifying in March 2020. The World Health Organization declared a pandemic March 11. The NBA and NHL suspended their seasons March 12 after a Utah Jazz basketball player tested positive for COVID-19.

But most office workers reported to work on Friday, March 13. When they returned home, most knew they wouldn’t be back on Monday, and would work from home instead. They did not know it was the beginning of a revolution in white-collar work culture that is likely to outlast the pandemic, and challenge governments like New York City’s with revenue and service structures built around the old order.

Two years later, New York City is starting to claw its way back to economic recovery. The coronavirus has killed almost 40,000 city residents and the national death toll is nearing one million.

As the city maps the path toward a new normal, it must come to grips with changes to work patterns that filled skyscrapers from Midtown to Lower Manhattan with people who endured long commutes to conduct work over computers connected to the internet.

Turns out, you can do that without the long commute, or any commute at all.
Work from home went from a temporary measure to the norm for millions of white-collar workers in the city and around the world.

That is going to have a long-term impact on businesses that served the office work economy and generated tax revenues cities relied upon. More workers are likely to work from home, and many of the rest are likely to come in less than five days a week, one expert said.

“The long-run impact is likely to cut city center retail spending by about 10% as office workers move to a hybrid work from home schedule,” Nicholas Bloom, a professor at the Stanford University’s Institute for Economic Policy Research, told The Bond Buyer. “The typical office worker will be commuting two or three days each week, which means only half the time they will be in town, reducing spending on lunch, shopping and going out.”

He said the biggest impact would be felt in the real estate industry.

“Most people won’t notice the impact much, as cities will be a little less crowded, but not a huge drop. (Retail) businesses will be fine as rents will adjust down for lower footfall,” Bloom said. “The main losers from this are commercial landlords with retail property in downtown areas who will take the hit as they will need to cut rents.”

Bloom, along with Jose Maria Barrero of the Instituto Tecnologico Autonomo de Mexico and Steven J. Davis of the Booth School of Business at the University of Chicago, wrote a research report on “Why Working From Home Will Stick.”

It is part of a project by WFH Research called the Survey of Working Arrangements and Attitudes, which was founded in May 2020 in response to the impact of COVID-19 on work. It publishes a monthly online survey done by the University of Chicago, ITAM, MIT and Stanford University.

“COVID-19 drove a mass social experiment in working from home,” the report said. “Our data say that 20% of full workdays will be supplied from home after the pandemic ends, compared with just 5% before.”

The reported noted five reasons for the shift.

“New Yorkers, it’s time to get back to work,” the New York Post quoted Adams as saying in February. “You can’t tell me you’re afraid of COVID on Monday and I see you in a nightclub on Sunday.”

The mayor said white-collar workers who continue to work from home were hurting service-oriented businesses and low-income workers.

The city is one of the biggest issuers of municipal bonds in the nation. It had about $38.13 billion of general obligation bonds outstanding as of the first quarter of fiscal 2022.

That doesn’t include the various city agencies that issue tax-exempt and taxable bonds such as the Transitional Finance Authority or the Municipal Water Finance Authority, which have $41.64 billion and $31 billion outstanding, respectively.

Many of these agency bonds are backed by revenues from taxes and fees, which dropped dramatically during the height of the pandemic.

The return to office will be slow, but steady, John Hallacy, founder of John Hallacy Consulting LLC, told The Bond Buyer.

“The RTO movement is developing in a patchwork quilt kind of approach. The often cited 3-2 schedule may become the norm, but is not practical for all industries,” he said. “Clearly, financial services appear to be focused on getting back to a regular schedule.”

He said that other changes were coming.

“Mayor Eric Adams is right to be encouraging RTO. The commercial sector in NYC makes a significant contribution to tax receipts in the city. Type A space should fill up faster while other tiers may need to be adapted for new uses,” Hallacy said.

The city’s jobless rate was 8.8% at the end of 2021, above the national average but down from pandemic highs.

New York City Comptroller Brad Lander said adjusting to remote and hybrid work — and its impacts on office space and employment — is one of the greatest challenges to the city’s economic recovery.

“Going forward, I hope to see less finger-wagging and more creativity and collaboration from both the public and private sectors to reimagine office space and jumpstart the jobs and businesses of tomorrow,” he said at a recent City Council budget hearing.

According to Lander’s office, the latest security card data from Kastle Systems shows office occupancy rose to 33.8% for the week ending March 2, up from 30.8% in the prior week prior and 10.6% in the week of Dec. 29. Office occupancy in the city is above San Francisco where rates are under 30%, but well below Dallas and Austin, where office occupancy has risen above 50%.

In New York, the future of mass transit is in the balance with farebox revenues down after subways, buses and commuter trains seeing a dramatic decline in ridership during the pandemic.

The MTA’s bridge and tunnel traffic hit 97% of pre-pandemic levels last month, “reflecting the post-omicron return, and the longer-term pandemic shift in commuting from public transportation to driving,” the comptroller’s office said.

After another round of federal aid in January, a $6.2 billion infusion that marks the Federal Transit Administration’s largest-ever grant, the MTA has pulled in more than $20 billion of federal coronavirus relief. But without pre-pandemic ridership levels, financial sustainability will be hard to achieve.

“The idea that it will be years before the MTA needs to find a solution to its structural imbalance is troubling.” State Comptroller Thomas DiNapoli said in a February news release.

Former Lt. Gov. Richard Ravitch says luring back workers to the transportation system is key to the city’s health.

“New York City will come back. I think it will take more time, but it will happen,” he said during a webinar on the city’s finances held by the Volcker Alliance.

But the city’s transit system concerns him.

“The only way they can meet their obligations — and hopefully deal with an increasing ridership because right now their revenues are way off because of the decline in ridership — is to get a revenue stream enacted by the Legislature to create another source of borrowing. There is no other alternative. There’s no fairy godmother,” Ravitch said.

Time will tell how long it will take the city to recover economically.

“Property values rebounded in the most recent tentative property roll, residential real-estate transactions have been strong and tax collections to-date are $1.6 billion above the November forecast,” Lander said at the budget hearing.

While the city still faces many risks and uncertainties, from Russia’s war on Ukraine to inflation and interest rate hikes, “the indicators point uniformly to an ongoing recovery over the coming year,” Lander said.

“As to how long all of this will take it is anyone’s guess. We may not see significant progress for six months to a year,” Hallacy said. “The summer will be a good test to see whether tourists return in numbers. With the pandemic waning, I expect we will see more tourist crowds. New Yorkers might even complain less.”