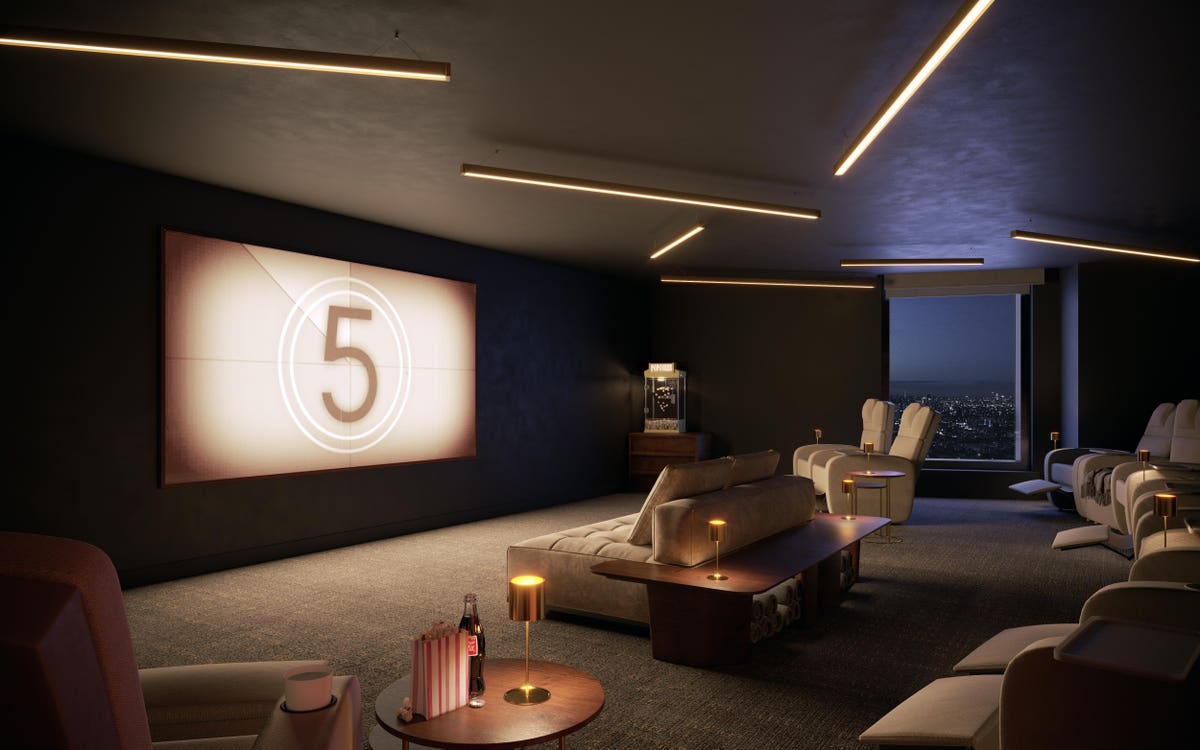 Those who live for the NCAA Basketball Tournament every March know this is more than a sporting event. It’s a religion, one that requires strategic placement in front of a hangar-sized TV to catch every nail-biting second. To fully enjoy, you don’t want to view from beyond the arc, but instead from almost close enough to clean the glass.

Now that Selection Sunday has dealt Big Dance invitations to the field of 68, it’s time for Brooklynites to make their own picks of screening rooms in luxury residential buildings across the borough. Will you Eurostep into a posh big-screened setting in Prospect Park? Fast break toward a voguish viewing room in Fort Greene? Or pick and roll in the direction of a resident lounge within a luxury building in Williamsburg?

Just as the tourney will do, we’ve winnowed the field of hopefuls to four, all earning top seeds in their regions.

If you don’t live in one, identify a well-placed friend who does. And then get open.

This Fort Greene luxury property is as easy to like as a game-winning buzzer beater from your favorite Cinderella. At its base, there’s a public plaza that frequently hosts cultural programming. At its summit stretches a sprawling emerald rooftop terrace created by the same folks who placed their imprimaturs upon The High Line.

Developed by Two Trees and designed by acclaimed architects Enrique Norten and Ismael Levya Architects, 300 Ashland offers an abundance of amenities to keep you busy until tipoff. Hit the 29th floor, 24-hour fitness center. Grab your bike from the bike room and pedal around Brooklyn. Or brace for the imminent nerve-wracking tension by grabbing some air on the rooftop sundeck.

Then settle into the well-upholstered chairs in the sleek, modernist resident lounge as heart-stopping hoops drama unfolds.

Veteran tourney watchers know teams that advance tend to be strong at every position. They’ve got forwards who can crash the glass, centers who rock the rim and guards who are deadeye from downtown. It’s that versatility that lets them make a run.

One South First, developed by Two Trees, is a winner based on being just as well rounded. Inside, the building offers a 24-hour fitness club, fitness class studio, resident lounge, billiards room, playroom, networking space, work-from-home lounge, private conference room and private board room. Outside, there’s a pool and sundeck, outdoor grilling stations and dining areas and rooftop cabanas, not to mention all the wonders of Williamsburg.

The key asset for anyone following the tournament all the way to the Final Four? The luxury screening room, furnished with cushiony chairs out of which you’ll find yourself leaping — all the way from play-in games to the championship round.

At tournament time, it’s essential your team’s roster includes some bigs to go up against smaller rivals. Sheer size can also deliver a leg up among a crop of luxury multifamily buildings. Within this grouping, The Ashland, developed by Gotham Organization, commands the height advantage. At 568 feet and 52 floors, this Fort Greene property is tall enough to take on all kinds of comers. Moreover, it’s become a landmark of sorts for Brooklyn’s Cultural District.

Take in the Sweet 16 or Elite 8 from The Ashland’s beautiful media room — as clean, uncluttered and comfortable as a beloved family den – and it’s a slam dunk you’ll feel head and shoulders above other fans.

The designers who crafted the sumptuous screening room at Brooklyn Crossing might consider second careers as college roundball coaches. It’s obvious from the photo at top they could teach a few teams about proper spacing. On the hardwoods, spacing is crucial to avoiding double teams and turnovers. In screening rooms, such as the one at this Brodsky Organization and Greenland USA-developed property, the right spacing of armchairs and cocktail tables allows for clean sight lines and uninterrupted rooting.

While you won’t command a perfect bracket this or any other year, you won’t go wrong catching March Madness in any of the above settings.

Once you find the one you like best, don’t get caught traveling.