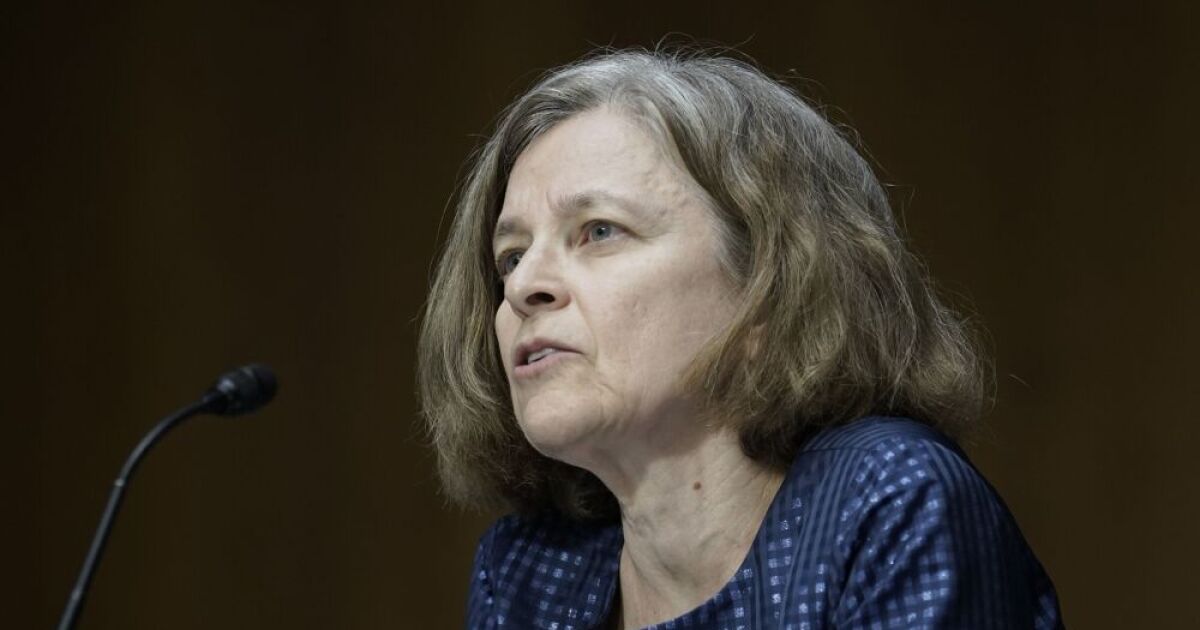 WASHINGTON — Sarah Bloom Raskin, President Biden’s pick for vice chair for supervision of the Federal Reserve, has taken herself out of the running for the position.

Raskin submitted a letter to the White House on Tuesday saying she would step aside so the politically gridlocked Senate Banking Committee would move forward with the Biden administration’s other four Fed nominees. A copy of the letter was first reported by The New Yorker.

“There is hard and urgent work ahead for the Federal Reserve,” Raskin wrote in her withdrawal letter. “If I step away from this confirmation process, there can be no excuse left for a continued boycott of the Constitution’s ‘advice and consent’ process and the Senate’s corresponding refusal to attend to our nation’s real economic needs.”

The move comes a day after Sen. Joe Manchin, a centrist Democrat from West Virginia, said he would not support Raskin’s confirmation if a vote were brought to the Senate floor. The former Fed governor and deputy Treasury secretary already had her candidacy stifled by Republicans on the Senate Banking Committee who were skeptical of her past views on addressing climate risks through regulatory policy.

Word that Sen. Susan Collins, R-Maine, would also oppose her nomination further dimmed hopes that enough Republicans would emerge to support her in the broader Senate.

After initially raising issues with several of Biden’s nominees, Republicans on the committee, led by Sen. Pat Toomey, R-Pa., said they would advance the rest of the slate once Raskin was no longer in the running.

Senate Banking Committee Chair Sherrod Brown, D-Ohio, said in a statement late Tuesday that Raskin’s withdrawal meant “the American people will be denied a thoughtful, experienced public servant who was ready to fight inflation, stand up to Wall Street and corporate special interests, and protect our economy from foreign cyber attacks and climate change.”

Brown also said that the committee would hold a vote on the four remaining Federal Reserve Board nominees. Lisa Cook, an economics professor at Michigan State University, and Philip Jefferson, a former Fed economist and current administrator at Davidson College, have been nominated to fill vacancies on the board. Sitting members Jerome Powell and Lael Brainard have been nominated as chair and vice chair, respectively, both of which require congressional approval.

“At this critical moment in our economic recovery — as the country fights inflation and faces uncertainty due to Russia’s unprovoked invasion of Ukraine — I implore my Republican colleagues to do their jobs, show up to vote YES on the remaining, eminently qualified Federal Reserve nominees,” Brown said.

In her letter, Raskin accused Republicans of holding the other nominees “hostage” and turning the debate over the financial risk of climate change into a “tawdry political issue.” She also reiterated her regulatory stance and pushed back against the idea that her views were radical.

“It was — and is — my considered view that the perils of climate change must be added to the list of serious risks that the Federal Reserve considers as it works to ensure the stability and resiliency of our economy and financial system,” she wrote.

Raskin’s view on the role of climate risk in bank supervision became a flashpoint of Republican opposition to her nomination. Before receiving the White House nod, Raskin criticized Fed decisions to allow oil and gas firms to access emergency liquidity facilities in the early months of the COVID-19 pandemic. She has also urged federal bank regulators to better prepare for climate-related risks to the financial system.

Raskin argued in her letter that considering climate change in financial models is already mainstream, with insurance companies, commercial banks and other central banks already taking steps to assess such risks.

“Central banks around the world have already begun acting on these issues,” she wrote. “Chairman Powell has recognized climate change as a significant risk that needs to be incorporated into the supervisory process. Any vice chair for supervision who ignored these realities — which are manifesting every day across this country — would be guilty of gross dereliction of duty.”

Yet some felt her prior advocacy against energy companies being allowed access to the Fed’s emergency lending facilities was a bridge too far. Former Fed Gov. Laurence Meyer, a Democrat who served from 1996 to 2002, said such a stance “crossed a line,” going beyond the central bank’s supervisory mandate.

“It wasn’t just making sure that they were assessing risk appropriately; she thought that the Fed should use its lending conditions to shrink the size of the fossil fuel industry,” Meyer, co-founder of Monetary Policy Analytics, said. “That’s beyond the line that Powell and the rest of the committee has ever gone. And it’s absolutely clear that the Republicans would never accept that. I’m actually surprised that so many Democrats were willing to accept it.”

Brown’s statement again pushed back on the idea that Raskin was a climate radical, saying that “too many of my colleagues” had fallen for “talking points written by the oil and gas industry.”

After Manchin came out against Raskin on Monday, many analysts and observers anticipated Raskin would either withdraw by choice or at the request of the White House. Still, the withdrawal is a clear setback for the Biden administration, especially given Raskin’s experience and prior success in winning Senate approval. She had been confirmed by the Senate by voice vote — a parliamentary procedure indicating she saw no serious opposition from Republicans — for the Federal Reserve in 2010 and Treasury in 2014, less than a decade ago.

In a White House press release, President Joseph Biden thanked Raskin for her service and blasted Republicans for their assault on her candidacy. “Despite [Raskin’s] readiness — and despite having been confirmed by the Senate with broad, bipartisan support twice in the past — Sarah was subject to baseless attacks from industry and conservative interest groups,” Biden said. “Unfortunately, Senate Republicans are more focused on amplifying these false claims and protecting special interests than taking important steps toward addressing inflation and lowering costs for the American people.”

Republicans have increasingly rallied in support of the oil and gas industry in recent years, and GOP senators, led by Ranking Member Toomey, claimed that Raskin would seek to starve the industry of capital and credit if she was confirmed to the Federal Reserve.

“It seems very clear to me that you believe that climate change is a very, very dire, imminent threat,” Toomey told Raskin during her confirmation hearing in February, “and appropriate for financial regulators, including the Fed, to allocate capital away from those companies that are contributing the most to the carbon in the atmosphere.”

Raskin said that it was not her intention to block fossil fuel companies from accessing credit, nor would she be able to do so as vice chair for supervision. “The Fed should not pick winners and losers,” she said.

Later in February, Republicans announced that they would boycott the Senate Banking Committee’s executive session that would advance the Biden administration’s Federal Reserve nominees to a vote on the Senate floor.

Powell has said he would respect the next vice chair for supervision’s right to make their mark on the position. This has left several key policy decisions in limbo. It is unclear who on the board will set the regulatory agenda in the interim.