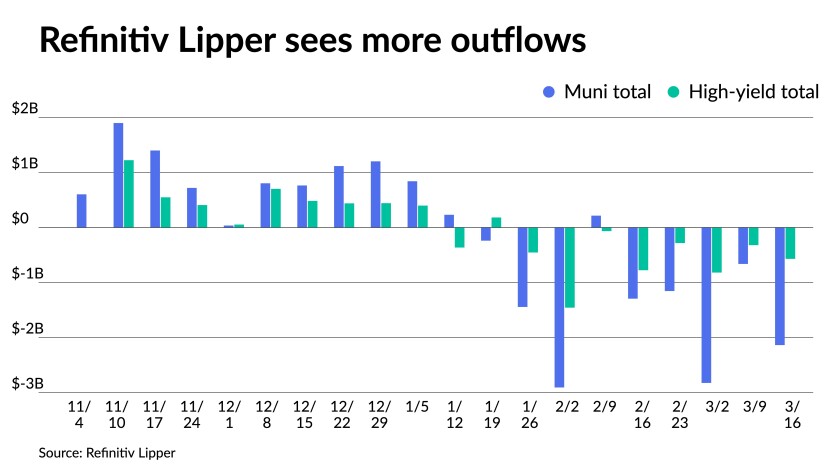 Municipal yields fell on Thursday for the first time since March 1 as buyers emerged, while U.S. Treasuries rose out longer and equities improved again a day after the Fed’s first rate hike.

Trading was stronger out of the gates, with large blocks of high-grades changing hands at stronger levels. Triple-A benchmark yields were bumped up to six basis points with the best strength out long, while USTs were little changed 10 years and in and saw the long bond hit just shy of 2.5%.

Thirty-day supply sits at $14.96 billion, per Bond Buyer data, and it should begin to pick up from a seasonal perspective, which can be bearish for the sector, Matthew Gastall, executive director and head of wealth management municipal research and strategy at Morgan Stanley, said.

While the supply-demand dynamic and rate movements impact overall market technicals, he said investors should work on duration and credit strategies.

“This is one of those periods where you should be monitoring credit structure, call dates, call options, final maturities and above-market coupon structure,” Gastall said, adding these elements will impact performance in investors’ portfolios going forward.

The essential-service paper is still stable, high-quality paper, but in the rare event it encounters fiscal pressure, it will receive support from their respective municipalities and will continue to operate uninterrupted, Gastall said.

If continued rate weakness occurs, Gastall warned that the market could potentially see evidence of a negative convexity trade, where lower-coupon bonds between 2.5% and 3% could reset from their call options to their final maturities, sparking increased volatility.

“It’s not something that could happen tomorrow, but over the course of a few months and years, so investors have to be careful of that,” he said.

Defensive investors are currently keeping an eye on coupon calls and final maturities, he noted, while offensively, others are offsetting that strategy by buying higher-coupon bonds with short calls.

“Even if rates stabilize for quite some time, munis may slowly and gradually respond over time,” he said.

The average seven-day simple yield for the 148 tax-free and municipal money-market funds rose to 0.03%.

Treasuries were mixed while equities rose.

FOMC redux
Now that the Federal Open Market Committee has set a plan — rate hikes throughout the year and balance sheet reduction announced as early as its May meeting — analysts opined.

“Tighter policy, yes, but not tight enough to derail the economy or curtail inflation, in our view,” said the Payden & Rygel economics team. They suggest a 50-basis-point increase could occur if core personal consumption expenditures fail to slow.

Assuming the economy continues to grow with a terminal fed funds rate close to 3%, they ask, “will ‘ongoing’ rate hikes do anything to curtail inflation?”

Using the punchbowl analogy, the Fed is emptying the punchbowl “one spoonful at a time,” Payden & Rygel says. “Such deliberate removal of accommodation is unlikely to derail growth nor curtail inflation in the near term. Sure, interest rates will steadily increase, but not quickly enough to end the party — neither in the ‘real’ economy nor the financial markets.”

Berenberg Capital Markets Chief Economist for the U.S. Americas and Asia Mickey Levy, a member of the Shadow Open Market Committee, said, “the Fed’s delays in beginning to raise rates has placed it between a rock and a hard place,” that will make a soft landing “challenging.”

“While [Chair Jerome] Powell in his press conference claimed the Fed does not see evidence of a wage-price spiral, it is clear current labor market conditions and inflationary expectations are influencing wage and price setting behavior, particularly in the services sector,” Levy said. “Everything seems to have surprised the Fed.”

The Russia invasion of Ukraine “has muddied the Fed’s calculus,” he said. “A commodity price shock, the risk of slumping economic activity in Europe, and declining real purchasing power tilts economic risks to the downside and raises the probability of a stagflationary outcome.”

While such conditions in the past led to tentative and cautious moves, Levy said, “the Fed may not be afforded that luxury under present circumstances of elevated underlying inflation. Powell throughout his press conference stressed the Fed’s commitment to price stability, and the need to take action to ensure that higher inflation does not become entrenched, yet even with rate increases, rising inflation and inflationary expectations are likely to keep real rates deeply negative.”

But policymakers “erred on the hawkish side” in the dot plot, said Andrzej Skiba, head of U.S. Fixed Income at RBC Global Asset Management. Their projections, he said, suggest “inflation is not likely to fall below the 2% level until after yearend 2024.”

While the projections “initially caught markets off guard,” Tom Garretson, senior portfolio strategist at RBC Wealth Management, said, “Powell appeared to quell some fears around a more-hawkish-than-expected Fed during his press conference.”

While the Fed is likely “to move at a measured pace,” Garretson remains “wary of the possibility that the Fed risks raising rates until something breaks in the economy, which has been reflected in sharply flatter Treasury yield curves, and inversions within certain segments, following the Fed meeting.”

Ron Temple, head of U.S. Equities at Lazard Asset Management, agreed the markets were surprised by the pace and quantity of expected hikes. “While tough talk is important,” he said, “the Fed needs to ensure its doesn’t overshoot and turn a robust recovery into a recession.”

The Fed’s moves “are fully expected based on the evolving view of inflation growth and the fact that the jobs market has been more positive over the last three months than expected,” said Steve Skancke, chief economic advisor at Keel Point.

But policymakers offered “a fair amount of dispersion” about how much rates should rise in the coming quarters, said Wells Fargo Securities Chief Economist Jay Bryson. “Some of this dispersion in views may represent the uncertainty that the Russia-Ukraine conflict crisis, which the FOMC explicitly noted, imparts to the economic outlook.”

The war, in the short-term, is “likely to create additional upward pressure on inflation and weigh on economic activity,” the FOMC statement said. “This combination creates a dilemma for the FOMC,” Bryson said. “Higher inflation implies that the Committee would want to tighten aggressively, but slower growth would argue for fewer rate hikes. What are monetary policymakers to do?”

If the economy doesn’t “come completely off the rails in the near term,” he said, “Fed rate hikes at the next few meetings seem more or less like sure bets. Thereafter, the Committee may become much more data dependent.”

The Fed is determined to fight inflation without sinking the economy, said Marvin Loh, senior macro strategist at State Street Global Markets. Policymakers “may need to continue tightening even in the face of waning growth,” he said. “As a result, the treasury curve has flattened, an indication that the risk of a policy mistake has risen.”

Addressing the lack of details on balance sheet reduction, Loh said, it may “signal that the Fed is concerned with tightening financial conditions as a result of its aggressive hiking schedule and the potential fallout of geopolitical developments. We will pencil in a start of [quantitative tightening] within the next six weeks, while and market volatility may push its start out by a few meetings.”

“Our read is that the Fed pivoted as hawkishly as it could, signaling that it will continue to raise rates until inflation expectations stabilize,” he said. “This can only be accomplished by sapping demand, with the chair pointing out that an overheating jobs market was an unhealthy outcome. This raises the risk of a recession but provides some comfort that the Fed thinks it can control inflation in the relatively near future.”

With post-pandemic issues driving inflation, Loh said, “it is unclear how quickly rate hikes will take to influence prices, making each data point important with every meeting Fed meeting a live event.”

But if the Fed tightens as the SEP suggests, Scott Anderson, chief economist at Bank of the West, said, “the Fed runs a considerable risk of driving U.S. economic growth lower than the FOMC’s current projections in 2022 and 2023, and indeed we cannot completely discount the rising risk of the central bank pushing the U.S. economy back into recession by next year.”

After the meeting, he noted, there was an inversion in the 5-year/10-year Treasury spread, suggesting “the fixed income market is increasing its bets that the Fed will need to shift gears soon after this tightening and begin cutting its policy rate in response to slower growth.”

And while the Fed was hawkish, Andy Sparks, head of Portfolio Management Research at MSCI, pointed out the Fed’s 4.3% PCE inflation expectation for this year “is noticeably more optimistic than the market implied inflation forecast of 4.95%.” If the market’s forecast is accurate, he said, “the Fed may need to tighten monetary policy more than previously thought.”

But, stagflation, which concerns investors, wasn’t mentioned, he said. “The anchor played by bonds in multi-asset portfolios has resulted in the growth of many investment strategies, including the popular 60-40 portfolio,” Sparks said. “But in a stagflation scenario, the combination of slower growth and high inflation would reduce the value of this anchor and is one of the scenarios that many market participants want to avoid.”

Powell also failed to address how the U.S. economy may be harmed by other developed markets’ being impacted by the Russia-Ukraine war, he said.

Also with eyes on Russia, David Page, head of Macroeconomic research at AXA Investment Managers, said, “We are wary that the Fed is underestimating the impact of the invasion on the U.S. outlook — with little change beyond near-term adjustments.”

Should the economy slow from the war, he said, “financial conditions would tighten further and growth slow more than current projections and this would see the Fed needing to tighten policy by less — probably by the end of this year and more certainly across next year.”

Still some analysts have doubts. “We believe that the seven 25 bps rate increases the futures market is pricing in for this year very much represent an upper limit of potential hikes and that this scenario is unlikely to materialize,” said Jason England, Global Bonds Portfolio Manager at Janus Henderson Investors.

Also, the meeting had fewer participants than normal as President Biden’s nominees have yet to be confirmed. “Importantly, we believe that eventual new members will lean toward the dovish camp, reinforcing our view that the market’s expectations have gotten ahead of reality,” he said. “It’s worth recalling that throughout Chairman Jerome Powell’s tenure, when given the choice between two paths — and having not been mugged by multi-decade highs in inflation — he’s opted for greater accommodation.”

Also, England noted, supply issue fueled the price hikes, and “Unfortunately for the Fed, the blunt instrument of rate hikes tends to be less effective in combating inflation driven by supply factors than it is in quelling periods of accelerating prices driven by full-throttle demand.”

The addition of geopolitical events to the mix, he said, “amplifies our concerns about the potential for monetary policy error. Policymakers must perform a perilous balancing act. Should the Fed overtighten, the U.S. economy could slip into recession. If it falls behind the curve and higher inflation expectations become embedded, bond valuations could come under pressure as higher discounts are commanded to compensate for the diminished value of future cash flows.”