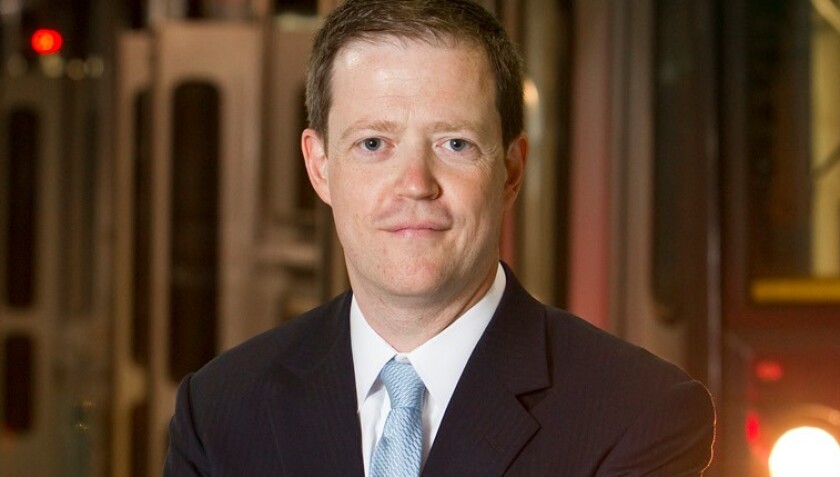 Former Massachusetts Secretary of Transportation Richard Davey has been chosen to be the next president of New York City Transit.

He will take over as president and chief operating officer on May 2 from Craig Cipriano, who has served as interim president since August 2021.

Since 2011, the MTA has sold about $43 billion of debt. The MTA’s bonds are rated A3 by Moody’s Investors Service, BBB-plus by S&P Global Ratings, A-minus by Fitch Ratings and AA by Kroll Bond Rating Agency. Moody’s and S&P have stable outlooks on the credit while Fitch and KBRA have negative outlooks.

As CEO of the Massachusetts Department of Transportation, Davey was responsible for the operation of the state’s highways, bridges and tunnels, freight and passenger rail programs, regional transit agencies and airports.

Beyond his operational duties, Davey led a campaign to raise revenue, including helping to raise the gas tax in Massachusetts for the first time in 23 years, which provided stable operating budgets and the largest statewide investment in transit in the state’s history.

Local leaders picked Davey to be the CEO of Boston 2024, the organization that led the failed campaign for the city to host the Summer Olympics. After this, he joined Transdev as a vice president before becoming a partner at Boston Consulting Group.

“To take over an operation as large as New York City Transit, the goal was to find someone with a diversified transit background and strong leadership skills,” Lieber said.

“Living in New York during 9/11 was a seminal moment in my life,” Davey said. “My experience being a New Yorker that day at that time is why I am coming back, because public service and more importantly public transportation is so important to me.”

New York City Transit is the largest public transportation agency in North America and one of the largest in the world. It has a 54,000-person workforce and consists of more than 6,600 subway cars that travel along 665 miles of track with 472 stations.

Its bus fleet is made up of 5,927 vehicles; it runs 234 Local, 20 Select Bus Service and 73 Express routes throughout the five boroughs.

After another round of federal aid in January, a $6.2 billion infusion that marks the Federal Transit Administration’s largest-ever grant, the MTA has pulled in more than $20 billion of federal coronavirus relief. But without pre-pandemic ridership levels, financial sustainability will be hard to achieve.

The MTA also has to face public perception that violent crime is rising on the subways and deal with what could be a permanent shift in white collar employees working from home.