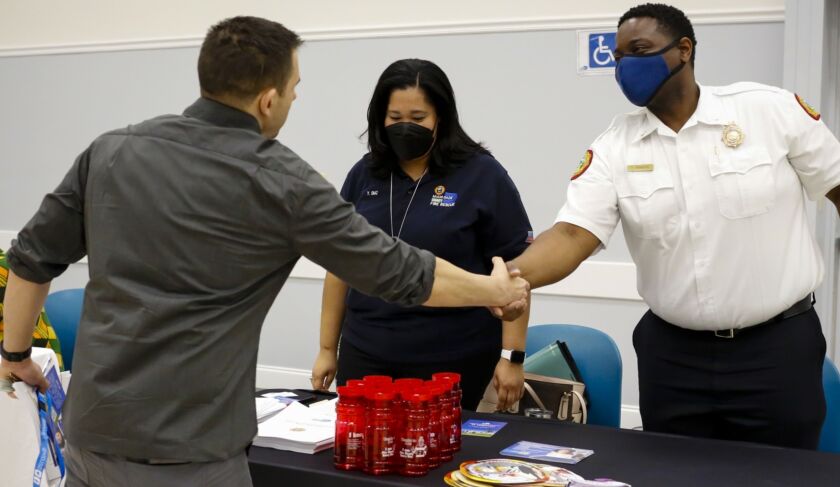 Five of these states are in the Southeast — Florida, Tennessee, North Carolina, Georgia and Arkansas — while Montana, Utah, Idaho, Texas and Arizona also hit the milestone during the first month of the year, Fitch said in a report released Thursday.

Only Hawaii, North Dakota and Louisiana have not yet reached a 70% level of recovery for jobs lost at the peak of the coronavirus pandemic in 2020, Fitch said.

“January saw the state median jobs recovery rate hit 82%, up 2 percentage points from the prior month,” Olu Sonola, Fitch’s head of U.S. regional economics, said in the report. “The new annual revision shows a steady positive employment recovery in nearly every state since July 2021, led by Texas with a 21-percentage-point increase in the recovery rate.”

Fitch noted the number of people who have left the workforce since the start of the COVID-19 pandemic remains unusually high in most states and this compounds the negative fiscal effects of job losses.

“Those who have exited the labor force are typically not generating taxable income or purchasing as many taxable goods and services and are more likely to require publicly funded social services such as Medicaid,” the report said. “Employment recovery is a key factor driving overall economic and tax revenue recovery for the states. The recovery pace for each state hinges to an extent upon how quickly workers who have exited can return to the labor force.”

Since February 2020, state labor forces have declined cumulatively by about 1.7 million through January. This is an improvement from the 3.7 million and 2.3 million declines posted in December 2020 and December 2021 and the 7.0 million fall off in April 2020.

Jobs recovery has varied nationwide, the rating agency said. As of January, Utah, Kansas and Idaho led employment recoveries on a month-over-month basis, increasing by 5.6, 5.4 and 5.0 percentage points, respectively.

Vermont is the only state with a Fitch-adjusted unemployment rate that is more than five percentage points above the official rate. Fitch said this could increase the potential for greater volatility ahead in Vermont’s unemployment rates as people look to rejoin the labor force.

“Florida’s freedom-first policies have made Florida a great state for businesses and families to grow,” Gov. Ron DeSantis said. “February’s economic data is more concrete evidence that Florida is on the right path.”

All 10 major industries in the state saw positive over-the-year job growth in February. These include leisure and hospitality, up 17.1%; trade, transportation and utilities, up 6.5%; professional and business services, up 7.1%; financial activities, up 5.7%; education and health services, up 2.0%; construction, up 3.6%; other services, up 6.1%; manufacturing, up 3.8%; information, up 9.0%; and total state and local government, up 0.5%.

“February’s jobless rate declined for all the right reasons,” Wells Fargo said in a report released Friday, noting that labor markets tightened significantly across the state.

“In February, the unemployment rate ranged from 2.0% in Monroe County to 4.5% in Hamilton County on a not seasonally adjusted basis,” the report said. “Furthermore, 23 out of the state’s 24 metro areas posted a year-over-year gain in employment growth during February.”

The largest yearly employment increases were in Orlando, up 9.2%, Miami, up 7.1%, and Tampa, up 5.5%. Sebring was the only Florida metropolitan are to see a net loss in employment in the past year, and the decline of 0.4% was relatively minor, Wells Fargo said.

Labor shortages remained a challenge for many industries, the report noted.

“In January, the job opening rate statewide was 7.3%, down slightly from the recent peak of 7.5%, but are still well above the 4.6% seen just before the pandemic,” Wells Fargo said.

Miami-Dade County saw a net decline of 38,990 residents between July 2020 and July 2021. Still, with 2.7 million residents, it ranks as the seventh largest county in the U.S. Punta Gorda, the Villages, Lakeland-Winter Haven and Cape Coral-Fort Myers ranked in the top 10 list of fastest growing metro areas in the nation.

As of June 30, the state’s total debt outstanding was $18.4 billion, down $825 million from the previous fiscal year.

Florida’s municipal bond issuance is expected to drop over the next 10 years even as revenues rise after the pandemic hit the state’s economy. The state saw about 5.8 million cases of COVID-19, with more than 72,000 reported deaths.

Over the next decade, the state’s Division of Bond Finance estimates only about $1.8 billion of net tax-supported debt will be issued, with most of the proceeds going toward transportation projects.