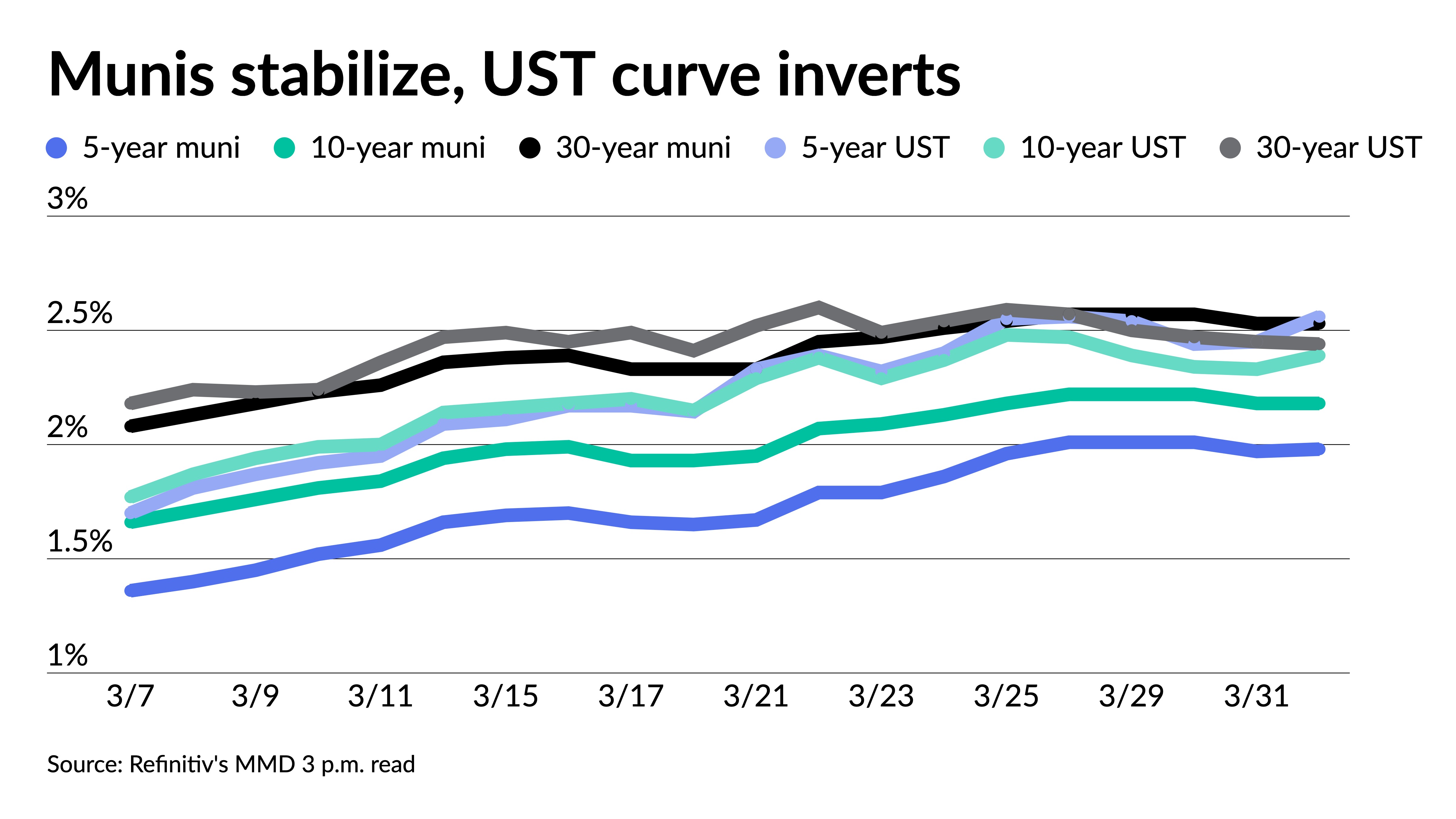 Municipals were mostly steady to close out the week, but the 30-year U.S. Treasury ended lower than the entire short end of the curve,increasing fears about the rising possibility of a recession, while equities ended in the black.

Triple-A municipal yield curves were relatively stable, while the two-, three-, five- and seven-year UST ended higher than the 10- and 30-year.

BofA Global Research strategists said the combination of a strong, hawkish Fed and rate shock will only work to restrict economic activity and keep inflation from rising higher.

“So the question now becomes: how deep of an inversion is the Fed is willing to drive,” they said. “Irrespective of recession or not, yield curve inversion is good for bond investors.”

If history is any guide, BofA strategists said curve bear flattening during a Fed tightening cycle eventually leads to a strong rally in the long end of the curve, with deeper curve inversion developing, and the end of Fed tightening will soon usher in a bull flattening as investors anticipate a Fed rate cut.

They said this time is no different, except the Fed sounds as if it intends to accomplish more in a shorter amount of time.

And while prior yield inversions have been known to signal impending recessions, AXS Investments CEO Greg Bassuk cautioned investors against putting too much faith in the inversion’s capacity to anticipate a recession in this case.

First, no single data point is flawless in recession predicting and, therefore, even prior yield inversions have been colossally imprecise at foretelling the accurate arrival time of a recession.

“Today’s environment exhibits Fed policy, geopolitical tensions, and one of the worst ever health pandemics hovering over the U.S. and global economies, all of which will impact the extent to which a recession will manifest, without regard to predictions based on yield inversion,” Bassuk said.

Furthermore, no previous yield curve inversion happened when the Fed’s actions and expectations paralleled those of today’s central bank. Because of the Fed’s one-of-a-kind involvement in bond markets, the 10-year Treasury rate has been artificially decreased, they said, and so the inverted yield curve is occurring more synthetically than spontaneously. He noted that the Fed’s massive balance sheet and the world’s historically low bond rates cannot be overlooked.

BofA Securities municipal research strategists Yingchen Li and Ian Rogow said the magnitude of this rate shock is around half that of the market crash in March 2020. The rate shock in 2022, on the other hand, will last longer and beyond the first quarter, whereas the triple-A rate shock in March 2020 was brief.

By the end of March 2020, 60% of the triple-A rate shock had been recovered and 100% by the end of May. Thus, the rate shock in 2022 will be significantly more analogous to the taper tantrum of 2013 and the Trump election victory rate shock in the fourth quarter of 2016, they said.

“If so, we look for signs of market improvement in April and possibly a strong recovery for the rest of the year,” they said.

Muni yields did not move in lockstep with Treasuries this week, with the 10-year yield decreasing 25 basis points from a high of 2.55% earlier in the week, but BofA Securities strategists said the fundamental market dynamics have obviously improved with increased muni-UST ratios across the curve. The 30-year ratio is presently at 105%, while the 10-year ratio is at 93%, according to ICE Data Services.

“While this performance is disappointing, there are encouraging signs, including $10 billion of issuance volume this week and rising secondary market activity, despite continued mutual funds outflows,” they said.

The total amount of principal and coupon redemptions in the first quarter was $113 billion. After a $20 billion outflow from mutual funds, supply and demand were about balanced, according to Li and Rogow. The cash buffer of mutual funds is unlikely to be as large as it was at the start of 2022. Unless mutual fund flows improve, they said supply/demand in April may remain unfavorable. In April, they expect $40 billion of issuance and $31 billion of principal and coupon redemptions.

Thirty-day visible supply sits at $16.91 billion and supply is slated to be $10.166 billion for the first week of April, with $8.982 billion of negotiated deals and $1.184 billion of competitive loans.

The Virginia Public Building Authority is expected to come with $465.7 million in three deals and Eugene School District #4J, Oregon with $120 million in the competitive calendar.

After April, BofA strategists said the supply/demand situation appears to be quite advantageous from May to August. At this point, they said mutual fund inflows appear to be the last missing ingredient since other market players are beginning to acquire tax-exempt munis. While mutual fund outflows may take some time to reverse, high net worth retail, cross-over accounts and insurance firms should be able to fill the gap. Mutual fund flows will be a lagging sign.

“Only when the market level has recovered some or at least stabilized for a few weeks, should mutual funds flow turn positive,” they said.

Treasury yields rose and equities ended in the black.

“Nothing in today’s report is likely to deter the Fed from its current path of rapid rate hikes,” said Jesse Wheeler, Morning Consult economic analyst.

But, Marvin Loh, senior macro strategist at State Street Global Markets, was slightly more bullish. “From a monetary policy perspective, this jobs report provides the Fed with a green light to continue tightening and raises the odds of a 50-bps hike at any/or all of the next few meetings.”

The Fed sees the labor market “as fully healed and continued gains without large increases in the size of the overall workforce may be viewed as overheating. Yields are generally higher following the employment report, while the curve is now solidly inverting, as investors consider whether the Fed needs to significantly slow growth to rein in inflation.”

The shortage of workers “will keep inflation higher for longer,” he said, “and supports the view that the Fed is set to embark on a series of 50bp rate hikes.”

The fed funds rate target could hit 3%, Knightley said, “but rapid-fire hikes run the risk of an overshoot and we see a strong chance of corrective action again in late 2023.”

While job creation is positive, National Association of Realtors Chief Economist Lawrence Yun said, “rising wages and prices are raising the prospect of potential stagflation — similar to economic conditions in the 1970s. The bond yields are touching three-year highs in anticipation of aggressive rate hikes by the Fed.”

But, Mark Dowding, chief investment officer at BlueBay Asset Management, believes that since the Fed will combine quantitative tightening with rate hikes, “markets are now at risk of pricing too much monetary tightening in the short term.”

With inflation at levels not seen in decades, “the Fed will be more reactive to upside surprises than downside surprises over the next few months, skewing the risks to the Fed doing more, not less, than the seven hikes guided to the last meeting,” said Scott Ruesterholz, portfolio manager at Insight Investment.

And with oil prices near all-time highs, he said, “inflation may move higher still before retreating later in Q2.” But inflation will stay “well above target” into next year, Ruesterholz said.

Targeting inflation at the expense of growth, he said, “has contributed to the flattening and even inverted yield curve.”

Some models suggest an increased chance of a recession in 2023 or 2024, Dowding said. “The Fed has been relatively dismissive of the yield curve as a recession predictor, preferring to focus on the front-end spread between current cash rates and market projections of cash rates 18-months forward.”

But yield curve inversion is a tricky matter, with economists offering divergent opinions.

“While a single point of yield curve inversion can be meaningful, it also can be unpredictable (like the one we briefly experienced earlier this week) and sometimes could give false positives,” said Luis Alvarado, investment strategy analyst at Wells Fargo Investment Institute. “Thus, we prefer either four consecutive weeks of curve inversion for a given indicator and/or at least 25 basis points of inversion before concluding that the yield curve has meaningfully inverted.”

Current conditions don’t suggest “a pending recession,” he said. “However, we believe a meaningful inversion that is consistent with our highest conviction yield curve indicators could foreshadow a potentially more challenging economic environment.”

And while that point has yet to be reached, Alvarado added, “this cycle has definitely moved faster than previous cycles.”

A 10-year/one-year curve inversion would signal a recession within 18 months, Alvarado said.

The Cities of Dallas and Fort Worth, Texas (A1/A+/A+/AA/) is set to price Wednesday $1.188 billion of taxable Dallas Fort Worth International Airport joint revenue improvement bonds, Series 2022A, terms 2051 and 2051. Citigroup Global Markets.

The Board of Regents of the University of Texas System (Aaa/AAA/AAA/) is set to price Tuesday $302.045 million of revenue financing system bonds, Series 2022A. Morgan Stanley.

The Dormitory Authority of the State of New York (//BBB-//) is set to price next week $110 million of Wagner College revenue bonds, Series 2022. Morgan Stanley.

The Pantone 2023 Color Of The Year Makes A U-Turn
Mortgage rates fall for the third straight week, but demand still drops further
Stocks making the biggest moves after hours: Asana, Zscaler, Marvell and more
PREPA judge approves one-week delay for restructuring proposal
These are shaping up to be the best and worst luxury real estate markets for 2023