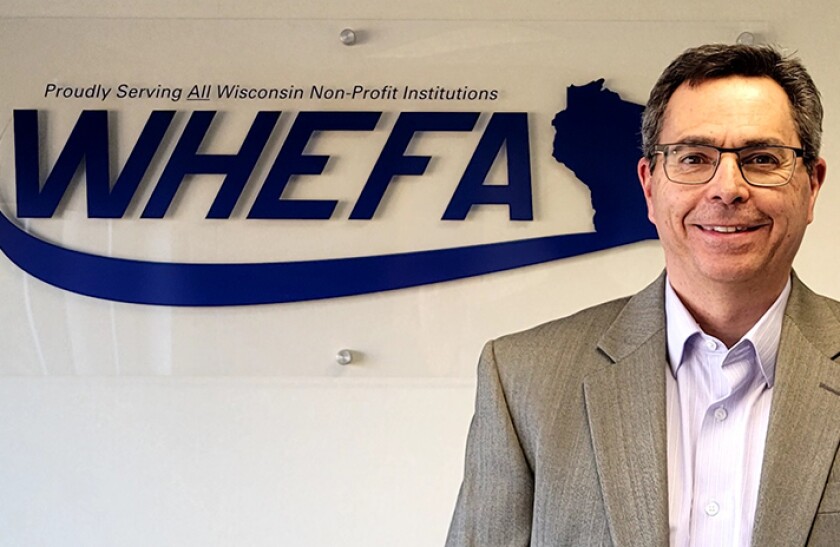 Larry Wiemer II took over last month as executive director of the Wisconsin Health and Educational Facilities Authority after three decades working in key financial roles for healthcare providers and other not-for-profits.

The agency conducted a national search to fill the shoes of Dennis Reilly who spent 26 years at the state conduit including the last 10 as executive director. He announced earlier this year plans to depart and join Ohio-based Fifth Third Bank to establish a not-for-profit lending footprint in the state once a replacement was found.

“I am honored to serve as WHEFA’s next Executive Director and am eager to apply my experience from the borrower side to build upon the strong foundation and vibrant culture that is a hallmark of WHEFA,” Wiemer said. “I welcome the opportunity to serve as an ambassador for WHEFA, promoting its services and fostering educating regarding how WHEFA serves as a valuable resource to nonprofit organizations throughout Wisconsin.”

WHEFA also promoted Tatiana Graver, who has worked at the authority for 10 years, to the position of associate executive director from manager of finance.

Since 1979, the authority has completed more than 900 financings valued at more than $30 billion. During Reilly’s tenure, he’s worked on 670 deals worth $26.5 billion.

The legislature first established the authority in 1973 to serve non-profit healthcare borrowers. Over the years its powers were expanded to cover continuing care, education and community providers and to handle cross-border financings.

In 2013, its charter was broadened to cover all 501(c)(3) organizations and in 2019 the statute was further expanded to allow an exemption on interest income from state income taxes on bond issues under $35 million.

A 2019 study by IHS Markit commissioned by the authority concluded that the agency’s 421 financings valued at $19.1 billion over the previous 15 years had helped support 7,351 jobs annually as well as $553 million of gross domestic product and $8.7 billion of new money capital projects.

Feds greenlight key O’Hare terminal project
Mortgage rates fall for the third straight week, but demand still drops further
Blackstone limits withdrawals at $125bn property fund as investors rush to exit
Options Trading: How Do Calendars Make You Money and How Do They Work
Will the Oil and Materials Stocks Rout End in 2016?