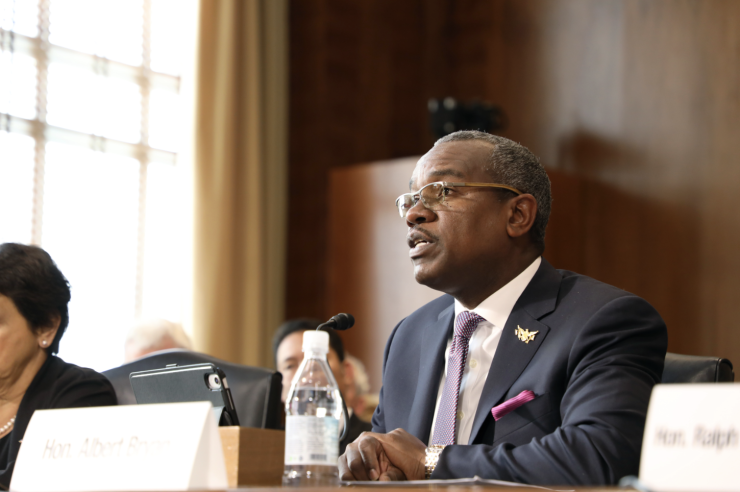 U.S. Virgin Islands government officials hailed its bond refinancing as a success in helping to solve the islands’ pension underfunding problem but skeptics remain on the islands’ future financials.

Ramirez & Co. priced $955.545 million of Virgin Islands Matching Fund Special Purpose Securitization Corp. bonds on March 31 and the deal closed Wednesday and the bonds have been trading up in the secondary. .

“For the better part of 30 years, we have known of the imminent insolvency of the Government Employees Retirement System, and without any viable solutions being proposed over the years, it grew worse,” said Gov. Albert Bryan Jr. “Because of the actions we have taken, this is no longer an issue … . The stabilization of GERS provides a foundation for the continued positive transformation of U.S. Virgin Islands.”

Sen. Kurt Vialet, who chairs the Senate Finance Committee, said “the newly issued bonds will play a major role in resolving the insolvency of the territory’s pension system once and for all.”

Virgin Islands Senate President Donna Frett-Gregory told The Bond Buyer on the day of the pricing, “If it has the true interest cost as it is presented right now, I have no concerns.”

The deal will benefit the pension system, she said, and since pensioners spend money, it will also contribute to the islands’ overall economy.

The deal did provide cost savings for the islands, which were banking on that after several failed attempts at refunding the debt over the past few years. The pension system had an adjusted net pension liability of $3.3 billion as of fiscal 2019. The islands’ actuarial firm had said without bolstering the financing of the pension system, it would run out of assets on or before October 2024.

“For investors, the new bonds offer an improvement over the retired bonds by improving their negotiating leverage in a hypothetical insolvency or restructuring by providing a slew of structured finance techniques and ‘protections’ via use of a purported ‘true sale’ or revenues to a ‘bankruptcy remote’ entity … and a statutory lien on funds paid to the MFSC.”

However, investors should not actually believe the bonds could escape restructuring in a bankruptcy, MMA said. “Additional concerns related to the transaction’s durability … include the U.S government’s ability to manage/interfere with the affairs of its territories, its strained fiscal condition, exposure to significant climate-related hazard, and the size of the revenue stream pledged and related debt.”

Kroll Bond Ratings Agency rated the new bonds BBB. None of the other ratings agencies provided a rating.

After the sale, Kroll Senior Managing Director Bill Cox said, “The KBRA rating reflects the strong legal protections of the pledged U.S. government excise tax receipts which have been sold through a true sale by the USVI government to a bankruptcy remote special purpose entity for the benefit of bondholders.”

Last week CreditSights said the Kroll rating was too high.

“The statements last week by employees of CreditSights — a subsidiary of Fitch [Ratings], which itself was not asked to rate the bonds — demonstrated poor understanding of the securitization structure and the dynamics of the rum industry.”

Kroll does not rate other Virgin Islands government bonds.
Squire Patton Boggs said it was proud to have worked on the transaction since 2020. Karol Denniston and Pedro H. Hernandez lead the firm’s work.