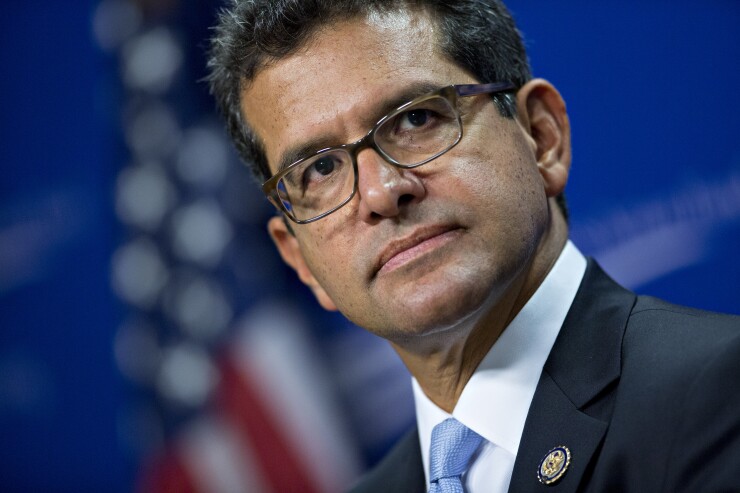 A bill to restore fiscal independence to Puerto Rico on an expedited pace was introduced in the House and stands a good chance of passing, analysts said.

The Territorial Relief Under Sustainable Transitions for Puerto Rico of 2022 bill would eliminate the Congressionally mandated Financial Oversight Board when Puerto Rico provides two consecutive balanced budgets to Congress. Under the Puerto Rico Oversight, Management, and Economic Stability Act, the commonwealth had to provide four such financial reports before being freed from oversight.

The budgets do not need to include provisions for debt service payments and the bill would also eliminate the requirement that Puerto Rico have access to credit markets.

“The Financial Oversight and Management Board represents a cardinal sin against the sovereignty and self-determination of Puerto Rico,” said Rep. Ritchie Torres, D-New York, who introduced the bill along with four others. “It is the single most egregious example of modern-day colonialism in Puerto Rico and must be disbanded.”

The bill, he said, offers the island “a path for the dissolution of the Oversight Board and return control and power to the island’s residents and government.”

The introduction of the bill, which will be followed by a hearing before summer, comes only weeks after the island announced the end to its bankruptcy.

“Now that Puerto Rico has embarked on a path toward resolving its bankruptcy, it is time to start talking about terminating the Financial Oversight and Management Board and returning control back into the hands of Puerto Rico’s elected government officials,” said Congressman Raúl Grijalva, D-Arizona, chair of the House Natural Resources Committee.

Gov. Pedro Pierluisi said the bill has his full support, adding it is “necessary to have a clear and agile process for the Oversight Board’s exit.”

“After putting an end to our central government’s bankruptcy process, it is time to begin the transition towards returning the public policy decision-making responsibilities back to Puerto Rico’s elected leaders who represent our people,” he said in a statement. “The time has come to look towards a future of progress and fiscal responsibility for Puerto Rico without the Board.”

The bill would terminate the Oversight Board no later than 90 days after certification of the two balanced budgets and specifies that any balanced budget prior to enactment of this bill should be taken into account.

The transition would force the Oversight Board to transfer all funds, assets and records to the Puerto Rico government and provide a copy of all records to Congress. The bill also allows the Puerto Rico legislature and governor to adopt a resolution, after certifying two balanced budgets, to initiate the transfer.

It would also force the transfer of all duties and responsibilities under Title III and Title IV, which grant the board’s restructuring negotiations, to the government after the board is terminated.

“This doesn’t look to be very granular in nature, but two rounds of budgets should be a pretty good indicator of things to come,” said John Hallacy, president of John Hallacy Consulting. “It has a reasonable chance of passing,” he added. “I don’t think it’s an outrageous proposal by any means.”

The restructuring plan reduced Puerto Rico’s bond debt from $33 billion to $7 billion and cuts the island’s overall debt obligations by around 75%.

This comes as mediation over the Puerto Rico Electric Power Authority is ongoing amid power struggles, both physical with outages that hit the island last week and the makeup of the parties that will be allowed at the negotiating table.

Bankruptcy Judge Laura Taylor Swain excluded the legislature from the list of participants. Last week, Swain said no one had contacted the court to challenge the proposed mediators and that she was going to go ahead with appointing the parties she had identified to participate in the mediation.

Puerto Rico Judge Laura Taylor Swain filed an order Friday afternoon saying the mediation will terminate on June 1 unless the mediation team choses to extend it until July 1.

Puerto Rico’s status as a U.S. territory ultimately gives Congress the power to step in when it wants.

“It’s still ultimately up to Congress, if they want to step in and do something,” Hallacy said.

But the bill is reigniting battles for complete independence from U.S. oversight.

“Shortening of the undemocratic governance of PROMESA is definitely welcome but ultimately what Congress really needs to do is empower the U.S. citizens of Puerto Rico to have a form of government where they can actually fully govern themselves,” said George Laws Garcia, executive director of the Puerto Rico Statehood Council. “The only possibility for really doing that is through admission as a U.S. state.”

“Unless Congress advances an effort to provide an equal playing field for Puerto Rico, for it to be able to develop its economy, ultimately, Puerto Rico is going to continue underperforming economically and risks the possibility of falling back into [another] fiscal debt crisis,” Garcia said.