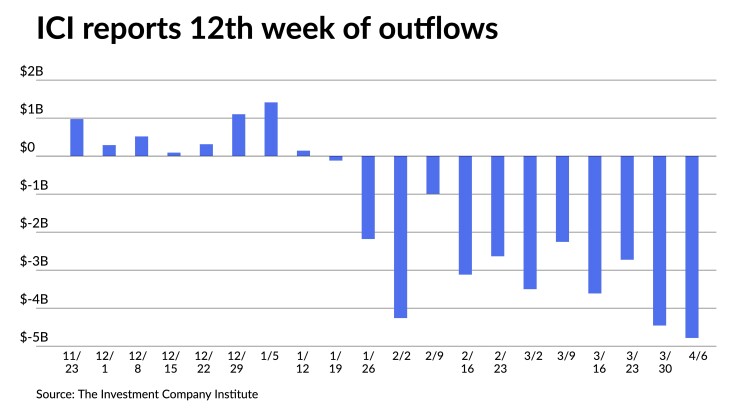 Municipals were mixed as U.S. Treasury yields fell for the second straight session, while the Investment Company Institute reported $4.8 billion of outflows, the highest since March 2020.

Exchange-traded funds saw inflows at $151 million versus $750 million of inflows the week prior.

The new higher-yield environment is a buying opportunity and investors should jump in now, according to BlackRock’s Peter Hayes, James Schwartz, and Sean Carney.

Difficult supply-and-demand dynamics have resulted in significant municipal underperformance since the beginning of the year, but “after a quarter of severe correction, we believe that higher absolute yields and attractive relative valuations provide a favorable entry point,” they said.

“While bouts of volatility could persist in the near-term, we think investors will ultimately benefit from entering early and taking advantage of the current muni availability ahead of the typically strong summer season.”

While higher-rated bonds and those with a shorter duration outperformed because they are less sensitive to interest rate changes, the market was strained in March by weak demand, increased secondary selling and more robust supply.

They said fundamentals in the municipal market are being bolstered by the strong U.S. economy. Several high-profile municipal credits have been upgraded due to strong revenue growth, improved financial management and increased fund balances.

“But despite strong fundamentals, rising rates and weak supply and demand dynamics have caused cheapening across the municipal market,” BlackRock strategists. “Investors should view this as an opportunity to source high-quality tax-exempt assets at better levels than the start of the year.”

Bids-wanted activity has been a large part of the secondary market story so far in 2022 with Tuesday’s total eclipsing $2 billion, the highest in more than two years and the 36th day above $1 billion. Bids-wanteds were elevated again Wednesday, but not as high as the market heads toward the holiday weekend.

But despite a bid list windfall, Tuesday saw a slight improvement in buy/sell momentum, Olsan said. Bloomberg’s tally of bids wanted in competition is causing the market to be held back once more. Municipal Securities Rulemaking Board data showed customer buying was more active after 2030, but less so at the shorter end of the curve, she said.

Among the outsized bid lists on any given day, she said several sellers of short calls and maturity dates are outpacing interested buyers, which is one of the causes for a larger decline inside 2027 maturity dates this year.

Olsan said the yield correction this year has brought the performance of municipal bonds in comparison to other asset classes into more focus.

For comparisons, Olsan looked at performance since 2020. She said tax-exempt municipals had the second-lowest return among the UST, corporate and mortgage-backed security sectors in 2020, save for beating mortgage-backed security by more than 100 basis points. A recovery in the second half of the year allowed a main muni index to recoup earlier losses during the COVID-led selloff.

Taxable munis surged in demand at the time issuance exploded to nearly $150 billion on strong refunding volume, she noted. The sector gained more than 11% in 2020 and Refinitiv MMD data showed the year ended with 20-year AA taxable munis yielding 2.59% against AA corporates trading at 2.39%.

Looking at 2021, tax-exempt munis gained 1.52%, about the same figure USTs lost over the year.

Now looking at this year, tax-exempt munis returns are poor by historical standards but not the worst of the group.

Olsan noted that a 7.32% loss is about 100 basis points outperformance to the U.S. Aggregate index.

Taxable munis “have succumbed to additional pressures against other taxable sectors, down over 11%,” she said.

“One aspect to the extreme rate backup in tax-exempts is the real yield opportunity for more traditional taxable-sector buyers,” she said.

A greater variety in couponing past 20 years adds to the allure, she said, pointing to low-AA and single-A state-level credit 4% structures that are now trading at discounts, which is an adjustment of more than 150 basis points.

Treasury yields fell but ended flat on the 20- and 30-year.

Inflation not going away
The producer price index, which came in above expectations, suggests price pressures will continue.

March producer prices came in higher than expected, he said, “underscoring momentum for a 50 bp hike at the May FOMC meeting.” The headline number’s 1.4% rise shows pressures “are not limited to impacts from the Russian invasion,” Compernolle said.

PPI will have to show “supply is realigning closer with demand” before consumer prices can demonstrate “meaningful disinflationary momentum,” he said.

And while the gains were “driven by sizable increases in food and energy prices,” Berenberg Capital Markets Chief Economist for the U.S. Americas and Asia Mickey Levy said, “continued disruptions to energy and agricultural commodity flows out of Russia and Ukraine paired with a jump in fertilizer costs could accentuate these price pressures, which are likely not yet fully reflected in producer prices.”

The pressures were broad based, Levy noted, with many goods and services seeing “significant” price increases in March. “Producer price pressures do not appear to be easing and will likely be exacerbated by COVID-19 associated lockdowns and factory closures in China,” he added.

While strong demand has allowed businesses to pass on increased costs, Levy said accelerating inflation, which in recent months has been driven by soaring food and energy prices, “has eroded consumer purchasing power and could crimp business pricing power.”

Despite the CPI report Tuesday, which many took as showing inflation was near or at its peak, Scott Ruesterholz, a portfolio manager at Insight Investment, said rents hold the key to inflation.

With rents being “sticky,” he expects CPI will be steady but above target for at least two years.

“With U.S. inflation at the highest levels since the 1980s, investors are worried about how long inflation will remain elevated,” Ruesterholz said. “We attempted to answer this question — not by looking at supply chains, energy prices or goods and services — but by focusing on what has historically been the most persistent and long-term driver of CPI: rental inflation.”

And there’s not much the Federal Reserve can do. “The Fed potentially has limited ability to return CPI to its target in the medium term.”

If consumers hold back on spending, he warned, “stagflation can set in.”