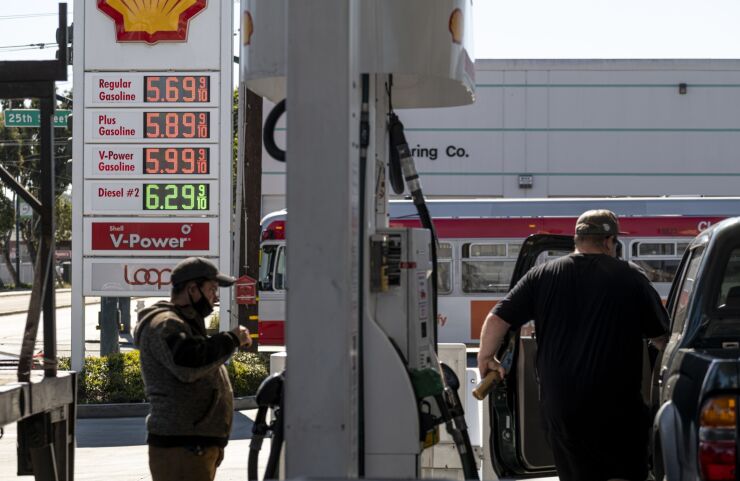 While lawmakers in California and other states are still debating the merits of cutting gas taxes amid soaring prices spurred by Russia’s war on Ukraine several East Coast states have already implemented gas tax holidays prompting ratings analysts to weigh in.

Moody’s Investors Service analysts said in a report Wednesday that the tax “holidays” are credit negative because they are more likely to constrain infrastructure funding and erode revenue pledged to bonds than to provide substantial taxpayer relief.

Temporary state gasoline tax suspensions, implemented recently by a few U.S. states, and under discussion by others, are unlikely to lead to rating changes on highway user tax-supported debt, S&P analysts wrote in a report released Tuesday.

Connecticut, Maryland and New York are the states with gas-tax supported bonds that have temporarily suspended collection of their gas taxes, according to the ratings agencies.

New York State enacted a suspension of the Metropolitan Commuter Transportation District sales tax, as well as the motor fuel tax imposed on gas and highway diesel, from June through December, which will apply to about 16 cents of the state’s 33-cent-per-gallon gas and 32-cent-per-gallon highway diesel tax surcharges outside the MCTD and 16.75 cents within the MCTD, S&P wrote.

Georgia also enacted a gas tax holiday that began March 18 and runs for two-and-a-half months, but Moody’s said the state has no debt supported by a state motor fuel tax pledge.

In the states that have enacted gas tax suspensions so far, Moody’s expects “minimal credit impact for highway revenue bonds, given the suspensions’ short durations, strong debt service coverage and the allocation of other revenue sources to debt service.”

The credit effects of tax changes will be determined primarily by the amount and duration of any fuel tax reductions or suspensions, preexisting debt service coverage available to absorb fuel tax revenue losses, and the portion of pledged revenue derived from fuel taxes, rather than other sources, Moody’s wrote. “Most state highway bonds have sufficient debt service coverage to withstand a 30% cut in motor fuel tax revenue, based on our analysis.”

“For states that do issue bonds backed by a specific fuel tax revenue pledge, tax holidays raise certain questions,” Moody’s wrote. “For example, does a fuel tax holiday need to be formally disclosed to investors? Connecticut did not file a separate EMMA disclosure document, although Maryland did.”

Moody’s, which rates $10 billion of Garvee debt, said those grant anticipation revenue bonds sold by state and local governments and repaid with federal transportation grants face less fuel tax suspension risk because of the federal government’s established practice of appropriating general fund money to the Highway Trust Fund to offset shortfalls. The proposed legislation would provide for such transfers.

Newsom had proposed $400 tax rebates for vehicle owners for up to two cars during his State of the State speech in March, but didn’t include the amounts of the proposed tax debates in the budget trailer bills.

“This is by design,” said H.D. Palmer, a Department of Finance spokesman. “The governor’s proposal remains $400 per eligible registered vehicle, which would cost $9 billion. The amounts weren’t included in the legislation, because that is something that has to be discussed and resolved with legislative leaders.”

The governor’s proposal to provide free rides on mass transit would cost the state about $750 million in incentive grants to local transit agencies to cover their farebox costs over the three month period, Palmer said.

“Those two are relief for income tax filers, while the governor’s focus is on vehicle owners who are paying more at the pump, because of the registered vehicle,” Palmer said.

Newsom’s proposal would also apply to motorcycles and electric vehicles but it wouldn’t apply to companies that own a fleet of cars.

“Some other states are providing for direct payments to offset consumers’ gasoline bills, an approach that relies on surplus funds and avoids disrupting the flow of revenue pledged to specific purposes,” Moody’s analysts wrote.

These are shaping up to be the best and worst luxury real estate markets for 2023
Crypto lender BlockFi files for Chapter 11 bankruptcy
Defying forecasts, crude oil prices have wiped out most of this year’s gains and could head lower
Artful Contemporary Enjoys A Quiet Haven Close To Las Vegas
SBF Was ‘Delusional,’ Will ‘Spend Time in Jail’ Says Galaxy’s Mike Novogratz — ‘He Needs to Be Prosecuted’