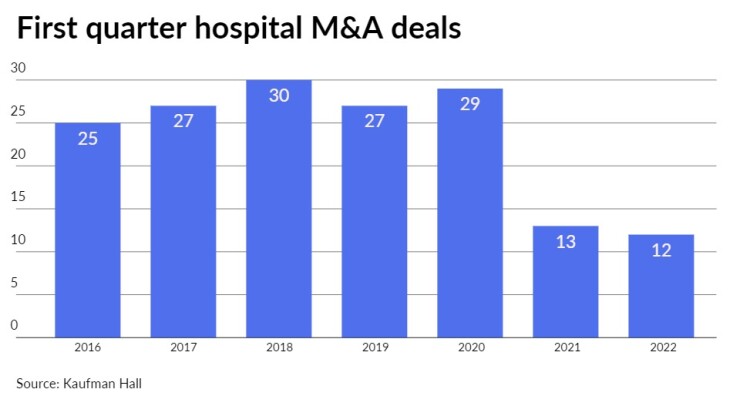 Merger and acquisition activity among not-for-profit and for-profit hospitals dropped off in the first quarter compared to the same period last year, according to Kaufman Hall.

The 12 announced transactions in the first quarter marked the lowest since 2016 when Kaufman Hall began tracking the activity, according to the Quarterly Mergers and Acquisitions Report the firm published April 7.

“The lack of Q1 transactions is consistent with the low level of activity its experts have observed throughout the pandemic,” Kaufman Hall said in the report. “The pandemic has affirmed the imperatives of scale and we expect that this quarter’s results will prove to be an anomaly as we (hopefully) move beyond the COVID-related distractions that health systems have faced over the past two years.”

“This trend may continue even as we observe a healthy pipeline of ongoing partnership discussions and affiliations that are in their formative periods,” Ponder said.

A notable change from previous quarters was the lack transactions that involve systems with revenues of at least $1 billion. Four of the 12 deals involved hospitals with average revenue of less than $100 million. Total revenues involved in the transactions reached just $2.95 billion compared to $48.8 billion in 2021, Kaufman Hall said.

Ponder saw only one transaction in the not-for-profit space involved a hospital system with more than $500 million which was the separation of Hoag Hospital in Orange County, California, from Providence St. Joseph Health.

Both Ponder and Kaufman Hall anticipate hospital partnership and alignment trends related to specific services or on operations to continue with the pandemic illustrating the benefits.

“Partnerships will become increasingly important as a variety of organizations compete for control of healthcare’s front door and consumers’ medical spend at the local, regional, and national levels,” Kaufman Hall said.

Heightened anti-trust scrutiny announced last year by President Biden also could impact the pace of transactions for the remainder of the year.

The Federal Trade Commission is issuing letters of non-review to potential merger applications that are nearing the end of the statutory waiting period as it makes its way through a backlog.

“The letters note that the commission’s investigation remains open and ongoing and further states the merging parties consummate the merger at their own risk,” Ponder said. “The ambiguity in regulatory approvals and the challenges and expenses of a post-closing injunction are expected to slow the pace of announced transactions in the current regulatory environment.”