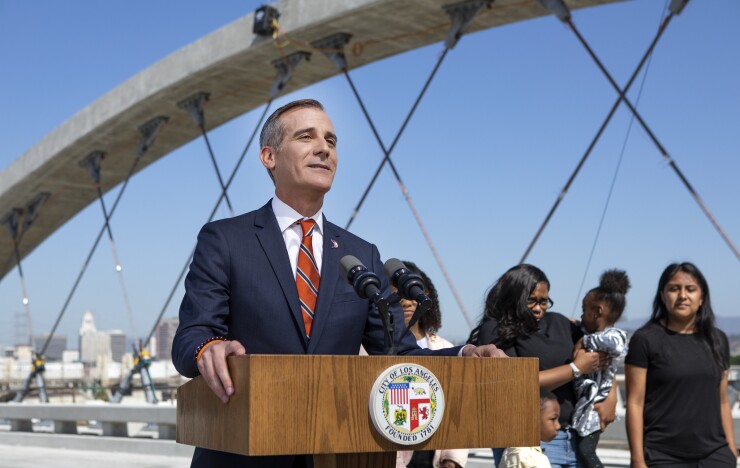 Los Angeles Mayor Eric Garcetti emphasized climate change, infrastructure and the homelessness crisis in his final State of the City speech as he foreshadowed the 2022-23 budget he releases this week.

His choice of venue for his speech Thursday, the nearly complete Sixth Street Viaduct replacement project, underscored the infrastructure theme.

Garcetti said he plans to deliver the City Council a budget “that is stronger than ever, has an infrastructure program unequaled in America, and a pathway to house our people and save our planet with the urgency that this moment demands.”

He pointed to the $15 billion in capital programs underway at Los Angeles International Airport to bring a new concourse and state-of-the-art cargo facility and the $8 billion Operation Next program at the Los Angeles Department of Water and Power that expands the Hyperion Treatment Plant to increase the use of recycled water.

Garcetti is required by city charter to deliver his budget proposal to the City Council by Wednesday. The council then has until June 1 to make changes and return the budget to the mayor by June 1.

City leaders approved an $11.1 billion budget in July 2021 for the current fiscal year that was bolstered by American Rescue Plan Act funds. That budget included $1 billion in spending for programs aimed at the homelessness crisis.

The mayor spent a significant amount of his speech highlighting what he sees as the successes of efforts to provide homes for the unhoused.

The city faced criticism in a report released in February by City Controller Ron Galperin that found per unit costs had soared to $870,000 on one project in his audit of Proposition HHH, a $1.2 billion bond program approved by voters in 2016 with the aim of building 10,000 units.

The city counted more than 41,000 people living on the streets during its 2020 tally, the most recent figures available.

The program is still on track to reach 10,000 units, Garcetti said, though only 1,200 units are constructed and occupied.

Garcetti said his efforts toward the city’s Green New Deal would create a $21 million Climate Equity Fund focused on “mitigation and resilience efforts in the low-income neighborhoods that bear a disproportionate amount of environmental harm.”

The city’s environmental programs have already resulted in the city using 54% less imported water, Garcetti said. LADWP’s Hyperion Water Project will enable the city to treat billions of gallons of wastewater for drinking and irrigation, “and add to our local supply the equivalent of two L.A. Aqueducts.”

Garcetti said the city’s Department of Water and Power has been weaning itself off coal; and electricity generation will be completely coal free by the end of 2025. Just over a decade ago, 40% of city power was produced by burning coal.

Garcetti was expected to have vacated the mayor’s office by now, after President Joe Biden appointed him last year to serve as an ambassador to India.

His confirmation has been stalled amid sexual harassment charges against Rick Jacobs, Garcetti’s former deputy chief of staff. The mayor denied he had knowledge of Jacobs’ alleged actions.

But a confirmation vote is blocked by holds placed by two Republican senators from Iowa.

As he looked ahead to the end of a tenure that began in 2013, Garcetti said he will be “rooting for” whoever the next mayor is.

“Complete those 12,000 supportive housing units and do 12,000 more in half the time,” Garcetti said. “Throw the best Olympic Games this world has ever seen and leave behind a legacy of opportunity.”

And, “don’t forget to balance the budget, to build that reserve and to watch your bond rating,” he said.