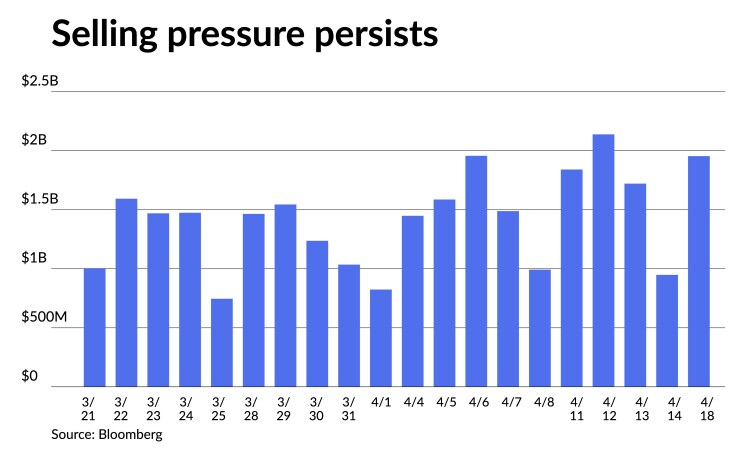 Municipals sold off Tuesday, with triple-A benchmarks seeing cuts up to 11 basis points and the 30-year topping 3% on some scales. U.S. Treasuries were weaker, experiencing double-digit cuts on the short end, and equities rallied.

The significant cheapening of municipals in recent weeks continues to create headwinds for the overall tax-exempt market on a daily basis, according to a New York trader on Tuesday.

He said traders and investors are being challenged by the current market technicals, with the 30-year triple-A municipal bond closing at close to or above 3% on Tuesday.

“The market has been very tough, with prices going down five to 10 basis points a day for the last week,” he said. “Prices are significantly cheaper than they were a month ago, two weeks ago, a week ago.”

There is “severe” customer selling, with a flood of bids-wanted lists on a daily basis, according to the trader, who described the situation as “hard to keep up.” So far this year, there have been 38 trading sessions where bids-wanteds topped $1 billion.

The tone of the market is compounded by the daily outflows from mutual funds as well as the pressure with the backdrop of the Federal Reserve Board continuing to raise rates.

The Fed, he said, might have to “do more faster given the pace of inflation,” he said. “That is not helping the situation.”

The climate has put added pressure on the municipal and Treasuries markets, he said.

“It’s tough to trade in here, and I don’t see that changing in the short term,” the trader said.

Municipals have cheapened up to 100% of Treasuries on the long end and that is traditionally what brings in interest from crossover buyers and investors more interested in municipals.

However, this time, it might be a double-edged sword.

“With the Fed outlook being negative I’m not so sure those people will be coming into municipals,” he said.

To make matters worse, the market doesn’t have a whole lot of supply this week or next, he noted.

Based on the sector’s previous April performance, as well as the relatively small amount of reinvestment money seeking for a new home, investors banking on a speedy rebound in munis may continue to be out of luck, said Eric Kazatsky, head of municipal strategy at Bloomberg Intelligence.

This week’s new-issue calendar is expected to be around $4.8 billion, which is much lower than the normal weekly sales volume. The ongoing cuts to the triple-A municipal scale may be pushing some issuers to wait on the sidelines for the time being, which is not unusual for a calendar after a holiday-shortened week, he said. Bond Buyer 30-day supply sits at $13.91 billion.

CreditSights strategists Pat Luby and John Ceffalio said as municipal bond yields climbed last week, spreads for the ICE municipal credit indices widened. The single-A, triple-B, and high-yield indexes all widened by three basis points, while the double-A Index to widened by two basis points to +5, they noted in a Monday report.

A detailed examination of spread changes by tenor and quality reveals wide differences.

“While U.S. Treasury moves were muted to start the new week, muni prices were cut as much as 6 basis points in various spots on the curve, narrowing the margin of outperformance,” he said. “Still, over the past week, munis were the winners in almost every tenor of the curve except for the front end, where the pace of muni rate increases almost doubled that of Treasuries.”

Along with rising rates, the market’s spread should widen, Kazatsky said. April’s spread widening isn’t reason for concern based on option adjusted spreads for the Bloomberg Municipal Bond Index, but he said a more granular picture of states and sectors, on the other hand, reveals areas of weaker credit.

“Double-A and single-A revenue bonds along the curve 10 years and out have credit spreads that are three to four standard deviations higher than their one-year averages,” he said. “This trend also holds true for many state-level credit spreads, with Pennsylvania appearing to fare the worst. Its spreads of 57 basis points compare with the one-year average of 20 basis points.”

Is 75 bp on the table?
The Federal Reserve has vowed to aggressively attack inflation with rate hikes and balance sheet reduction, but Federal Reserve Bank of St. Louis President James Bullard initiated a new conversation by saying the Fed should consider a 75 basis point increase at its upcoming meeting.

Although Bullard said a 75 basis point hike wasn’t his “base case,” it grabbed attention since a move up like that hasn’t happened in nearly three decades, said Craig Erlam, senior market analyst, UK & EMEA, at OANDA.

“Still, the prospect of even more aggressive tightening can’t sit well with investors, despite the resilience they’ve shown in recent months,” he said.

“It’s hard not to fixate” on Bullard’s comments, said Sebastien Galy, senior macro strategist at Nordea Asset Management. “For good reasons, the Federal Reserve is still trying to gain control of the inflation narrative on Wall Street but far more importantly on Main Street,” he said. “It is currently not succeeding.”

For the Fed to deliver such a hike, Galy said, “without sending equities in a vicious negative feedback loop,” top officials will have to talk up “the odds of a 75 bp rate hike in advance.”

But, the Fed must also make sure not to tamp out economic growth, he added. “The Fed’s problem is that real interest rates are negative on part of the curve (still easing).”

It is “very hard to forecast” the value balance-sheet reduction, Galy said, calling “strange” the Fed’s assumption that it will be “worth 0.25% in interest rates by year-end.”

While Bullard is a hawk, and therefore expected to want larger hikes, Phil Rasori, COO at Mortgage Capital Trading (MCT), said, “his comments likely mean that other hawks are on the same page when it comes to the central bank moving quickly to raise interest rates.”

And while he tempered his comment by saying it wasn’t his base case, Rasori said, “expectations are for multiple half-point hikes as the Fed looks to” bring rates up to a neutral level, which estimates say is “around 2.4%.” To halt inflation, he said, “the FOMC may need to get to around 3.5% this year,” while also downsizing its balance sheet.

And while a 75 basis point increase should not be dismissed, Andrew Hiesinger, founder and CEO of Quant Data, said, “my expectations are set on them being as risk-averse as possible without losing any credibility in the fight against inflation, which would point towards a 50-basis point move instead of a more aggressive 75-point move.”

At the latest meeting, he noted, the Fed chose a smaller rate hike (25 bp instead of the 50 bp that they felt was warranted) because of Russia’s invasion of Ukraine. But the fight against inflation continues with an assessment of “whether they are behind or ahead of inflation, which decides how aggressive they need to be moving forward.”

The market has a half-point hike priced in, Hiesinger noted. “The Fed needs to be as responsive as it can to the hot inflation, but it needs to be done carefully to avoid causing further disarray to the financial markets,” Hiesinger added. “I mainly think that the risk lies in them being too aggressive, it is a commonly held belief amongst the investing community that the Fed is behind the curve, and because of that, they’re expecting a more robust response.”

And while Fed officials have discussed the likelihood of a half-point hike on May 4, and economic data support the move, Wilmington Trust Chief Investment Officer Tony Roth and Chief Economist Luke Tilley, noted no Fed speakers “have argued against it.”

And the increases will continue, they said. “The Fed’s median projection (from the March 16 meeting) shows a total of 7 hikes of 25 bps in 2022 which would bring the rate to 1.9%. The market was pricing a year-end rate of 2.5%,” Roth and Tilley noted. “To boot, the most hawkish Fed officials have said they want to ‘get back to neutral soon’ or even ‘by the end of this year.’”

But hikes are not set in stone. “We see a growing chance that inflation and growth will slow enough to induce the Fed to slow the rate hike path later in the year,” they said. “Economic activity, inflation-adjusted spending on goods, wages, core inflation, money supply growth, shipping costs, housing indicators, and rents have all slowed or declined. If inflation slows more than anticipated, the Fed would re-evaluate, and it would not be the first time.”

In data released Tuesday, housing starts and building permits both rose more than expected in March, with starts now at levels not seen since June 2006. “Record-high home prices and lack of housing supply are cooling demand from homebuyers as mortgage rates tick up,” said Grant Thornton Economist Yelena Maleyev.

And with the Fed in a hiking cycles, she noted, “mortgage rates will continue to increase this year as more potential home buyers are priced out of the housing market and continue to rent.”

“Home prices are up 10% to 30% from pre-pandemic levels already,” he said, and using the average home price, “the rise in mortgage rates makes the monthly mortgage payments for the same property more than 60% higher than it was a couple years ago.”

When the Fed starts reducing its holding of mortgage-backed bonds, mortgage rates will climb more, Doty said. “Ironically, the initial impact from the Fed’s attempt to combat inflation is everything gets more expensive.”

But there’s good news. “We think the worst might be behind us, especially for shorter term bonds.”