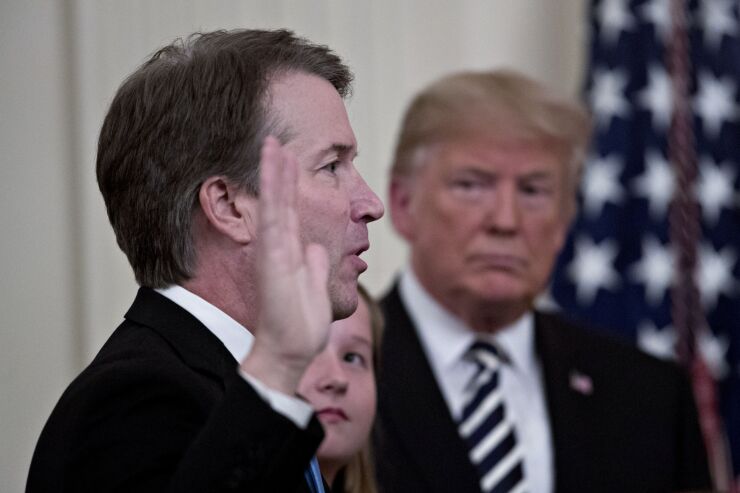 The Supreme Court released its 8-1 decision in the United States v. Vaello Madero case on Thursday. Justice Sonia Sotomayor wrote the a dissent.

The SSI program provides financial assistance to disabled adults in the 50 states and the Northern Mariana Islands. Jose Luis Vaello Madero was trying to extend the program to those living in Puerto Rico and other territories. Some analysts said if Puerto Rico gained this, it would have contributed to economic growth. .

In his majority opinion, Associate Justice Brett Kavanaugh pointed to the Territory Clause of the U.S. Constitution that Congress may “make all needful rules and regulations respecting the Territory … belonging to the United States.”

Kavanaugh focused on federal powers over taxes and benefits in the territories and how they were linked. He noted that Puerto Rico residents generally do not pay federal income taxes. The lack of coverage of some federal programs in the territories parallels this, he said.

Kavanaugh said if the court approved Vaello Madero’s position that SSI should be extended to island residents, then the same argument could be made for many other federal benefits. Also, residents of the 50 states could insist that federal taxes be imposed on territorial residents. But the Constitution gives wide leeway to Congress on how it wishes to treat the territories for benefits and taxes, he said.

“The Supreme Court decision denying the most vulnerable American citizens living in Puerto Rico access to the Supplemental Security Income (SSI) is contrary to the basic tenets of our nation,” said Carmen Feliciano, executive director of the Puerto Rico Federal Affairs Administration. “It constitutes geographic discrimination and is a very clear example of how Puerto Ricans continue to be treated as second-class citizens in the 21st Century.” Feliciano works in the government of Gov. Pedro Pierluisi.

U.S. Rep. Nydia Velázquez, D-NY, said the decision is “a demoralizing setback for the people of Puerto Rico who deserve the same access to federal benefits as those living in the mainland United States.”

“We cannot forget that Puerto Rico was colonized by the United States over a century ago and today’s decision is yet another in a long and brutal effort by the U.S. to treat Puerto Ricans as second-class citizens,” she said.

Sadler Family Professor of Constitutional Law at NYU School of Law Richard Pildes said, “The decision maintains the status quo and is a predictable consequence of existing doctrine, under which disabled adults in Puerto Rico receive far less in income benefits than comparable adults who reside on the mainland of the United States.”

Hunter College Center for Puerto Rico Studies Research Associate Carlos Vargas-Ramos said, “It is interesting … that the court, so deferential to precedence in other circumstances, is unwilling to explicitly deploy the ultimate precedence underscoring the overwhelming majority of its decision on Puerto Rico: the Insular Cases. Justice Gorsuch, [Justice Clarence] Thomas, and, separately, Sotomayor hint at this glaring omission. But the court is certainly unwilling to reveal the racist legal basis for underscoring the differential treatment of Puerto Rico.”

The decision was “not surprising but it is certainly disappointing,” said Center for a New Economy Policy Director Sergio Marxuach.

He noted the Biden administration could have ordered the Department of Justice to withdraw its appeal but it decided not to.

“In addition, Kavanaugh’s analysis, in trying to avoid the controversial issue of the Insular Cases, is ‘utterly irrational’ as Justice Sotomayor states in her dissent,” he said.

“Stating that it is rational for Congress to discriminate against Puerto Rico because residents of the island by and large do not pay federal incomes taxes makes no sense in the context of this case because the beneficiaries of SSI, by definition, are aged, disabled, or blind and thus are unable to work or pay federal income taxes, whether they live in California, New York, or Montana,” Marxuach said. “All in all, a shameful day for the court, a bad day for the Biden administration, and most important of all a terrible day for the blind, aged, and disabled residents of Puerto Rico.”