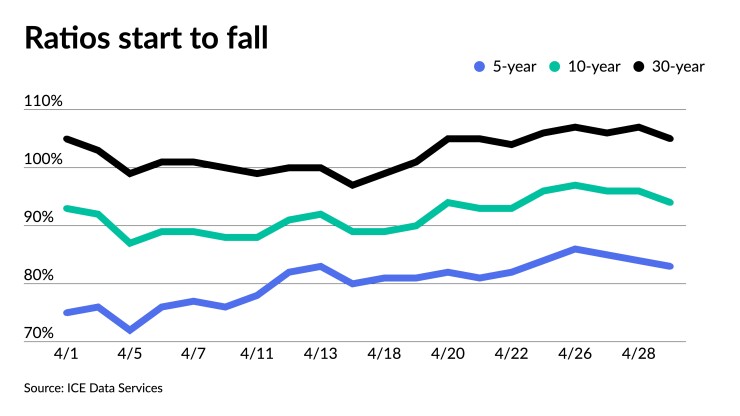 Municipals were mixed Friday, outperforming larger losses in U.S. Treasury ahead of the Federal Open Market Committee meeting next week where the Fed is expected to implement another rate hike. Equities sold off led by tech stocks.

Triple-A benchmarks were cut up to two basis points, depending on the scale, while UST yields rose seven to 10 basis points with larger losses 10 years and in.

Investors will be greeted Monday with a steep drop in supply, with the new-issue calendar reaching $4.583 billion — less than half of this week’s supply — with $3.025 billion of negotiated deals and $1.558 billion of competitive loans.

The primary calendar is led by $945 million of payroll mobility tax senior lien bonds from the Triborough Bridge and Tunnel Authority. Presbyterian Healthcare Services, New Mexico, will come in at $341 million of taxable corporate CUSIP bonds.

Broward County School District, Florida is expected to sell $263 million to lead the competitive calendar, along with Santa Clara County, California with $238 million and Seattle, Washington with $151 million.

“Still, compared to last week, the underlying tone of the market suggests that a reversal should be around the corner as we leave April behind,” they said. “Crossover buying, large retail investor participation, low secondary dealer inventory levels and tax loss swap activity all acted to revive the market’s dynamics.”

BofA strategists said muni-UST ratios have been pushed to recent peaks across the curve due to “unchanged muni yields, combined with declining Treasury yields.”

They said, “high ratios for the short end of the curve are particularly notable as these ratios have never been so high in modern history during a Fed tightening cycle.”

“Indeed, high front-end ratios are normally the case during crisis time and, thus, Fed easing cycles,” they noted. “So, if front-end Treasuries price the Fed tightening path correctly, then front-end munis are too cheap based on these ratios.”

Higher UST rates have led to underperformance for the majority of U.S. fixed income asset classes, munis included, on a total return basis, according to Barclays PLC.

Barclays strategists Mikhail Foux, Clare Pickering and Mayur Patel said the Bloomberg Municipal Bond Index and the Bloomberg Municipal High Yield Index “were among the worst-performing U.S. fixed income indices in the first quarter and posted some of the worst results since their inception.” They noted the underperformance “has continued well into April, with the indices generating total returns of -8.7% and -9.7%, respectively.”

They said, “50% of the high yield index is comprised of maturities longer than 22 years.” Barclays strategists said nearly two-thirds of the bonds “within the high-yield muni index have maturities greater than 20 [years] compared with one-third for the muni investment-grade index.”

Therefore, it makes sense to compare performance on a maturity matched basis, which shows the high-yield muni index has actually outperformed the muni investment-grade index year-to-date, with the high-yield index outperforming across all tenors.

FOMC preview
Friday’s data showed consumers worry about inflation, while the labor market continues tightening ahead of the May 3-4 Federal Open Market Committee meeting, offering the panel no reason to deter from raising the fed funds target 50 basis points and announcinge a balance sheet reduction plan.

With labor supply increasing, the rise in the index suggests “cost pressures from the tight labor market will not be easily stomped out,” they said. “The FOMC is likely to stay on an increasingly hawkish path as a result, given labor costs represent a more persistent threat to the inflation outlook.”

Although it will take a recession to quickly erase inflation, JPMorgan Funds Chief Global Strategist David Kelly and market insights research analyst Stephanie Aliaga said, without a downturn, inflation “should gradually drift down.”

Assuming that is the base case, they said, “the Federal Reserve should have the patience to let it do so rather than try to speed its decline at the risk of tipping the economy into recession. Ultimately, we think this is what the Fed will do and so, after some pretty hawkish signals in recent months, their tone could turn a little softer as the year goes on.”

Investors shouldn’t panic, Kelly and Aliaga said, but should “check the valuation of assets more carefully as the U.S. and global economies transition to more normal economic growth but somewhat higher inflation that was seen in the decade before the pandemic.”

In addition to a half-point hike at this meeting, Chiavarone expects similar hikes at the ensuing two meetings. “This implies a target fed funds range as high as 1.75-2.00% by the end of July.”

And the chances of “a dovish turn, such as a lower-than-expected rate increase and/or guidance that suggests the pace and magnitude of future rate increases will moderate,” he said, are “very low.”

He urges investors to “think defensively and reduce risk.”

While the high inflation this cycle makes “a soft landing less likely,” John Hancock Investment Management Co-Chief Investment Strategist Matt Miskin said, “if inflation can slow or even decelerate on its own,” a soft landing is possible.

Should that come to fruition, Treasury yield would hold steady or dip, “because the Fed won’t be as hawkish as the bond market is pricing in,” he said. “In a hard landing, the Fed would likely be cutting rates amidst the recession they create.”

The outcome could be evident by yearend, Miskin said.

But how much will the Fed need to raise rates to cut off inflation? “We think Fed rate hikes will need to slow U.S. growth below potential GDP growth, estimated around 1.8%, for some time and also increase the U.S. unemployment rate a bit from here if they are to make significant headway in reducing inflationary pressures,” Scott Anderson, chief economist at Bank of the West, said.

Futures suggest the Fed will lift the rate target by a half point at its May and June meetings, he said, “with the door wide-open for the possibility for other 50 basis point moves at July and September FOMC meetings too.”

This change in expectations “is putting renewed upward pressure on nominal and real Treasury yields across the maturity spectrum,” which, Anderson said, is “in turn is pushing longer-term Treasury spreads into negative territory” as “investors brace for a possible hard landing.”

The futures market now sees the fed funds rate around 2.8% at the end of 2022, he said, “a whopping 90 basis points above the FOMC median projection from the dot-plot published only one month ago, and above the FOMC’s own definition of a neutral policy rate of 2.4%.”

If rates go that high, Anderson said, it would be “well into tightening territory.”

Right now, he added, the fed funds rate “is only 0.32% and if it reaches 2.8% by the end of December it would be equivalent to 248 basis points of Fed tightening in just eight months. This is a much faster start to a tightening path than the Fed has pursued in many tightening cycles, since at least 1988.”

Throw in quantitative tightening, “this will fast become a toxic monetary environment and a potentially deadly combo for this equity bull market and the economic expansion itself as we look into 2023.”

But the Fed might be happy if inflation falls to 3% to 4%, said Mickey Levy, Berenberg Capital Markets’ chief economist for the U.S. Americas and Asia, and a member of the Shadow Open Market Committee. Speaking at a Manhattan Institute web event Friday, Levy said, “I don’t think they have any intention of pushing inflation down to 2%.”

Since the Fed “waited too long to start policy normalization,” Peter Ireland, an economics professor at Boston College and member of the Shadow Open Market Committee, said, “they have to move faster, increasing the funds rate at every meeting and sometimes by 50 basis points.”

Given that monetary policy works with a lag, starting late and moving aggressively, “makes the Fed’s task more difficult.” Throw in balance sheet reduction and a soft landing becomes more “complicated,” and it’s “harder to judge just how much tightening is happening all at once.”

But markets are “uneasy about the extent of the overall tightening path and the balance between policy rate hikes and the scale of the intended QT,” said Solomon Tadesse, head of North-American equity quant research at Societe Generale.

“From a quant perspective, our latest analysis suggests that the current Fed monetary policy cycle could peak at a mix of a moderate policy rate (FFR) hike of about 0.75-1pp and an additional implicit monetary contraction from QT of about 220bp which could be accomplished through asset run offs of as much as $1.8tn in long-term asset holdings of the Fed balance sheet,” he said.

Every $100 billion rolled off the Fed’s balance sheet, Tadesse estimated, would initially be worth 12 basis points of tightening, “with higher impacts expected as the Fed balance sheet shrinks further, draining system-wide liquidity.”