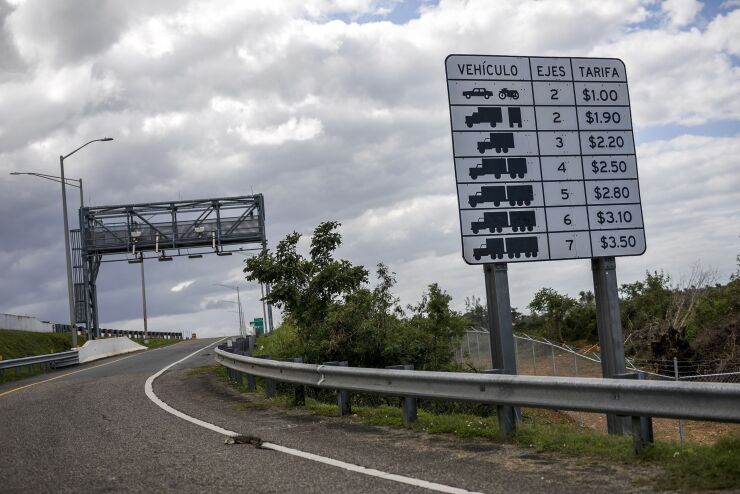 The Puerto Rico Oversight Board submitted a proposed Plan of Adjustment for the Puerto Rico Highways and Transportation Authority and proposed a confirmation hearing for it to be held in mid-September.

The board submitted the proposed plan, proposed Disclosure Statement, and three other motions concerning the legal processes on the road to confirmation on Monday in the United States District Court for Puerto Rico, which is handling all the Puerto Rico government bankruptcies.

Assured Guaranty and National Public Finance Guarantee had reached most of the terms of the plan in an HTA/Convention Center District Authority Plan Support Agreement signed in May 2021.

According to the terms of the Plan of Adjustment holders of $4.3 billion of HTA bonds will receive $1.2 billion of new bonds with 5% coupons and $389 million of cash. This is a cut of about 72%.

About $1.2 billion of the original par value is uninsured and the rest is insured by Assured Guaranty, National Public Finance Guarantee, Financial Guarantee Insurance Corp., and Ambac Assurance.

In the proposed Plan of Adjustment holders of the HTA 68 bonds would receive 100% recovery in new bonds and cash, however, the interest rate may be lowered. As of July 2016, the average interest rate on these bonds was 5.34%. Holders of the HTA 98 senior bond claims would get 22% in new bonds and cash. Those who hold HTA 98 subordinate bonds would get neither cash nor bonds but would be given a Contingent Value Instrument that would pay depending on performance of the island’s sales and use tax relative to fiscal plan forecasts.

There is $104 million in Moscoso Bridge bonds that have not defaulted and would continue to pay in full until maturity in fiscal 2023.

Unsecured claims of $265 million would be paid $25 million in cash.

The Plan of Adjustment includes a loan by Puerto Rico’s central government of $314 million to the HTA to facilitate the cash payments required by the plan, to be repaid over 30 years at a 2.5% interest.

“The plan, along with HTA’s fiscal plan, creates a solid financial foundation to ensure repair, maintenance, and future investment to ensure the mobility of residents and allow businesses to move goods efficiently,” said Board Chairman David Skeel.

The plan also settles $2.2 billion of loans held by Puerto Rico’s Debt Recovery Authority, the successor to the Commonwealth’s Government Development Bank. The DRA receives no cash but is granted a Contingent Value Instrument.

While the terms of the HTA bond restructuring were largely set in the central government’s Plan of Adjustment approved in January, HTA bondholders did not get cash, bonds, or CVIs when that plan was executed in March. Further conditions had to be met including the court approval of the Plan of Adjustment.