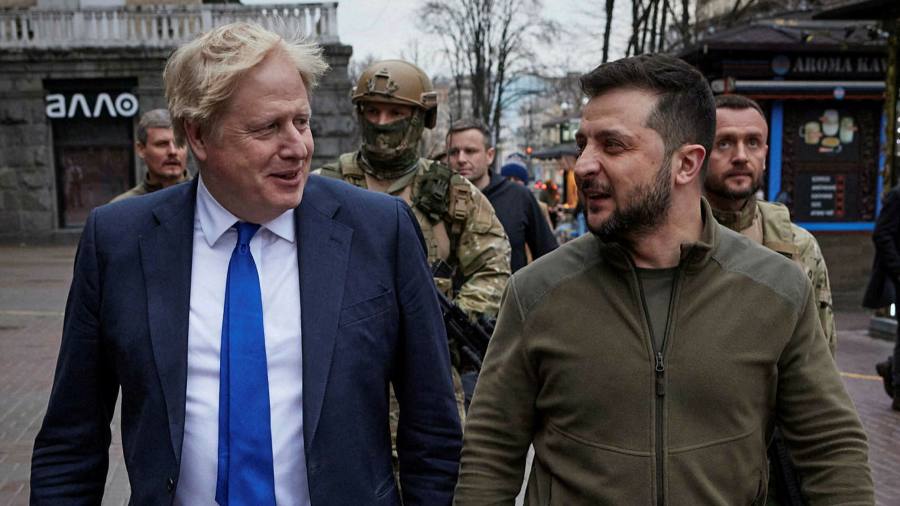 The UK is to commit another £300mn of military aid to Ukraine, Downing Street announced on Monday, as Boris Johnson, prime minister, prepared to become the first western leader to address its parliament since Russia’s invasion.

Johnson will make a speech to the Verkhovna Rada on Tuesday via video link, and is due to say Ukraine’s defence against Russia’s aggression has been the country’s “finest hour”, echoing language used by Winston Churchill during the Blitz in 1940.

But the UK’s latest military support for Ukraine comes amid fresh evidence of tensions in Johnson’s cabinet over levels of British defence spending.

Downing Street declined to say how much the UK has committed to Ukraine in defence spending since Russia invaded in late February. Defence secretary Ben Wallace told the House of Commons last week that the government had given £200mn of equipment.

Johnson will on Tuesday announce a £300mn package of “defensive military aid” for Ukraine including electronic warfare equipment, a counter battery radar system, GPS jamming kit and thousands of night vision devices, according to Downing Street.

US president Joe Biden last week said he would seek lawmakers’ approval for a $33bn package of assistance for Ukraine including more than $20bn of military aid.

Johnson will highlight the reopening of the British embassy in Kyiv and say the UK is “proud to be among Ukraine’s friends” when he addresses parliamentarians there.

“This is Ukraine’s finest hour, an epic chapter in your national story that will be remembered and recounted for generations to come,” Johnson will say.

It transpired on Monday that Wallace warned chancellor Rishi Sunak earlier this year that the UK risked falling short of its Nato commitment to spend more than 2 per cent of gross domestic product on defence by 2025.

Wallace warned Britain could fall short of the pledge because of the expense of sending military kit to Ukraine and inflation, according to The Sun newspaper.

A spokesperson for Sunak said: “This Conservative government has provided the largest increase in defence spending since the Cold War.”

The chancellor last year increased the Ministry of Defence budget by £24bn over four years.

Wallace’s spokesperson did not respond to a request for comment.

Tobias Ellwood, Conservative chair of the defence committee, said the time had come for the UK to increase defence spending to 3 per cent of GDP in line with some other Nato states.