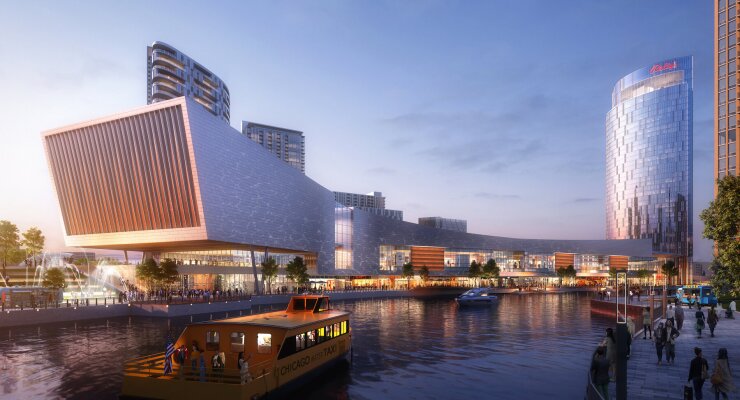 Chicago Mayor Lori Lightfoot chose Bally’s Corporation from the three short-listed candidates to hold the city’s first casino license, with the promise of a $40 million upfront payment and then a $200 million annual tax jackpot.

The selection of the Bally’s $1.7 billion casino and resort development proposal marks a milestone in the city’s decades-long effort to launch casino gambling to secure a new source of revenue and halt the loss of gambling dollars to casinos in bordering states. The city will likely spotlight the project when it hosts market participants at its annual investors’ conference which is expected to take place over the summer.

“Following significant analyses and community input on all aspects of our three finalists for Chicago’s casino license, the selection committee and I have chosen Bally’s to move forward in the development of the City’s first integrated casino resort,” Lightfoot said at a news conference Thursday. “We are confident that Bally’s Tribune Publishing Center development will shore up the city’s pension funds, create thousands of good-paying jobs, and lead to a bright financial future for our city.”

State legislation requires that the revenue generated by the privately owned casino go to fund the city’s police and firefighter pensions. The new revenue, will in turn, relieve pressure on the city’s corporate fund to cover contributions that are now on an actuarially based payment track to bring up abysmally low funding levels.

Bally’s permanent site is on a portion of the Tribune Publishing Center just northwest of downtown. It calls for a casino with 3,400 slots and 170 table games, a 3,000-seat theater, 500-room hotel, and other amenities with 3,000 construction jobs and 3,000 permanent jobs expected. A temporary casino will be housed in the Medinah Temple in the north Loop while the permanent casino is developed.

The city expects an upfront payment of $40 million that would benefit the 2023 budget with an additional $4 million then expected annually under a host community agreement. “Bally’s has also provided the highest minimum capital commitment to the project, and is the only submitting operator that did not have a competing casino in the Chicagoland region,” the city said in a statement.

The city anticipates $200 million in annual tax revenue with the state receiving another $200 million. The state approved the city’s first license in 2019 as part of a broader gambling expansion package with the state’s share going to help fund its $45 billion capital budget.

State lawmakers agreed to amend the casino license legislation in 2020 to provide more incentives to attract developers and the city last year launched a competitive bidding process. Five proposals were received and the administration in March narrowed the list down to three.

“The city believes that the casino project will meaningfully support Chicago’s tourism industry, finances, job growth, and economic development in addition to enhancing property values in the surrounding area,” the city said in a statement.

Bally’s has an agreement with organized labor on hiring which was considered central to securing City Council approval. Lightfoot still must win over a majority of the-50 member council and public sentiment, although Alderman Walter Burnett whose ward includes the site, supports the project.

Some residents have voiced opposition over a range of issues from increased traffic to potential crime and some council members have decried the selection process, feeling shut out. The Illinois Gaming Board also must sign off on the pick. The council’s special casino committee will hold a subject hearing Monday to hear more details on the plan.

The city draws about $1.4 billion from property taxes and $329 million from its general fund to help cover a $2.3 billion contribution this year to its police, fire, municipal and laborers funds after fully completing a multi-year ramp to an actuarially based contribution.

“It would be very difficult for the city to get to structural balance” without the future casino funding, Bennett said in response to a question about the fiscal impact if casino plans are delayed or dropped. The city could be forced to return to using “one-time measures” after having shed them, which helped stabilize the ratings “amidst a pandemic.”

Difficult choices would loom as soon as 2023 and “the only really viable alternative source for the city of this magnitude would have to be property taxes,” Bennett told council members who face re-election along with Lightfoot in 2023.

The city’s past reliance on one-shots — like scoop-and-toss restructuring and borrowing for judgment settlements — helped dig the city a structural hole. The Lightfoot administration originally targeted 2022 for structural balance but was pushed off track by one year by the COVID-19 pandemic. Rating agencies expect the city to meet the 2023 goal, so the city’s general obligation ratings could be strained if it falls short.

The city is rated BBB-minus, A, Ba1, and BBB-plus by Fitch Ratings, Kroll Bond Rating Agency, Moody’s Investors Service, and S&P Global Ratings, respectively. The police fund makes up $12.1 billion of the city’s $33 billion of net pension liabilities for 2020 and fire makes up $5.6 billion. The police fund is 22.2% funded and the fire fund is at 19%. The city’s collective funded ratio of its four funds is 23.5%.