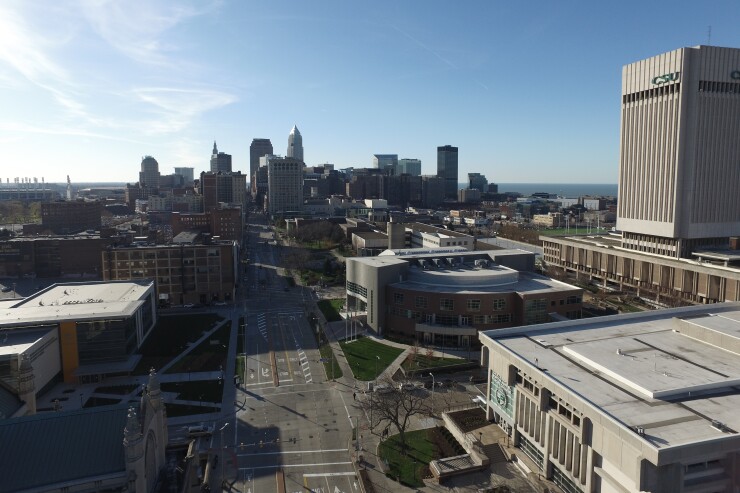 Cleveland State University in Ohio is banking on a housing play financed with a portion of a $148.8 million bond sale Thursday as part of its strategic plan to bolster its appeal and housing opportunities.

Euclid Avenue Development Corp., a unit of the university established to develop, own, and manage housing and parking facilities, will pricethe $148 million of student housing facility revenue bonds through the Cleveland-Cuyahoga County Port Authority.

Ahead of the transaction, Moody’s lowered the university’s $250 million of rated debt and the Euclid corporation’s ratings one notch to A2 and A3, respectively, from A1 and A2.

“The downgrade of Cleveland State University’s issuer rating to A2 reflects a significant increase in direct debt leverage, over 50%, with the proposed Euclid Avenue Development Corporation bonds, which are incorporated in the university’s financial statements and have a supplemental guarantee from the university,” Moody’s said.

Euclid’s downgrade stems from “the narrow nature of the revenue pledge and supplemental support agreement between it and the university, which is subject to board appropriations,” Moody’s said.

Euclid’s bonds are secured a limited revenue pledge and university support agreement in case debt service coverage falls below 1.2 times and supplemental payments made by the school are subject to Board of Trustees’ appropriation.

In March 2021, the university adopted a post-COVID strategic plan with four themes including seeking distinction for research and building its financial strengths.

Goals include bolstering enrollment to 20,000 by 2025 from the 11,913 it recorded in the fall, increasing retention and graduation rates, expanding fundraising, and expanding residential opportunities to double the percentage of students living on campus to 20% from 10% over the next five years.

Many residents of the buildings being acquired with the bond proceeds are currently CSU students.

“With both buildings going up for sale, the university opportunistically entered into a purchase agreement, with the hope of alleviating current and future housing needs,” Moody’s said. “Adding these large complexes adds an additional layer of risk, particularly given the university’s plan to rent out certain space to retailers.”

Difficult state and regional demographic trends and market competition which will “make the university’s ambitious plan to grow overall student headcount to 20,000 over the next five years more difficult” also contributed to the downgrade, Moody’s said.

The university is the city’s only four-year public university among 14 statewide which makes it strategically important to the state and benefits the rating as does overall balance sheet strengths with sound liquidity. Cleveland State University has operating revenue of $323 million

CSU’s enrollment remained relatively flat heading into the COVID-19 pandemic in 2020 thanks to competitive pricing and diverse program offerings and federal pandemic relief helped hold the line on margins in fiscal 2021. As the university exhausts the aid this year, a more modest positive impact is expected.

Applications hit nearly 14,000 for fall 2019 but dipped during the pandemic. Through May, applications for the upcoming school year had recovered to 14,000, according to an investor presentation.

S&P said its affirmation and stable outlook on EADC reflects positive operations despite COVID-19-related pressure, and its improved occupancy, which increased rental revenue and financial stability.

“CSU has experienced modest enrollment decreases during the past four years, reflecting a highly competitive market. Management has enhanced marketing and programming initiatives, which we anticipate will likely stabilize enrollment in the near term. It is our understanding that the university remains focused on enrollment growth,” S&P said.