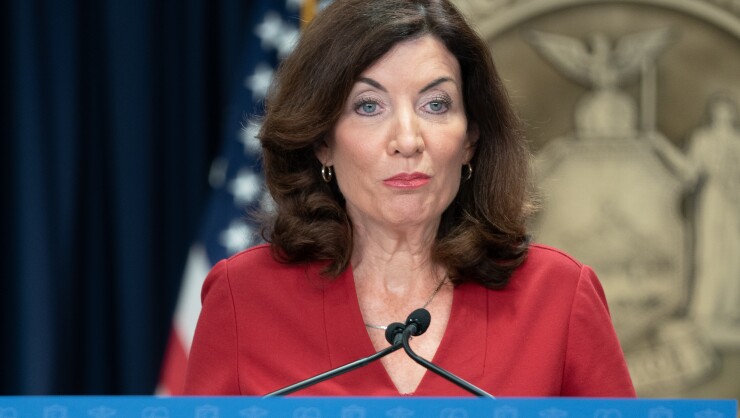 New York State is facing lower revenues and bigger budget gaps as the national economy takes a turn for the worse, according to the latest update released by the state Division of the Budget.

Still, Hochul said the state will continue to maintain the higher reserve fund deposits and balances that were planned last year. The state has strengthened these funds, which are meant to prevent service cuts or tax increases during an economic downturn.

“Like the rest of the country, New York State is facing substantial headwinds with a changing national economy, and our latest update to the enacted budget financial plan reflects that,” she said in a statement Monday.

“While the plan incorporates future budget gaps, our commitment to fiscal discipline and planning for a rainy day remains and reserve fund deposits and balances will stay at the elevated levels we have planned,” she said.

At the end of fiscal 2022, the state’s principal reserves totaled around $9 billion. Over the next three years, additional deposits of $10.4 billion will bring reserves to $19.4 billion, equal to 15% of state operating funds spending, the fiscal target set in October 2021. Reserves in fiscal 2025 exceed the projected budget gaps by roughly $6 billion.

“This update provides state leaders with a sobering view of the road ahead,” CBC President Andrew Rein said in a statement. “While fiscal year 2023 receipts are strong, downward revisions to future tax receipt forecasts opened budget gaps that grow from $310 million in fiscal year 2024 to $6.2 billion by fiscal year 2027.”

Even before the forecast revisions, the future budget balances relied on non-recurring items and optimistic tax revenue projections. The future outlook now is much more fragile, CBC said.

Some, however, were not too surprised.

“That was fast,” Peter Warren wrote in a blog for The Empire Center. ”Historically large budgetary surpluses inherited by Gov. Hochul are now just a memory, with the state now facing projected budget gaps totaling $13.7 billion over the next five years (fiscal 2023 to fiscal 2027). The new sea of red ink is due to an anticipated plunge in tax receipts resulting from the recent economic and financial market decline.”

In May, a month after the Legislature voted to adopt the fiscal 2023 budget, the Division of the Budget issued an enacted budget financial plan with a robust forecast, he wrote.

“We warned at the time that its projections of multi-billion out-year surpluses and large annual reserve fund deposits were unlikely to come to pass, primarily because they were, ‘critically reliant on sanguine economic and revenue forecasts.’ Still, the reversal in the state’s budgetary fortunes came at remarkable speed,” Warren wrote.

In recognition of the weaker economy, the annual estimates for personal income taxes (PIT) starting in fiscal 2024 have been reduced from the budget adopted in April.

However, these reductions are partly offset by a $1 billion annual increase in the withholding component of PIT, due to growth from a higher expected base in fiscal 2023.

The state will get $801 million in enhanced federal Medicaid funding for the next quarter due to the continuation of the federal public health emergency. This will offset an equal amount of state costs.

However, the emergency also allows up to 1 million New Yorkers to stay on the Medicaid rolls at an estimated cost to the state of $893 million.

While future projected Medicaid spending estimates were left unchanged, they may present an even greater risk in the future.

“It is not possible to assess or forecast the effects of such changes at this time,” the report said. “For example, the COVID-19 pandemic has led to changes in the behavior of resident and nonresident taxpayers. Consistent with the growth in remote work arrangements, many residents and non-residents are no longer commuting into New York City and instead are working remotely from home offices.”

During the pandemic some residents moved outside of the state temporarily, while some taxpayers have permanently relocated.

Under long-standing state policy, a non-resident working from home pays New York State income taxes on wages from a New York employer unless that employer has established the non-resident’s home office as a bona fide office of the employer.

“The state continues to monitor the data to understand whether these trends are transitory,” the report said.

“Where the economy and financial markets go from here is unknown. But in retrospect, it seems clear at least that the governor and the Legislature should have showed more fiscal restraint in April,” Warren wrote.

The CBC said it was sensible of the state to bulk up its reserves and it should continue on a path of financial prudence.

“Going forward, the state should seek to reduce recurring spending, especially in high-growth areas such as Medicaid and school aid, while continuing to build reserves,” Rein said.