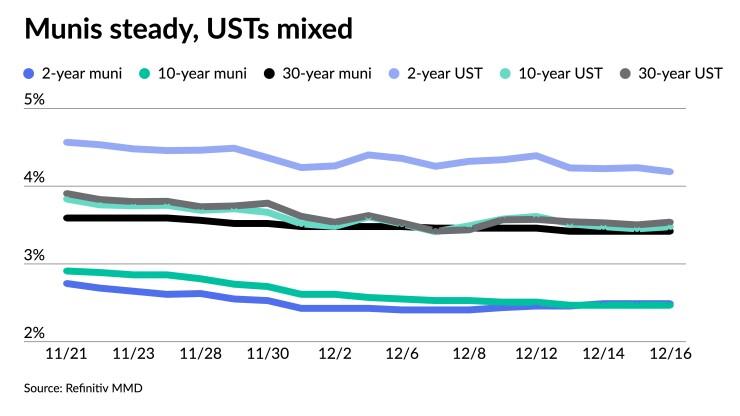 Municipals ended the week little changed ahead of a paltry new-issue calendar as the market winds down for the year. U.S. Treasuries were mixed and equities ended the week in the red.

The municipal market was already in early holiday mode judging by Friday’s pace.

“It is crickets in muniland to close out this week,” Tom Kozlik, managing director and head of municipal research & analytics at Hilltop Securities Inc. said on Friday afternoon.

Primary market activity, he said, is “all but finished” for the month. ”I am not expecting much of anything else in the next two weeks,” Kozlik added.

Instead, traders, underwriters and investors are more concerned with year-end portfolio and investment housekeeping — as well as their last-minute shopping and upcoming holiday plans — as evidenced by the quiet tone and lackluster activity.

“The only activity right now is that folks are tying up loose ends or finalizing trades or offerings,” Kozlik said.

An eventful week
“This week will likely have been the last active week of the year, but it turned out to be quite eventful,” according to Barclays PLC.

“The Fed hiked 50bps and raised the terminal target rate to a median of 5.125% for 2023 in the DOTs PLOT,” BofA Global Research strategists said in a weekly report. “At the post-meeting conference call, Chair Powell indicated a data dependent approach in 2023, and expressed the hope that inflation rates will fall to 3.5% in 2023 and then to 2%, eventually.”

BofA strategists said, “the Fed’s stance is more hawkish than the market consensus, though there wasn’t much repricing in the market of the new Fed stance post-meeting.”

“The Fed Funds Futures market continues to price only a 4.87% terminal target rate after the meeting and two Fed cuts in 2023, even though the Fed doesn’t see rate cuts in 2023,” they noted. “This seems to imply that the market believes inflation will decline faster than the Fed has suggested, and an economic downturn would force the Fed to cut rates in 2023.”

In the aftermath of the meeting, Barclays strategists expect the “Fed to raise the rate target by 50bp in February and by 25bp in March, pausing afterward through much of the next year.”

Somewhat contrary to this view, they said “fed fund futures imply that rates will peak by early summer, followed by easing that should start in late Q3; to us, these expectations sound too optimistic.”

“For munis, a stronger Fed provides more assurance that inflation will stay on a declining trajectory and is supportive of curve flattening,” BofA strategists said. “Of course, if the Fed futures market is correct in thinking that inflation will have a fast decline, that is also positive.”

“Bullish action in the muni market is now the daily norm, with light issuance and spotty mutual funds flows,” they said, noting ”it remains to be seen whether similar bullish action can be maintained when issuance volumes rise meaningfully in the new year.”

“Such a benign supply/demand dynamic will not change much until March,” BofA strategists added.

The current curve suggests “suggests that a barbell strategy should work better than a bullet strategy for the middle part of the curve. The 10-year ratio at 70% is closer to the rich end of the historical range,” BofA said.

They also suggest that duration investors should look to the long end of the curve for better performance as muni/Treasury ratios there ”still have some value.”

The 10/30 AAA curve remains ”stubbornly steep,” a situation that began in April when the muni market selloff took on an accelerated pace.

“Now that the Fed has lived up to its promise and inflation is coming down, the shunning of the long end of the curve is unwarranted,” BofA strategists said. “If duration extension was the root cause of fear during a bear market for tax-exempt investors, now duration extension should be appreciated in a bull market while the Fed stays in the driver’s seat.”

And despite the “difficult year in the muniland,” Barclays strategists are looking forward with cautious optimism.

“To us, the current lull might not persist for very long as we expect Treasury rates to move meaningfully higher in the first half of the year,” they said.

Calendar stands at $212M
Investors will be greeted Monday with a new-issue calendar estimated at $212.2 million
.
There are $165.6 million of negotiated deals on tap and $46.6 million on the competitive calendar.

The negotiated calendar is led by $71.8 million of Evergreen Charter School Project bonds from the Town of Hempstead Local Development Corporation, followed by $71.7 million of GOs from Rockwall, Texas.

Christine Albano contributed to this story.